Is Tel Aviv attack revival of the Jerusalem intifada?

The latest Tel Aviv attack has raised questions about the Palestinian party standing behind it, as some claim it was an individual operation. 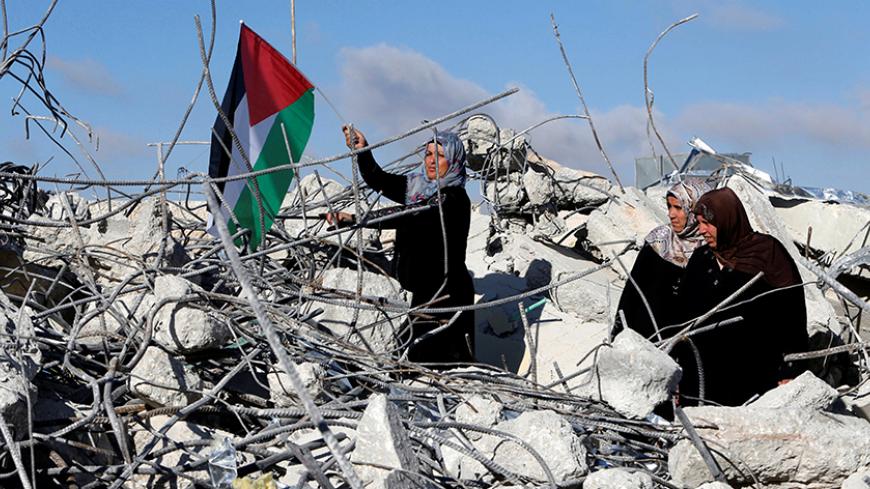 The mother of a Palestinian assailant holds a Palestinian flag as she stands in the rubble of her house after it was demolished by Israeli forces in the West Bank village of Yatta, south of Hebron, June 11, 2016. - REUTERS/Mussa Qawasma

The pace of the attacks against Israelis during the Jerusalem intifada, which broke out in October 2015, has been increasing at times and decreasing at others. Up until early March, 620 attacks had been carried out in the West Bank, Gaza Strip and Jerusalem, resulting in the death of 33 Israelis and 209 Palestinians.

The Tel Aviv attack June 8 was the most ruthless Palestinian armed attack against Israelis, targeting a shopping mall in Tel Aviv, a short walk from the headquarters of the Israeli Ministry of Defense. Cousins Mohammad and Khaled Mahamra from the town of Yatta in Hebron governorate were able to pass through the security measures and the Israeli military checkpoints, and started shooting at people killing four Israelis and wounding six others.

On June 9, the Israeli government promptly decided to impose a series of collective punishments on the Palestinian residents of Yatta. Most importantly, Israel imposed a complete siege on the city and revoked the work permits of the perpetrators’ family as well as 83,000 permits from residents of Yatta and other Palestinian cities. The Israeli government had granted the Palestinians these permits allowing them to visit the West Bank and pray at Al-Aqsa Mosque during the month of Ramadan.

Othman Abu Sabha, Palestinian National Initiative leader and an influential figure in Yatta, told Al-Monitor, “The Israeli measures imposed on Yatta include sand berms and military checkpoints blocking all entrances to the city and a siege that was not even imposed at the height of Al-Aqsa intifada in 2000. The fact that Israel is making the city’s residents suffer this much expresses a retaliatory Israeli approach to punish the perpetrators’ hometown. The siege is still imposed and it has resulted in heavy economic losses for the city. Many plants, factories and shops are located in Yatta, and the siege impedes the import and export movement.”

Also on June 9, Hamas, Islamic Jihad and the Popular Front for the Liberation of Palestine said in separate statements that they believe the Tel Aviv operation to be a natural response to the Israeli crimes in the West Bank and Gaza Strip. They stressed that the Jerusalem intifada is still ongoing and will not be stopped by the Israeli arrests. For its part, Fatah considered the operation to be an individual response and spontaneous reaction to the use of violence adopted by Israel.

However, the Palestinian Authority (PA) expressed its rejection of operations affecting civilians from any party whatsoever and whatever the justifications, calling for not resorting to violence or any action that would increase tension.

On the same day, Israelis demanded the enactment of a law to move the perpetrators’ parents from the West Bank to Gaza and called on Israel to take radical action and security measures based on harsh retribution that would remain etched in the minds of the Palestinians.

Samira Halayqa, a member of the Palestinian Legislative Council for Hamas in Hebron, told Al-Monitor, “Israel is not waiting for pretexts to impose sanctions on the Palestinians, such as the recent Tel Aviv operation. The occupation is the main reason for the continuation of these violations against the Palestinians, before and after the [Tel Aviv] operation.

The Tel Aviv operation also sparked a debate among the Palestinians. Some thought it may contribute to turning the current intifada into armed operations that would be a prelude to the coming stage and that the resistance action must regain its central role. Others, however, considered that this operation would reignite a controversial debate whereby Palestinians targeting Israeli civilians may be used as a pretext by Israel, which claims that the Palestinians are engaging in violent acts and not in legitimate resistance.

A Palestinian minister told Al-Monitor on condition of anonymity, “The Palestinian resistance is undisputedly a legitimate right. But the Tel Aviv operation came at the wrong time as it coincided with terrorist operations carried out around the world, most notably, the attack in Istanbul in early June that killed 11 Turks. This could give Israel the opportunity to claim that the Palestinian resistance is the same as terrorism that is rejected by the entire world.”

The Tel Aviv operation took place only two days into the holy month of Ramadan. Before that and specifically in early May, Israel had warned about escalation in Palestinian attacks against Israelis and deployed more Israeli troops in the West Bank in anticipation of further operations.

According to preliminary Israeli estimates, the Tel Aviv operation was an individual attack carried out by two Palestinian cousins from the city of Yatta who are not backed by a specific Palestinian organization, even though they are known to be Hamas supporters. But even when Hamas itself gave the operation its blessing, it did not claim official responsibility for it.

Hani al-Masri, the director of the Palestinian Center for Policy Research and Strategic Studies - MASARAT, told Al-Monitor, “The Tel Aviv operation confirms that Palestinian individual operations are increasing, which requires a research on their causes and motives instead of rushing to condemn or support them. One must also think carefully about the targeting of civilians in Israel, so the Palestinian resistance can be deliberate and not random. It should not target children and public places, and [resistance action] should go in line with the Palestinian cause and its moral superiority as there are 1.5 million Palestinians with Israeli citizenship and Jews who reject the Zionist project.”

The Tel Aviv operation will not soon be forgotten, and repercussions continue to take their toll in light of the ongoing siege imposed on Yatta, while Israel continues to cooperate with the PA’s security services when arresting Palestinians in the West Bank whom Israel suspects of planning armed attacks against it.