Will Hebron become 'the capital of the intifada'?

Hebron, the largest West Bank city, might be just a few steps away from conducting armed confrontations against the Israeli army. 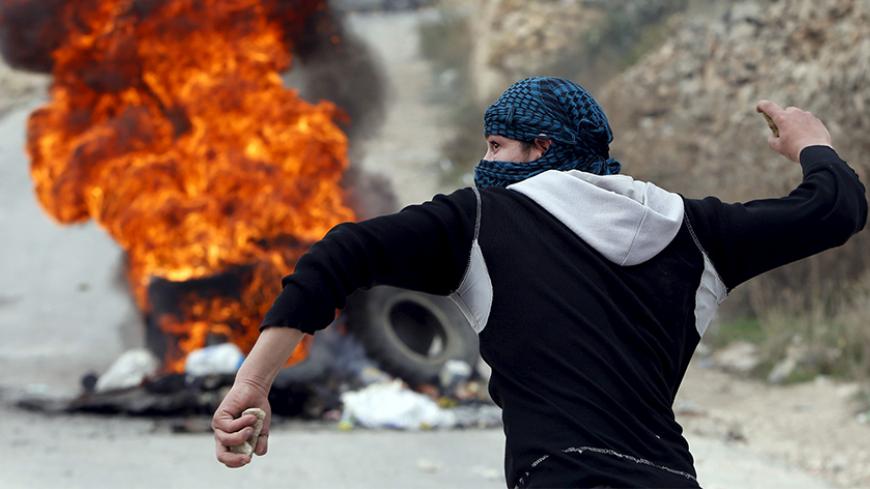 A Palestinian protester hurls stones at Israeli troops during clashes in the West Bank city of Hebron, Nov. 6, 2015. - REUTERS/Mussa Qawasma

The Hebron governorate, in the southern West Bank, has joined the action in the intifada that erupted in early October. Participation of the residents of the Hebron area was expected, given its long record in pioneering the Israeli-Palestinian clashes in the two previous intifadas, in 1987 and 2000.

Hebron is the largest West Bank city, and its population is estimated at between 200,000 and 270,000 people. The Israeli army has closed many parts of the city and deployed its troops there; it controls 20% of Hebron’s surface area as per the 1998 Wye River Memorandum between the Palestinian Authority (PA) and Israel. The city is bordered by several Israeli settlements, mainly the Kiryat Arba settlement. Hebron accommodates around 850 settlers.

A long history of bloody events is engraved in the memories of Hebron’s citizens. The worst was the Ibrahimi Mosque massacre, which took place on Feb. 25, 1994, and was committed by Israeli physician Baruch Goldstein, who shot 30 Muslim worshippers and wounded dozens.

Hebron is often in the news because of the permanent presence of settlers in the city, and the deployment of a large number of Israeli soldiers whose duty is to protect these settlers.

Samira al-Halayka, a member of Hebron’s legislative council, told Al-Monitor, “The Israeli measures in Hebron — which include isolating the city and cutting it off from the world through checkpoints, detaining the corpses of Palestinians and killing the youths in cold blood — are a form of systematic targeting that aims at halting the intifada. It is noteworthy that Israel considers Hebron the heart of the intifada.”

Since the start of this intifada, Hebron’s Palestinians executed 23 stabbings and run-over attacks, and 70 Palestinians across the occupied territories — including 25 Hebron residents — have been shot dead by Israeli soldiers. More than 1,100 people have been wounded during the clashes with the Israeli army along 19 front lines in Hebron and on its borders.

On Oct. 24, the Israeli media described Hebron as “the capital of the intifada” due to the increased stabbings there; its residents are perpetrating more operations against Israelis than in the other West Bank cities.

Hebron is making the intifada’s headlines for another reason also, which is related to the tribal dimension that has entered into the popular uprising. As a result, the intifada has gained momentum that clearly appeared in the protest, which the city’s tribes called for in order to bring back the bodies of the Palestinians detained by the Israeli army Oct. 31.

Hamas spokesman Husam Badran told Al-Monitor, “The wide public participation in the funeral procession of Hebron’s martyrs is a tangible representation of the choice of resistance and a strong message for Israel that its oppressive measures and collective punishments will not affect Hebron — the popular and national hub of the resistance project. This huge participation also reasserts that the attempts to circumvent the intifada will fail. Hebron’s wide engagement in that public protest only proved this point.”

A Palestinian security official told Al-Monitor on condition of anonymity about the signs that are paving the way for Hebron to increase its participation in the intifada, compared with previous weeks. He said, “Despite the intensive deployment of Palestinian security in the city, its forces do not control Hebron like the other cities of the West Bank such as Ramallah and al-Bireh. Hamas enjoys the support of many of Hebron’s citizens. Moreover, the daily clashes between Palestinians and settlers in a city inhabited by thousands of Palestinians could blow up the situation any minute.”

The Israeli army was afraid that the situation in Hebron would blow up, and in late October called for military reinforcements. Between Oct. 15 and Oct. 21, the army launched a series of arrests against dozens of Palestinians, including former detainees and university students, after raiding their houses, searching them and tampering with their belongings. The arrests included several towns of Hebron such as Beit Ummar, Beit Awwa, Beit Kahil and Dura. The Israeli army deployed military patrols in the streets and set up checkpoints.

Bilal al-Shawbaki, political science professor at Hebron University, brought up an important discussion on his Facebook page on Oct. 30 to discuss the important reasons behind Hebron’s pivotal role in the current intifada. He said that the city’s institutions embraced the popular uprising and that Hebron University supported the students’ engagement in the intifada.

Ali al-Zarou, a Hebron citizen, told Al-Monitor, “The foot patrols of the Israeli army are deployed in al-Shuhada Street in Hebron. They are ready to shoot any time to ensure the security of the settlers. The name, license plate number and identity card of any Palestinian who enters the street are registered on special lists located on cement blocks in the street. The army forbids any person whose name is not on the list from entering.”

The Hamas-affiliated Al-Resalah newspaper on Oct. 29 described Hebron’s citizens as the most religious among the West Bank’s Palestinians. Hebron is also considered a Hamas stronghold in the West Bank, in light of the citizens’ wide support for the movement. This prompted the PA and Israel to impose stricter security measures to forbid any chances of Hamas’ rise in the city or its implementation of infrastructure renovation, following Hamas’ abduction and murder of three settlers in June 2014.

Nothing indicates that the Israeli army will be able to stop Hebron’s involvement in the intifada. On the contrary, it seems the city is trying to carry out more stabbings and attacks where Israeli soldiers and settlers are run over with vehicles despite Israeli security measures to limit these attempts. As a result, the city might be a few steps away from conducting increased armed operations against Israelis.