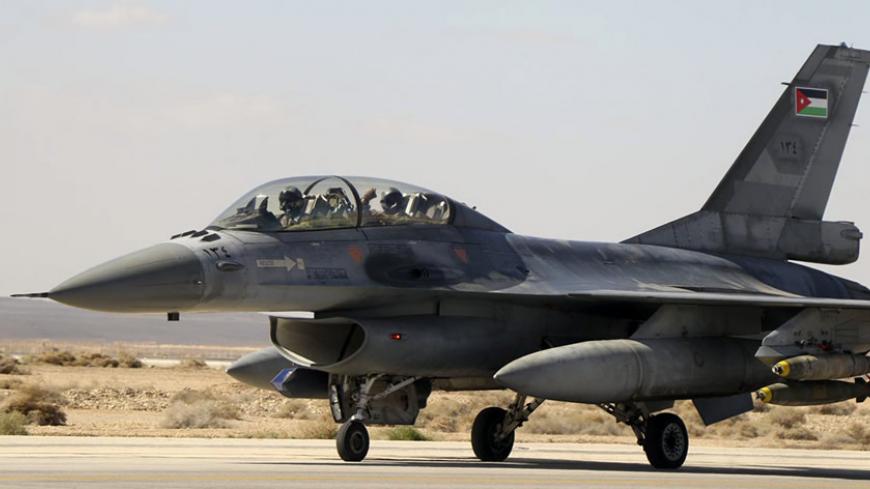 A Royal Jordanian Air Force plane takes off from an air base to strike the Islamic State in the Syrian city of Raqqa, Feb. 5, 2015. - REUTERS/Petra News Agency

The International Syria Support Group on Nov. 14 “expressed a unanimous sense of urgency” to end the war in Syria following terrorist attacks in Paris the day before that killed at least 129 people.

French President Francois Hollande said the killings were an “act of war” and promised “merciless” retaliation against the Islamic State (IS), which claimed responsibility for the attacks.

The terrorist assault in Paris came just one day after two explosions in the Burj el-Barajneh Shiite neighborhood of Beirut took at least 43 lives, as reported by Ali Hashem for Al-Monitor.

IS has claimed responsibility for both acts of terrorism.

The mass murders in Paris gave new charge to international discussions about Syria. The second meeting of the 19 parties now called the International Syria Support Group agreed in Vienna on a target start date of Jan. 1 for negotiations between the Syrian government and opposition members about a political transition, including elections and a new constitution within 18 months. The five permanent members of the UN Security Council agreed to back a cease-fire in those parts of Syria not under the control of terrorists.

Jordan, for some reason, was tasked with taking the lead on determining which groups, in addition to IS and Jabhat al-Nusra, will be designated as terrorists, per Article 6 of the Vienna Communique — which reads “Da'esh [IS], and other terrorist groups, as designated by the U.N. Security Council, and further, as agreed by the participants, must be defeated.”

David Ignatius wrote this week in the Washington Post, “The finesse point is deciding whether a militant Islamist group called Ahrar al-Sham, which is backed by the Saudis and Qataris but sometimes fights alongside the extremists, should also be on the blacklist. The United States and Britain seem willing to treat Ahrar al-Sham as a part of the solution, rather than the problem, if it behaves more responsibly.“

It might be time for a strategic pause if the United States is indeed advocating for Ahrar al-Sham to be included in the Syria talks. Doing so as a concession for Saudi Arabia and Qatar, if that is the deal, won’t cut it. Salih Muslim, leader of the Syrian Kurdish Democratic Union Party, told Al-Monitor’s Amberin Zaman last month that Ahrar al-Sham is “no different” than IS. The membership of groups such as Ahrar al-Sham and Jaish al-Fatah (Army of Conquest) is fluid and includes those, at a minimum, who are fellow travelers with IS and Jabhat al-Nusra. The United Nations and other independent agencies have documented the increased collaboration between Jabhat al-Nusra and armed groups backed by the United States and its allies in military operations against the Syrian government.

Further to the point is a report from Aleppo by Edward Dark (a pseudonym) that IS and Jabhat al-Nusra may have been coordinating to thwart Syrian military advances last week around Aleppo, which included Syria’s retaking of the town of Al-Hader and Kweiris air base.

“In what is an ominous harbinger of what may be yet to come as a consequence of Russian military intervention, former sworn jihadi enemies cooperated in severing the route. While the Islamic State (IS) attacked with suicide car bombs and captured large stretches of the “soft target” road near Athria town, Jabhat al-Nusra and other Islamist factions launched an attack at its entrance into Aleppo city at Ramouseh. The Syrian army and its allied paramilitary forces had been on the offensive to the south of the province, making convincing gains both in IS-held and rebel-held territory backed by heavy, daily Russian airstrikes. It was this shared existential threat that convinced the jihadi groups to put aside their deadly differences, at least for now, and could signal a new and worrying trend,” Dark writes.

This column has warned for nearly two years about the mainstreaming of Syrian jihadi groups and the unsettling campaign to make them party to the Syrian endgame. Perhaps what we are learning about the terrorist bombings in France offers further guidance to the difficulties, and pitfalls, of using a sliding scale for tagging radical jihadis. One of the suspects in the Paris attacks, Ismail Omar Mostefai, had been on the watchlist by French authorities and arrested eight times before he went to fight in the jihad in Syria in 2013 and dropped off the radar. The manhunt in Belgium and throughout Europe seems to indicate that at least some of those involved were suspected or associated with radical groups. The assailants who killed 12 at the Charlie Hebdo offices in January had a well-documented record of crime and association with extremists.

So how can the Hashemite Kingdom of Jordan, and others, make the call on who may or may not be a "terrorist" in Syria, given the fluidity of the current armed groups, and the difficulties that France — which has among the best police and security networks in the world — has had in tracking and pre-empting terrorists on their own soil? Saudi Arabia and Qatar, which maintain close ties to Jordan, may be making the case not only that Ahrar al-Sham and the Army of Conquest get a pass on being tagged a terrorist group, but that they should also be at the table for political discussions on Syria’s future. The International Syria Support Group should not give in on this one. A pass on the terrorist stage, and a seat at the Syria table, should not be compared to a ticket to purgatory, where you get a kind of test to see if you might come out OK on the other end. That is not the record to date, especially after Paris. The enemy in Syria is cold-blooded and ruthless, and we cannot afford to be naive by applying a sliding scale to its evil ideology.

Hebron, Jerusalem flashpoints for the intifada

Adnan Abu Amer reports this week, “Since the start of this intifada, Hebron’s Palestinians executed 23 stabbings and run-over attacks, and 70 Palestinians across the occupied territories — including 25 Hebron residents — have been shot dead by Israeli soldiers. More than 1,100 people have been wounded during the clashes with the Israeli army along 19 front lines in Hebron and on its borders.”

Daoud Kuttab explains the linkages between Hebron and Jerusalem as the front lines of the Palestinian uprising. He writes, “The bond between Jerusalem and Hebron can be felt on every street of the two cities. Hebronites are an integral part of Jerusalem, and as a result, anything that happens in the city is felt through blood and other relationships in Hebron. Israel might have partially succeeded in isolating Jerusalem from most West Bank cities with its policy of barring Palestinians from those cities from entering Jerusalem. The case of the Hebronites, however, is different, as many of them are Jerusalem residents. Israel is therefore unable to stop their movement, making the bond between the two cities unshakable. This bond, now cemented with bloodshed, will hold despite the erection of walls and restrictions on movement. In fact, the Hebron-Jerusalem alliance is now deeper than at any other time since the occupation began.”

Abu Amer notes that Hebron is considered a Hamas stronghold. “This prompted the PA and Israel to impose stricter security measures to forbid any chances of Hamas’ rise in the city or its implementation of infrastructure renovation, following Hamas’ abduction and murder of three settlers in June 2014,” he reports.

Abu Amer continues, “Hebron is making the intifada’s headlines for another reason also, which is related to the tribal dimension that has entered into the popular uprising. As a result, the intifada has gained momentum that clearly appeared in the protest, which the city’s tribes called for in order to bring back the bodies of the Palestinians detained by the Israeli army Oct. 31. Hamas spokesman Husam Badran told Al-Monitor, ‘The wide public participation in the funeral procession of Hebron’s martyrs is a tangible representation of the choice of resistance and a strong message for Israel that its oppressive measures and collective punishments will not affect Hebron — the popular and national hub of the resistance project.’”

On Nov. 4, Hamas leader Khaled Meshaal told a small group of journalists, including Al-Monitor, that Hamas seeks a unified Palestinian command and that he hoped the intifada would facilitate Fatah-Hamas reconciliation. “Hamas believes in all of the resistance’s choices and in the importance of coordinating efforts under a united command to increase the intifada’s efforts,” Meshaal said.

Asmaa al-Ghoul reports this week from the Gaza Strip on the Islamic Jihad’s efforts to assert its claim to leadership of the intifada in Gaza. Ghoul reports that the Islamic Jihad has organized nine rallies independently, without partnering with Hamas or the Popular Front for the Liberation of Palestine, as is usually the case. The rallies, according to Ghoul, “go beyond any demarcation line of Israeli forces in supporting and energizing the intifada from afar. For instance, one rally was called Hebron Martyrs’ Friday, which is also reflective of the group's adopted practice of individually naming marches held every Friday.”

Islamic Jihad spokesman Daoud Shihab told Ghoul, “It is wrong to talk about rocket firings from the Gaza Strip now. Let us allow the intifada to run its course, within the framework of popular resistance. … But in principle, we have not ruled out the use of arms, as we are at the heart of a resistance action. Taking up arms will come at the right time.”

Ahmad Melhem reports from Ramallah that Palestinians have lost confidence in the Palestine Liberation Organization. Melhem writes, "A poll carried out Nov. 6 by the Arab World for Research and Development showed that 64% of those who participated in the poll support canceling the Oslo Accord, while two-thirds believe that the PA [Palestinian Authority] will not end its commitment to the agreement, especially with regard to ending the security and economic coordination and the dissolution of the PA itself. Palestinians have doubts about the PLO’s ability to make important decisions to determine the relationship with Israel, including ending the security and economic coordination and canceling the Oslo Accord — in light of its weakness and declining role before the PA — despite its constant threats to do so.”