Jerusalem and Hebron: A tale of two cities

East Jerusalem and Hebron are bound by familial ties and shared solidarity from their experiences under Israeli occupation. 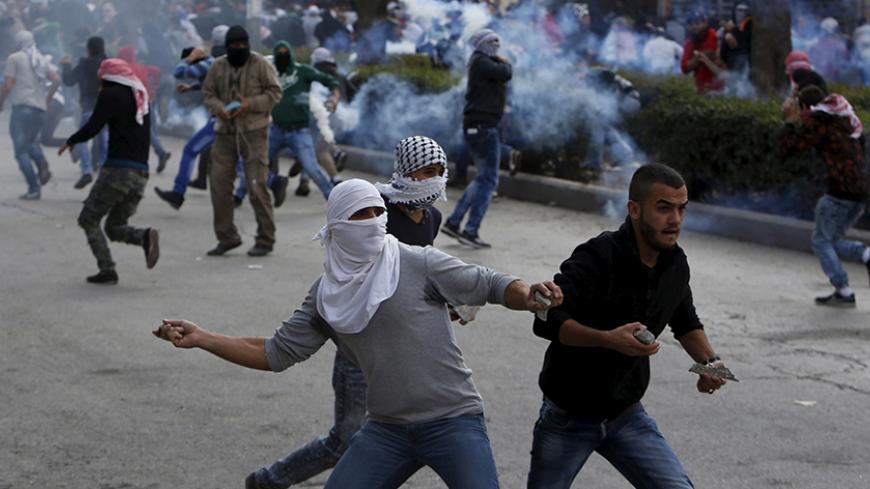 Palestinian protesters hurl stones toward Israeli troops during clashes in the West Bank city of Hebron on the day that a wave of violence extended throughout Jerusalem, Oct. 30, 2015. - REUTERS/Mussa Qawasma

The story of the Palestinian uprising that began Sept. 13 with protests against Israeli intrusions at the Al-Aqsa Mosque compound on the Jewish New Year is actually the story of two cities — Jerusalem and Hebron.

Of the 84 Palestinians listed by Shfa News as having been killed by Israelis as of Nov. 9, the majority, 57%, are from Jerusalem and Hebron. The 30 Palestinians killed in the Hebron area represent 36% of the current death toll, while the 18 killed in Jerusalem constitute 21% of those whose lives have been cut short by the Israelis.

The protests that spread throughout the West Bank and Gaza may have begun in Jerusalem, but the bulk of the Palestinians resisting the Israeli occupation and paying the ultimate price come from Hebron. What is it about Jerusalem and Hebron that unites them at the forefront of the struggle against Israeli military forces and the Jewish settler population?

From the start of the Israeli occupation in June 1967, these two cities have been the most affected by the illegal drive to settle Jews at their heart. After the Israelis captured Jerusalem's Old City on June 7, they razed the Mughrabi Quarter, adjacent to the Western Wall and where many Palestinians originally of Moroccan origin lived. The Israelis also reclaimed the Jewish Quarter and have since forbidden non-Jews to live there.

In 1978, the Israeli high court denied a Palestinian, Mohammad Burqan, the right to repurchase his own house in the Mughrabi Quarter, which is adjacent to the Jewish Quarter, because the expanded Jewish Quarter has, as the Israeli court ruled, “special historical significance” to Jews and “supersedes all other claims by non-Jews.”

Of course, Jews now live in all quarters of the Old City and in all the Palestinian neighborhoods outside its walls in East Jerusalem. It was outside a home that Ariel Sharon had bought in 1987 in the Old City neighborhood of al-Wad, in the Muslim Quarter near al-Aqsa Mosque, that the first stabbing in the recent unrest took place, on Sept. 13.

A similar usurpation was witnessed in Hebron, where the first Jewish settlers, Rabbi Moshe Levinger and his wife, arrived disguised as tourists staying at the Park Hotel in 1968. They soon revealed themselves and began a process of settlement that has since seen more than 500 Jewish settlers take over numerous homes and locations in the center of the city. A much larger, 5,000-strong settlement was built nearby in Kiryat Arba.

The settlement drive is not the only aspect of the occupation that ties Hebron and Jerusalem. Ani al-Qaq, a Jerusalem resident and former Palestinian ambassador to Switzerland, told Al-Monitor that the struggle for freedom has forced Palestinians in both places to stand at the forefront against the occupying soldiers and settlers. “Hebronites and Jerusalemites both share the same repressive situation. Their holy places are constantly being challenged. Their homes are taken, there are checkpoints and settlers everywhere, and Palestinians on both sides experience humiliation on a daily basis,” Qaq said.

A member of the Palestinian National Council, Qaq credits Mufti Amin al-Husseini for his efforts in the 1920s for strengthening the Arab presence in Jerusalem by encouraging Hebronites to move to the city. “People of Jerusalem and Hebron have a strong bond. There are many common issues between them, including family relations,” Qaq said, adding that as a result of the movement of people and marriage, Hebron and Jerusalem are the “most socially connected cities” in Palestine.

Riyad Khamis, director general of Radio 4 in Hebron, noted that the relationship between the cities has existed for centuries. He said it began because of the holy places in both of them, but further developed because of family relations to the point that Hebronites are the Palestinian majority in Jerusalem. “More than 70% of the population of our capital, Jerusalem, have Hebron origins,” he told Al-Monitor.

The issues surrounding the prominent mosques in these cities are of great significance to the people. When Palestinians in Jerusalem have expressed concerns about Israeli intentions for the Al-Aqsa Mosque compound, they are usually referring to what is happening at the Ibrahimi Mosque. Jerusalem resident Khader Qiresh examines Hebron under occupation in a detailed study he published Sept. 1 on the Maan News website. In his reporting, he warns that what Israel has done at the Ibrahimi Mosque could also happen in Jerusalem.

“Since 1994, the Israelis have taken away total Palestinian control of the mosque, and now it is divided temporally and spatially between Muslims and Jews,” Qiresh wrote. “The fact that Arabs and Muslims were silent and unable to stop what happened in Hebron means that Israel might be able to do that at Al-Aqsa in the future.”

The bond between Jerusalem and Hebron can be felt on every street of the two cities. Hebronites are an integral part of Jerusalem, and as a result, anything that happens in the city is felt through blood and other relationships in Hebron. Israel might have partially succeeded in isolating Jerusalem from most West Bank cities with its policy of barring Palestinians from those cities from entering Jerusalem. The case of the Hebronites, however, is different, as many of them are Jerusalem residents. Israel is therefore unable to stop their movement, making the bond between the two cities unshakable.

This bond, now cemented with bloodshed, will hold despite the erection of walls and restrictions on movement. In fact, the Hebron-Jerusalem alliance is now deeper than at any other time since the occupation began.