Palestinians are being increasingly barred from the Al-Aqsa Mosque compound, leading many to question Israel's intentions. 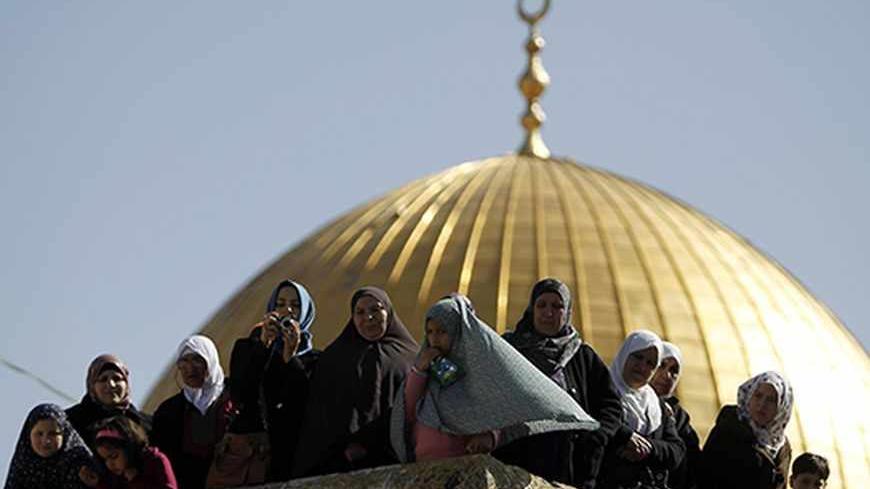 The Dome of the Rock, on the compound known to Muslims as Haram al-Sharif and to Jews as the Temple Mount, in Jerusalem's Old City, is seen in the background as Palestinian onlookers survey a protest on Feb. 8, 2013. - REUTERS/Ammar Awad

Declaring a problem to be dangerous always brings to mind the story of the man who repeatedly, but falsely, warned his fellow villagers about a wolf, only to find a lack of response when the wolf does in fact appear. This seems to be the situation unfolding in Jerusalem these days, specifically at the Haram al-Sharif compound, the site of Al-Aqsa mosque — the third-holiest mosque in Islam.

The Haram al-Sharif, or Noble Sanctuary, is a walled area comprising one-sixth of Jerusalem's Old City. The 35-acre compound includes mosques, museums, gardens and religious schools. For 46 years, Israelis and Palestinians have been able to agree on how to manage this extremely sensitive religious area.

Since the Israeli occupation that began in June 1967, the understanding has allowed for the leadership of the Islamic waqf, or religious endowment, to run the affairs of the mosque and regulate visitors to it. This has been accomplished without Israel ceding what it considers to be its sovereignty over and right to east Jerusalem, which it annexed unilaterally within weeks of its occupation.

Guards from Jordan's Ministry of the Islamic Waqf are stationed at all but one of the compound’s entrances alongside Israeli police. The exception is the Mughrabi gate, which is connected by a controversial bridge down to the huge plaza — created through Israel’s demolition of the Mughrabi quarter, including a historic mosque — in front of the Western Wall, which Jews believe is the only remaining remnant of the Jewish Temple.

The decades-long understanding has been shaken in recent years as the Israelis, who have exclusive control over the Mughrabi gate, have been directing tourists and Israelis to use that gate rather than the other official, authorized entrances. This means that entrance to the Islamic site is not regulated on the basis of respect, such as appropriate dress; time, i.e., no entry during prayers; or finances, as entrance at authorized gates for tourists is fee based, but free at the Mughrabi gate.

Initially the problem of Israelis and Jewish zealots entering the compound was restricted as a result of a religious edict forbidding religious Jews entry for fear that they might desecrate the remnants of a holy Jewish site.  According to a Sept.  21 article in The New York Times, “Israel’s chief rabbinate still maintains the Mount is off limits to Jews — a sign saying so is posted at the gate.”

Some religious groups and rabbis have decided, however, that certain locations on the compound can’t possibly be problematic and therefore have given their blessing to walking on these areas.

Trouble increased this year with the election of Israeli extremists to the Knesset, some of whom are now part of the Benjamin Netanyahu government. In the eyes of these religious politicians, the right of Jews to access the area they call the “Temple Mount” should not be conceded. Radical Jews repeatedly provoke members of their faith by claiming that Jews have no rights on the Temple Mount. As a result, not only are religious Jewish extremists trying to make regular visits to the Haram al-Sharif, but so are more mainstream Israeli Jews.

Palestinians strenuously object to this development and have tried to stop it through a physical presence. Israeli security forces regularly assess the situation, and if they find it dangerous they ban entry from the Mughrabi quarter. Their decisions of late have been less frequent and have favored restricting Palestinians' entry rather than blocking entry from the only unregulated gate.

Political pressure on the police from the Israeli government and Knesset appears to be aimed at softening Palestinian resistance in an attempt to get them to accept a new understanding. Israeli police are increasingly barring all Palestinians from the entire compound to allow Israelis and Jewish groups to enter uninterrupted.

The biggest fear for Palestinians is that Israel will try to apply a shared-time arrangement to allow Jews to pray in the area of Al-Aqsa Mosque. This situation could evolve into one similar to that at Hebron's Ibrahimi Mosque, where Muslim control over their own mosque compound will be divided with the Israelis, who make all the decisions regarding who prays and when.

The nightmare is that this would be followed by the building of a Jewish structure on the mosque compound, and then ever so slowly, the issue of rebuilding the Jewish Temple on the site of Al-Aqsa will arise.

What is happening in Jerusalem and at Haram al-Sharif requires wisdom and respect for the status quo that has prevailed for decades. Any change is sure to bring about trouble. This is not crying wolf. This is real.