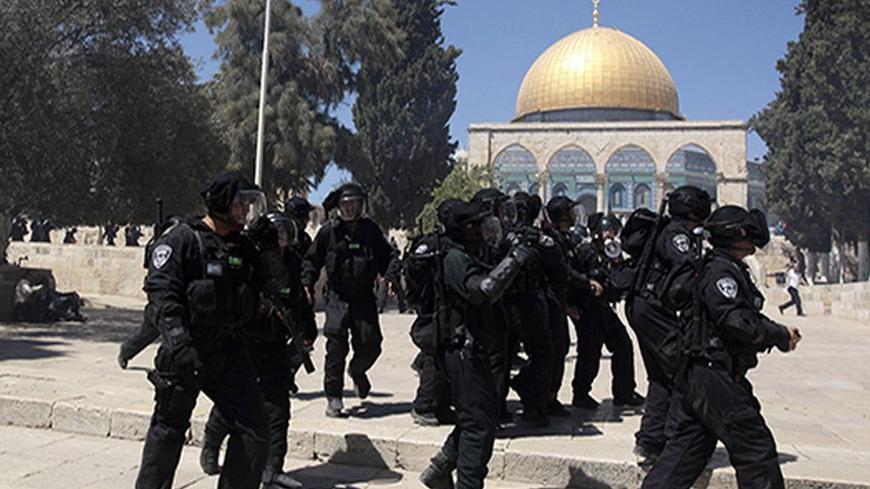 Israeli policemen react during clashes with Palestinians on the compound known to Muslims as the Noble Sanctuary and to Jews as the Temple Mount in Jerusalem's Old City, Sept. 6, 2013. - REUTERS/Ammar Awad

The world’s preoccupation with Syria and the ongoing Palestinian-Israeli peace talks have provided radical Israelis with the long-awaited opportunity to establish a regular Jewish presence on land around Islam’s third-holiest mosque, which they consider the holy Jewish Temple Mount. What was a once-in-a-season infiltration by radical Jews has now become a nearly daily affair often involving mainstream Israelis.

Israeli security forces are also carrying out unprecedented closures of the entire mosque area to accommodate the growing interest of mainstream Jews rather than a few radicals. As extreme political forces within Prime Minister Benjamin Netanyahu's government and the Knesset have cemented their power, the Israeli police have raised the security flag less and less often. The chief of Israeli police has the right to judge whether he feels that the entry of Jews into the mosque compound would cause a security risk.

One of the most active opponents of the constant Israeli actions is an Israeli citizen. Sheikh Raed Salah, the former mayor of the Arab-Israeli city of Um al Fahm, has created an organization to defend the rights of Muslims and their properties in Jerusalem and Israel at large.

Initially, every time Jewish groups announced that they intended to visit what they call the Temple Mount, Jerusalem Palestinians, as well as other Palestinian Israeli citizens like Salah, would make calls to their supporters to be vigilant and stand up to the invaders of the mosque area. However, with time and with a consistent Israeli strategy of arrests and court orders, the Palestinian opposition has weakened. This gave Israeli radicals an appetite to further challenge the Palestinians and create a new de facto situation on the ground.

One of the ways to weaken the Palestinian resolve was simply to arrest some of the more vocal leaders. Another was to issue restraining orders preventing them from entering the mosque compound, the Old City or even the entire city of Jerusalem.

The visits to the mosque compound normally escalated during the Jewish holidays. But now, instead of merely arresting Palestinian leaders or issuing a restraining order, the Israelis have carried out an unprecedented act. They practically closed off the entire mosque area by banning the entry of men under the age of 50 for the period that Jewish visitors were planning to stay on the mosque compound.

Al-Haram al-Sharif, "Noble Sanctuary," is a sacred space in Jerusalem’s Old City that contains Al-Aqsa Mosque, Islam’s third holiest mosque, the Dome of the Rock, the Islamic Museum and other historic buildings and courtyards. Israel, which occupied Jerusalem in 1967, has had a implicit understanding with the Jordanian-run Islamic waqf department that regulates how this sacred area is to be used. Every gate to the compound except one is guarded by both an armed Israeli police officer and an unarmed Palestinian guard on the Jordanian Waqf Ministry payroll.

The exception is the controversial Mughrabi gate, which was initially used very little but has become the only gate for Jews and other tourists, causing major problems for the regulation of tourist visits to the mosque compound. The main gates allow a set time for tourist visits, which are arranged so as not to coincide with Islamic prayers. Tourists using all gates except the Mughrabi gate are obliged to dress modestly and pay an entrance fee. None of these conditions apply to Jews and others entering the mosque compound using the exclusively Jewish-controlled gate connected to the Western Wall area by a controversial bridge that UNESCO has complained about. A planned visit by a UNESCO delegation to review the status of the bridge was abruptly denied by Israel with no explanation. The visit had been arranged as a compromise to avoid an anti-Israel decision by the Paris-based international cultural organization.

For Palestinians and Muslims, what is happening in regard to the frequent unregulated and provocative visits to the Haram al-Sharif compound is a sign that Israel is planning to press ahead with more unilateral arrangements.

The experience in Hebron, where the Israeli army has divided the historic Ibrahimi mosque grounds in a time-sharing system, is a worrisome precedent. International volunteers in Hebron report regularly that Israeli troops are violating even their own stated policy of keeping the Ibrahimi mosque grounds open exclusively for Jews and Muslims for 10 days a year each, during their important holidays. Last Ramadan, Israelis violated that regulation and cut short the Palestinian Islamic presence at their own mosque.

The absence of any arrangements to resolve problems that suddenly arise has played into the hands of the Israelis, who regularly push for changes while the security forces and courts are working overtime to ensure that Palestinian resistance to these infringements is weak. The current situation on Al-Aqsa mosque is a loose cannon which begs attention. If no agreement takes place soon, another violent eruption will occur.