The visit by extreme-right Israeli politician Moshe Feiglin to Al-Aqsa Mosque is yet another example of empowered Jewish extremists seeking to change current agreements over Islam’s third-holiest shrine. 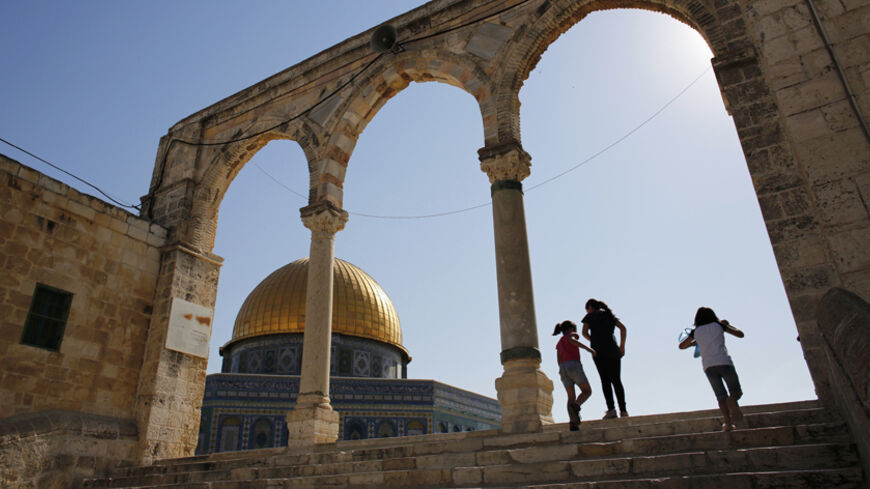 Palestinian girls walk up stairs near the Dome of the Rock (L) on a compound revered by Jews as the Temple Mount and by Muslims as the Noble Sanctuary, in Jerusalem's Old City, June 23, 2013. - REUTERS/Darren Whiteside

When Moshe Feiglin, deputy speaker of the Israeli Knesset, set foot in Al-Aqsa Mosque around 10 a.m. Sept. 14, he was on more than a tourist visit. His venture to the mosque and short prayer in the area was seen as an attempt to declare Jewish sovereignty over the Islamic holy place. It violated agreements not to change the status quo and cast doubt on an assertion by the Israeli prime minister's office that the status quo at Al-Aqsa would not change.

The rebellious parliamentarian walked barefoot in the courtyard of the Haram al-Sharif, an act meant to pay reverence to the area that what Jews believe was once the site of the Jewish temple. In 2013, an Israeli court barred Feiglin from ascending to the mosque area for fear that his uncoordinated visit might spark protests. Feiglin is so controversial that the United Kingdom refused him entry in 2008.

That Feiglin would go to the Haram al-Sharif was known for days and required a large contingent of Israeli police. The visit proceeded after Palestinian men and women worshipers under the age of 40 were barred from the area and all except one of the gates to Islam’s third-holiest mosque were closed.

While insisting that all Jews have a right to visit what they call the Temple Mount, Israeli security officials have in the past refused such provocative visits, citing the potential for violent opposition and thus denying access for security reasons. In recent months, and under pressure from the right-wing Israeli government, including Feiglin himself, Israeli security has changed its position. Instead of banning such visits, it has undertaken unprecedented actions to bar Palestinian Muslims from their own mosque hours before them. Protests from Jordanian Islamic waqf officials, who are entrusted as guardians of the mosque, have fallen on deaf ears.

Each week, Israeli actions become more and more provocative. The visits are longer, and the ban on Jewish prayers at the mosque compound are increasingly ignored. What began with Jewish visitors inaudibly mumbling a few words is becoming louder and louder. Most Jewish intruders wear prayer clothes, often under their regular clothes, which points to their intention of holding prayers inside the mosque compound.

The peace treaty Jordan signed with Israel contains provisions on the protection of holy sites in Jerusalem. Jordan has confronted Israeli Prime Minister Benjamin Netanyahu about the visits, but was told that no change had occurred to the status quo, in place since 1967. Jordan also signed an agreement with the Palestinian government regarding Jerusalem.

Islamic officials have been screaming and shouting in opposition, but getting little response from the Arab and Islamic worlds, which are engulfed by their own problems. Azzam Khatib, director of the waqf in Jerusalem, told Al-Monitor that the Israeli government has frankly “explained to Jordan that no decision will apply to Al-Aqsa Mosque and that the status quo established since 1967 will remain respected.” He still called on the Arab and Islamic nations to “seriously support Jordan to protect these sanctuaries.”

The chief rabbis of Israel have ruled since 1967, and it has been reconfirmed over the years by additional rabbis, that Jews are not allowed to set foot on the mosque compound for fear that they might desecrate the remains of the temple destroyed in 70 AD. This religious ruling still stands, and a sign stating it meets all who enter the area from the Mughrabi Gate. New Jewish scholarship, however, argues that there are areas that are safe to trespass as they cannot possibly hold any remnants of the temple beneath them.

The practice at Hebron’s Ibrahimi Mosque has been to divide the mosque compound between Jewish and Muslim worshipers, based on the time and the space. Jewish extremists are trying to divide the compound of Al-Aqsa Mosque according to time, with visits regularly scheduled for the morning to roughly coincide with the hours between Islamic morning and noon prayers.

Extreme nationalism has generally guided political life in Israel for years. At the same time, religious fundamentalism grew following the 1967 war and the establishment of the settlement movement in Hebron, followed by other locations in the West Bank. Today, at a time that the United States is leading a global campaign against Islamic extremists, in Iraq and Syria, a dangerous Jewish religious radicalism is allowed to flourish and is provided police protection by the State of Israel.

The current nationalist-religious fusion has been created with leaders like Feiglin gaining critical positions in the Israeli Knesset and government. Netanyahu is constantly worried about the threat to his own position from this extreme right, which dominates his own Likud Party. Religious-nationalist extremism, if allowed to continue, will have the same destructive consequences that other similar extremism has had in the region. Allowing it to change the status quo at Islam’s third-holiest place will most certainly lead to the eruption of a religious war in the Middle East.