Israel has taken measures to limit the number of Palestinian worshippers at Al-Aqsa Mosque so that Jewish visitors can pray there, but the steps seem to be increasing rather than soothing tensions. 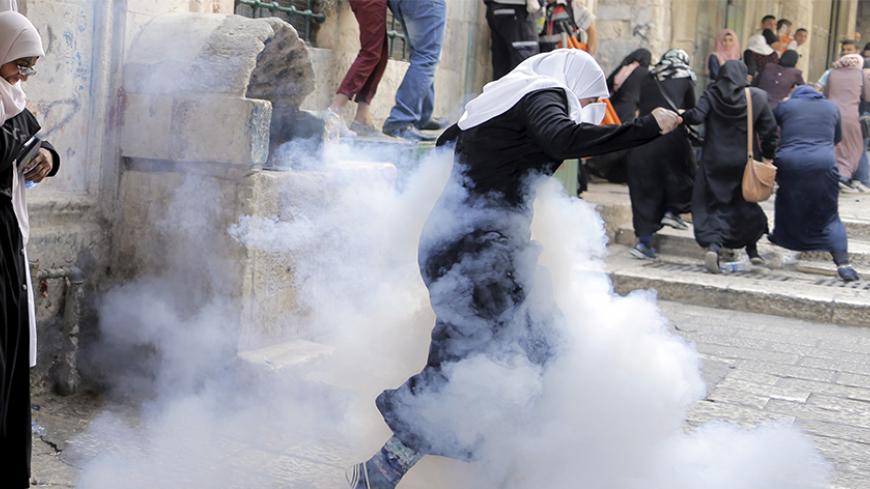 The recent violence that erupted at Al-Aqsa Mosque came as no surprise. On Sept. 9, Israel banned two groups of Palestinian Muslims who call themselves the masculine and feminine variants of “Mourabitoun” as illegal organizations. The problem is that in Islamic terminology, every Muslim in Jerusalem who attends prayers at Islam’s third-holiest mosque is a "mourabit," a term that refers to people holding the fort.

The condemnation was the equivalent of calling all believers worshipping at St. Peter’s Church part of a criminal organization. The head of the Waqf Department (for religious endowments) in Jerusalem, Azzam Khatib, said in a Sept. 9 press statement that every Muslim who enters Al-Aqsa Mosque is considered a mourabit.

Israel’s security apparatus followed the announcement, made three days before the Jewish New Year, with the renewal of its dilution policy. This policy was explained in detail in a June 30 report by the International Crisis Group (ICG) titled “The status of the status quo at Jerusalem’s holy esplanade.” Dilution aims to keep the Palestinian worshippers to a bare minimum whenever Jewish visitors are planning on setting foot in the mosque area. During morning hours until 11 a.m., when non-Muslim visitors are allowed, Palestinian Muslim women are not allowed entry into the entire mosque area, while men are allowed to enter only between 10 and 11 a.m. The entire mosque area is gated and controlled by Israeli police along with token unarmed guards employed by the Jordanian Ministry of Endowments.

The Israeli policy seems to be an attempt to empty the mosque area — which makes up about a sixth of the Old City of Jerusalem — as much as possible to facilitate visits by Jews to the Haram al-Sharif, which Israelis call the Temple Mount.

The women who call themselves mourabitat have been holding religious study sessions in the mosque’s yard, where during certain hours Jewish visitors are given special access to the mosque’s open area by the Israeli security. The women suspend their studies when Jews enter the mosque esplanades and watch them closely for violations of an understanding that visiting Jews during this period are not allowed to pray in the area that Jews call Temple Mount. The mourabitat have become a thorn in the side of the Israeli authorities, who hope to get the visits over with as little trouble as possible. The bottom line to which both Israel and Jordan publicly agree is that the visitors are not allowed to conduct Jewish prayers while in the mosque area. Any hint of prayer and the women start shouting. The women's success, widely covered by the media and the topic of an Al Jazeera documentary, has forced Israel to take this extreme measure.

Khadejeh Khweis, one of the leaders of the mourabitat, has been issued a two-month restraining order barring her entry into the mosque area. In an interview with Al-Monitor, Khweis noted that 52 women have been barred entry. She complained that while the mourabitat are not organized in the technical and legal sense, they are being treated as if they are a tightly knit cell. “We are not an organized movement or party that you can bar or declare illegal,” she said. Khweis also complained that Israeli security uses a lot of force. “They used excessive force Monday and Tuesday inside and outside the mosque area, hoping they can quell the anger of Palestinians,” she told Al-Monitor.

For Palestinians familiar with the thinking of the Israeli authorities, the repressive activities before the Jewish New Year were signs that something had been planned. When the Israeli authorities tried to keep the women and youth out of the mosque area, it became clear that they were planning to break the existing status quo, Khweis told Al-Monitor.

On Nov. 6, 2014, Israel’s Prime Minister Benjamin Netanyahu had vowed to Jordan’s King Abdullah and other international officials that the status quo that has existed for decades would be maintained on the Harm al-Sharif. It was this understanding that led to the Feb. 2 return of Jordan’s ambassador to Tel Aviv.

Ofer Zalzberg of the ICG told Al-Monitor that among the areas Netanyahu promised King Abdullah would be respected was the number and nature (no officials) of individuals allowed to visit the mosque. “Religious Jews were allowed to ascend in larger groups than they were allowed since November 2014. Instead of small groups of 5-15 people, the groups that visited the mosque during the Jewish New Year in 2015 celebrations were up to 30 persons.” Zalzberg said this is a huge number if the Jordanian-employed Waqf guards are allowed to carry out their duties that include ensuring that the status quo — which means smaller groups are allowed to visit but not to pray on the Haram al-Sharif — is maintained.

Khweis told Al-Monitor that during the latest visits, Israeli security prevented the Muslim Waqf guards from getting close to the large groups and also prevented any pictures or videos from being taken.

The Israelis also escalated the tensions when they allowed a sitting Cabinet minister, Agriculture Minister Uri Ariel, to visit on Sept. 8. Israel’s Defense Minister Moshe Yalaon said Nov. 6 that visits by Knesset members and Cabinet ministers to the mosque area fuel tensions. The understanding between Netanyahu and King Abdullah also includes not allowing Knesset members and other officials to enter the sensitive mosque area under the guise of a tourist visit. A Waqf official speaking on condition of anonymity told Al-Monitor that there is nothing touristic about the visit of Ariel, from the far-right HaBayit HaYehudi, to the mosque.

Many Muslims saw Ariel’s visit as a step toward the temporal division of the site — Jews on some hours and Muslims on other hours — in the same way that the Ibrahimi Mosque is now divided in time and space between worshiping Jews and Muslims. The ensuing protests and violence spread from the mosque into the Old City and even beyond.

Zalzberg told Al-Monitor that the ICG recommended “that Israel avoid returning to this destructive dilution practice, which feeds a vicious cycle of escalation, and rely instead on cooperation with the Jordanian Waqf and on granting East Jerusalemites a voice in the management of the site.” Zalzberg stated that the research conducted by the ICG over the past years suggests, contrary to many reports from the Arab and Muslim world, the government of Israel is not digging under the mosque. “We found no evidence that Netanyahu is intent on destroying the mosque,” he told Al-Monitor.

After three days of violence surrounding the Jewish New Year (which started at sundown Sept. 13 and ended in the evening of Sept. 15), the situation calmed at the mosque late Tuesday. The next flashpoint will take place in two weeks, during the Jewish holiday of Sukkot. Religious Jews tend to want to ascend to the mosque area on this eight-day holiday, as it is one of the three pilgrimage feasts. This means that there would be more religious Jews wishing to ascend and that for the government it will be more difficult to confront public support for ascension. Zalzberg predicts that in the coming Sukkot, “We are likely to see considerably more violence than during Rosh Hashanah.”