Al-Aqsa Mosque back in the eye of the storm with renewed clashes, arrests

Various minor infractions have once again increased tensions at Al-Aqsa Mosque, where Palestinians complain that restoration work has been disrupted and Israeli visitors have exceeded agreed-upon limits. 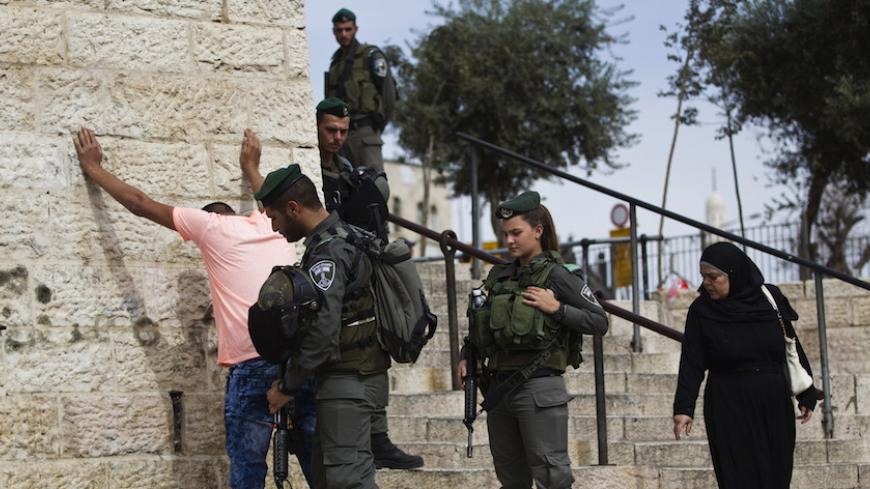 Tensions between Palestinian worshippers and Israelis at Al-Aqsa Mosque have been growing again. Following several incidents, Jordan’s King Abdullah told the Jordanian newspaper Ad-Dustour on Aug. 15, “We will persist in undertaking our religious and historical responsibilities toward Al-Aqsa Mosque/Haram al-Sharif, which faces repeated violations by extremist groups.”

There has been no direct response from the Israeli Prime Ministry, which is directly handling this sensitive issue, to the words “extremists” and “violations.” However, some Israeli government and nongovernment officials did respond to the king’s statement. One of the more negative responses came from a lower-level government official. Zeev Elkin, the Jerusalem Affairs Minister, described the king’s words as “lip service” aimed at appeasing Jordanians. Avi Dichter, the chairman of the Knesset Foreign Affairs and Defense Committee, said Aug. 15, “Israel will not accept [that] Mecca and Medina rules apply on the Temple Mount,” a reference to only Muslims being allowed to visit Mecca.

Egypt’s Al-Azhar also strongly condemned Israeli soldiers' recurrent storming of Al-Aqsa Mosque in Jerusalem. In an official statement issued Aug. 14, Al-Azhar called on the Arab League and the Organization of Islamic Cooperation to take serious measures to stop such "barbaric attacks and flagrant violations" at the complex, which is considered Islam's third-holiest site.

On Aug. 4, Israeli police arrested Palestinian engineer Bassam Halaq along with five other workers when Israel suspended the restoration work they were engaged in at Al-Aqsa. They were released later that day. On July 27, at least one guard with the Jordanian Waqf Ministry, which administers Al-Aqsa Mosque, was arrested after trying to stop a group from walking around the area. The group included Israeli officials from the Ministry of Antiquities.

Also among the group were activists seeking to rebuild the Jewish Temple Mount. They believe the temple's ruins lie on the same site as Al-Aqsa Mosque and that rebuilding it is their religious duty. They have drawn up maps and worked tirelessly to determine how to best replicate what the temple looked like before it was destroyed.

Ofer Zalzberg, a senior analyst at the Middle East and North Africa program of the International Crisis Group, downplayed the recent clashes. In an interview with Al-Monitor, Zalzberg insisted that the November 2014 understanding between Abdullah and Israeli Prime Minister Benjamin Netanyahu is still largely respected. The understanding focuses on permission for Muslims of all ages to visit and pray at the mosque, and it also allows for a limited number of Jews to visit at agreed-upon times without praying.

“These commitments, which preserved relative calm at the site, are still standing. Palestinians of all ages are no longer categorically denied entry and worship in the mosque, Israeli Knesset members and ministers are forbidden entry, the Waqf prevents Palestinian would-be stone-throwers from spending the night at the mosque, and Jews are allowed restricted visiting rights on condition that they just visit and not pray,” Zalzberg said.

Although the general features of the agreement are well-known to all parties, some specifics, such as the exact number of Jews to be allowed to visit, are a source of disagreement.

“After clashes broke out at the site in the fall of 2015, the Israeli police stated that no more than 60 Jewish temple activists will be allowed to enter on any particular day. This quota was quickly and publicly withdrawn, but in effect continued to be implemented, except on Jewish holidays,” Zalzberg said.

Zalzberg conceded that on Aug. 14, on which Tisha B’Av, the day of the Jewish fast in remembrance of the destruction of Jewish temples, fell, Israel apparently exceeded the limit of Jewish visitors. Press reports indicate that as many as 200 Jews were allowed into the compound on Aug. 14. The number of Waqf guards deployed in the mosque area has increased in recent years, Zalzberg noted, which has made monitoring non-Muslim provocative attempts at prayer considerably easier. While 200 guards were added in 2015, the number of Jordanian-paid Waqf guards rose to 500.

Zalzberg explained that the Israeli police had arrested the engineer because the Israeli authorities suddenly changed their minds about an earlier construction permit they had granted to the Waqf, when they learned the Waqf intended to create an opening in the holy site’s ancient external walls. With Al-Aqsa Mosque, every small action can lead to major problems, as permits are often extremely specific.

“They had given the Waqf permission to do construction work to build extra lavatories before Ramadan, but were then worried that the work would harm antiquities at the site,” he explained.

Jerusalem-based reporter Khalil Assali told Al-Monitor there might have been a different reason for the Israeli actions. “Rumors in Al-Aqsa are that the Waqf engineer and workers discovered secret cameras placed by Israel at the location and when they removed them, the police came in to make arrests,” he said.

On Aug. 21, 1969, 47 years ago, an Australian who was said to be deranged set fire to Al-Aqsa Mosque, causing extensive damage and totally gutting the Salahuddin al-Ayyubi minbar, or platform. Local Jerusalemites pitched in to help put out the fire, and the minbar was rebuilt by Jordan’s king in 2007 and has been restored in its proper location.

Despite positive Muslim reactions to Abdullah’s statement, sensitivities continue in and around Al-Aqsa Mosque. Many Palestinians who follow the Israeli media continue to worry that any small provocation could easily ignite the entire region. Many still worry that a religious war provoked by extremists could take place if the situation is not controlled.

Muslims and Arabs around the world cannot rest while various radical groups continue to search for ways to rebuild the Jewish Temple on the location. Still, Palestinians are hopeful they will be able to preserve Islam’s third-holiest mosque.