What is Islamic Jihad's role in the intifada?

The Islamic Jihad movement in Gaza has been organizing rallies and other nonmilitary activities to show solidarity with the intifada in the West Bank and Jerusalem. 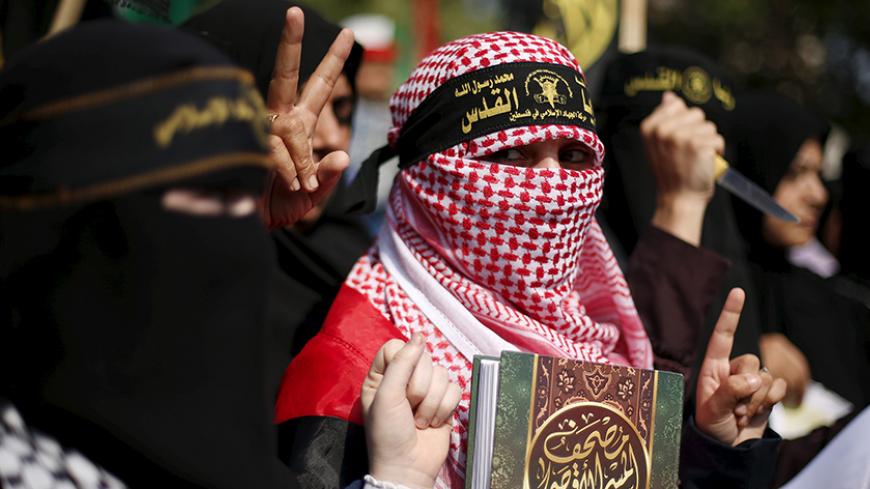 A Palestinian woman supporting the Islamic Jihad movement holds a copy of the Quran as she takes part in a rally in Gaza City to show solidarity with Palestinians confronting Israelis in the West Bank and Jerusalem, Oct. 20, 2015. - REUTERS/Mohammed Salem

GAZA CITY, Gaza Strip — Within the last month, the Islamic Jihad has organized more than nine rallies in the Gaza Strip in support of the intifada that began in early October in East Jerusalem and the West Bank. In the past, the movement had typically organized rallies with other Palestinian factions, such as Hamas and the Popular Front for the Liberation of Palestine. The current rallies organized independently are not part of a military initiative or a border confrontation, but in fact go beyond any demarcation line of Israeli forces in supporting and energizing the intifada from afar. For instance, one rally was called Hebron Martyrs’ Friday, which is also reflective of the group's adopted practice of individually naming marches held every Friday.

Khaled al-Batsh, an Islamic Jihad leader, told Al-Monitor, “There is no confrontation along the occupation lines in the Gaza Strip, unlike in the West Bank, as we do not have checkpoints such as Tulkarm and Tarqumia [where confrontations are taking place]. We consider our movement to be political, not military.”

Movement spokesman Daoud Shihab, sitting in his office in Gaza City, said, “It is wrong to talk about rocket firings from the Gaza Strip now. Let us allow the intifada to run its course, within the framework of popular resistance.” He added, however, “But in principle, we have not ruled out the use of arms, as we are at the heart of a resistance action. Taking up arms will come at the right time.”

Batsh confirmed this perspective, stating, “It is a mistake to believe that Gaza is scared. The resistance is only respecting the current stage and its requirements.” He continued, “In the Islamic Jihad movement, we support this broad form of struggle and intifada in Jerusalem and the West Bank cities. We also support the tools used, including the slings and the stones, the burning of tires and the use of knives. These are forms of mass popular resistance, and we respect and support them as they are playing the required roles.”

Batsh stressed that any altering of the current form of resistance will depend on what practices Israel pursues. For example, in the case of a mass killing, there will be a military response. Batsch remarked, “If we, the people, are asked to change the current form of resistance, then we are ready to do that. But we believe that the intifada is thus far playing its role as it has managed to show Israel’s madness, especially insofar as [Prime Minister Benjamin] Netanyahu's remarks about the Holocaust are concerned. They have sparked international censure.”

Shihab said that, in his view, Israel is trying to get out of the current crisis by resorting to a military escalation against Gaza, but that the Islamic Jihad is keen to deny Israel any excuse to escalate. “The world will see how involvement of the Islamic Jihad’s military capabilities is not limited to rockets,” said Shihab. “If Israel resorts to escalation, then we will be the first to respond to the attacks. In this case, the truce that Israel failed to respect will be truly devoid of any value, but we are so far keen on keeping the intifada within a populist framework. Rockets are a tool of resistance, and the resistance knows when rockets should be used. We, in the Islamic Jihad movement, are not fans of war.”

The recent headlines of Alestqlal, the Islamic Jihad's biweekly newspaper, have focused on the movement's target in a clear and organized show of support for the intifada. For example, a headline on Oct. 15 read, “Jerusalem’s intifada: Resist! Your hands are as powerful as a hurricane!” The same issue included a picture of two young men throwing stones and 12 other headlines for stories analyzing related events. A headline for the Nov. 5 edition read, “The will of the people.”

The Islamic Jihad's message has been both clear and strong in print, on the Internet and on the radio. Its affiliated Al-Quds radio station broadcast more than 33 reports about the intifada within 40 days. These actions complement a set of other political and morale-boosting activities organized by the movement.

Batsh noted, “There are daily events organized by the Islamic Jihad movement. These include marches for the support of the intifada across the districts of the Gaza Strip. Also, we have asked people to only raise the flag of Palestine and to wear the Palestinian scarf. We also organized joint meetings with the Palestinian factions, including Hamas and Fatah, and established a special committee consisting of the national and Islamic factions to follow up on activities aimed at supporting the intifada.”

Both Shihab and Batsh told Al-Monitor that the movement's young people are at the heart of the intifada. It was Muhannad al-Halabi, an Islamic Jihad member, who sparked the intifada with a stabbing and shooting on Oct. 3. Shihab said, “In one night only [Oct. 7], 21 young people from the Islamic Jihad cadres were arrested, including 17 youths from the city of Hebron.” He stressed that the intifada is devoid of factions or parties, with youths from different political affiliations displaying complete unity.

Hassan Abdo, a political analyst with close ties to the Islamic Jihad, said that the movement rejects the militarization of the intifada but is in favor of arming Palestinians. He explained to Al-Monitor that carrying arms is different from militarization, as it creates a more secure environment that prevents settlement expansion and thwarts Israel's complete seizure of the West Bank and Jerusalem.

He stressed that military intervention and rocket firing could weaken the intifada, the main strength of which lies in the West Bank and Jerusalem. It could also lead to an escalation and a potential war in Gaza, which would move the spotlight away from the West Bank.

“The Islamic Jihad movement is heavily represented in the intifada and is organizing several marches. Also, it was youths from the movement who started the stabbing operations, namely, Halabi and Moataz Hijazi. The Islamic Jihad was the only movement that used the word 'intifada' from the very beginning instead of ‘popular uprising,’” Abdo said.