Gazans lament loss of permits to visit Al-Aqsa during Ramadan

Al-Monitor spoke to the members of a group from the Gaza Strip who visited Jerusalem and prayed at Al-Aqsa Mosque on the eve of Ramadan, before the travel permits of hundreds of Gaza residents were suspended following the Tel Aviv attack on June 8. 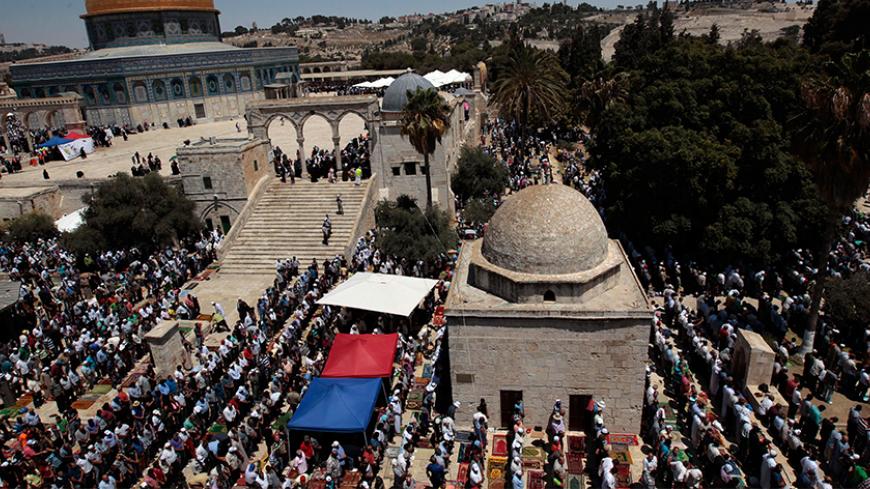 The Dome of the Rock is seen in the background as Palestinians attend Friday prayers during the Muslim holy month of Ramadan on the compound known to Muslims as the Noble Sanctuary in Jerusalem's Old City, Aug. 2, 2013. - REUTERS/Ammar Awad

After the Tel Aviv terror attack June 8, the Israeli military revoked its decision to ease the restrictions on the Palestinians during the month of Ramadan. As per the decision signed by Minister Avigdor Liberman on his first day at the Defense Ministry in Tel Aviv, according to the manager of the Erez border crossing, almost 4,000 Palestinians would be granted travel permits allowing them to exit the Gaza Strip in groups, to visit and pray at Al-Aqsa Mosque.

When word of the cancellation became public, hundreds of Palestinians gathered near the Office of Civil Affairs in Gaza, demanding that the Palestinian Authority (PA) protest Israel's decision to suspend the permits and thereby taking away an important rite during the Muslim holy month of Ramadan.

But such a protest is unlikely to bear any fruits. Following the Tel Aviv attack, the Israeli defense apparatus started reassessing its policies, including granting more travel permits to Palestinians and work permits for West Bank Palestinians wishing to work in Israel.

Only 500 Gazans over the age of 50 made it to Al-Aqsa Mosque on June 3 to pray there on the eve of the start of Ramadan before the travel permits were revoked.

While for some it was the first time they had ever left the Gaza Strip, for the majority it was the first time they left Gaza since the closure was imposed in 2007. Many of those who traveled through the Erez border crossing used to work in Israel and were shocked by all the changes in the country and the differences they observed between themselves and the people of the West Bank.

Al-Monitor spoke to some of the Gazans who had obtained permits to visit Al-Aqsa Mosque, shortly before the checkpoint was closed again. "It was like a furlough from prison," Said Abu al-Jameh from the Sheikh Radwan neighborhood of Gaza City told Al-Monitor. He recounted that the people on the bus felt like they were going from darkness into the light.

“As soon as the roadblock was lifted and the bus started driving across al-Dahel [Palestinian term for Israeli territory], we felt like we were entering another world. The roads are straight, the cars are new, the buildings are new and there is lots of greenery. That was what really caught my eye — lots and lots of green,” he added.

Jameh had worked in Israel until 15 years ago, but when the number of entry permits was reduced because of the second intifada (2000-2005), his permit was invalidated. He was out of work for years as a result. “I used to have lots of friends in Israel,” he said. “I worked in Kiryat Ono, Bnei Brak and even Tel Aviv.”

This time, Jameh and the others did not make it to Tel Aviv. However, they passed Kibbutz Yad Mordechai and the southern cities of Ashkelon and Kiryat Malachi before reaching Jerusalem. Many of the Israeli towns and villages that they passed were within reach of the Qassam rockets fired by Hamas during the 2014 war.

“We were all very excited,” Jameh said. “Most of the people on my bus were very old. They started to cry. When we passed the Yad Mordechai junction, we saw a sign pointing to Sderot. Everyone had heard about Sderot, and we certainly thought about it [the rockets fired at the town during the 2014 Gaza war]. But what we thought about most of all was that we were seeing something new, something different. I used to work in Israel and I saw how much the country had changed. There were so many changes. Israel really developed, while we sunk lower and lower.”

Ahmad Awadallah arrived in the Gaza Strip from Libya with the establishment of the PA in 1994. In the early years, he traveled frequently between the West Bank and Gaza and even had the privilege of praying once at Al-Aqsa Mosque. But this trip was different. Awadallah said that early on during the trip to Jerusalem the people on the bus, who were mostly older, realized they were driving through a place where there are no shortages or suffering, unlike in the Gaza Strip.

“I was worried about their well-being,” he told Al-Monitor. “I couldn’t imagine how they would be able to walk the alleyways of Al-Quds [Jerusalem] on their way to the mosque. But believe it or not, as soon as the door of the bus opened, they regained their strength. They started running like young boys. And the emotions! It is a holy site; the mood there was special. The people from Jerusalem and the West Bank gave us a wonderful reception.”

People from the West Bank and East Jerusalem surrounded the visitors from Gaza during the prayer service. Awadallah said that at first it felt a little strange, but the ice broke quickly. The people from the West Bank were interested in hearing about the situation in Gaza and life under Hamas rule, and they wondered, like many Palestinians, if they would ever reunite with the Gaza Strip.

The Gazans who had for the first time in their lives left home were surprised to discover that there was a vast difference between them and their fellow Palestinians residing in the West Bank. A decade of being cut off from one another, a devastating economic crisis and three bloody wars seem to have created a distinct identity. While Gaza is just an hour’s drive from the West Bank, it is light-years — and dark years — away.

If there was one complaint shared by everyone on the bus, it was that the trip to Jerusalem was too short and that they fulfilled only the commandment to pray during the day, and not at night, at the mass prayer service after the breaking of the fast. “It was very short,” Awadallah said. “We left the Erez border crossing at 5 a.m. and by 2 p.m. we were already back at Erez. You don’t even have time to think about and to understand what you just experienced. On the way back I overheard some people say on the bus that they thought it was just a dream. They fell asleep on the return journey and when they opened their eyes again at the Erez crossing, they weren’t sure the experience was real or a dream.”

Hazem Abu Shaban from the al-Zahara neighborhood in Gaza also said that the biggest problem with this incredible experience was that the visit was too short. He was also surprised to see the difference between life under siege in Gaza and what is happening within a short distance, right across the border: a developed country with wide, open roads and luxury cars. “It’s incredible to think about the difference between how all the people on the bus have been living for years and how you [Israelis] live,” he told this Al-Monitor reporter.

While stuck in a traffic jam at the entrance of the Old City in Jerusalem, the travelers had watched the Israeli drivers in their cars. For many, as they told Al-Monitor, this was their first encounter with Israeli citizens on the other side of the border.

Jameh said that the first thing he had wanted to do was call his friends from the past. “I’m dying to see them, to speak to them, to laugh with them, to drink coffee together, like we used to,” he said.

When Al-Monitor asked him why he hadn't called them, he laughed and said, “We lost touch years ago. Who knows what they remember about me? Maybe they think that I’m not the same person that I used to be, when we were friends, working together.”