Israel has prevented Gazans from traveling to Jerusalem since 2000, but their strong connection with the Holy City is inspiring new campaigns for change. 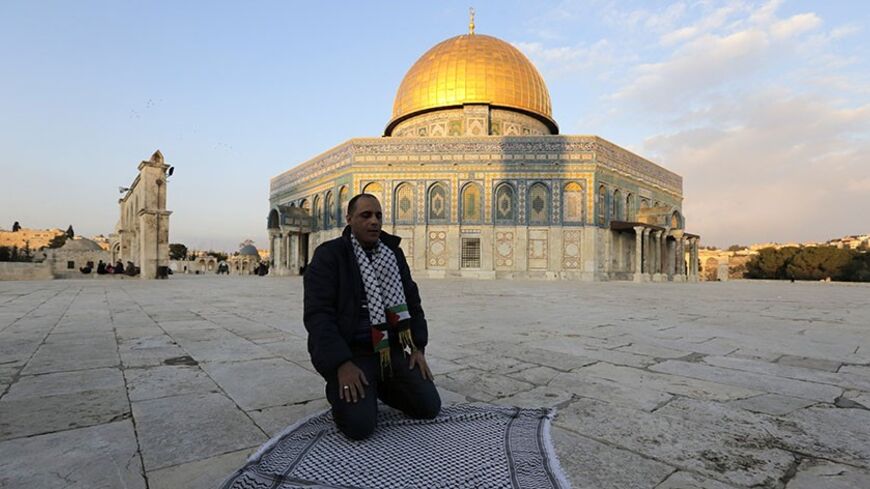 A Palestinian man prays outside Al-Aqsa Mosque in Jerusalem after he was released from an Israeli prison, Dec. 31, 2013. - REUTERS/Ammar Awad

GAZA CITY, Gaza Strip — Um Aref Yusef last saw Al-Aqsa Mosque in 1999, never to be allowed to visit again as a result of the complicated travel restrictions imposed by Israel on Palestinians in the Gaza Strip.

Yusef, 72, looked longingly at a picture of the gilded Dome of the Rock, hanging on a wall in her house in the Nasr neighborhood of Gaza City. “I can still smell the aroma of its old walls. I can never forget the thrill of praying in its midst. The time I spent in that place is a dream that I hope will repeat itself before death takes me away,” she told Al-Monitor.

Israel no longer allows Gaza residents to travel to Jerusalem and hasn't since the second Palestinian intifada in 2000. It also limited passage through the Erez border crossing, which it controls, to a small special category of travelers such as foreigners, senior businessmen and the sick.

Yusef’s constant talk about her last visit to Al-Aqsa has inspired ambition in her grandchildren, who grew up under the Israeli ban against Gazans traveling to Jerusalem. Her granddaughter Samah, 19, told Al-Monitor that she has not seen Jerusalem except on television and through her grandmother’s stories.

Samah is representative of a whole generation that now dreams of going to the city long considered the main cause of the continued Palestinian-Israeli conflict. But the Israeli ban stands in the way of the youths' dream, leading them to devise other means by which to consummate their bond with Jerusalem’s sacred monuments.

Her passion for the Jerusalem shrine drove young Sajeda Abu Ouda, who hails from Khan Yunis in the southern Gaza Strip, to ask one of her friends in Jerusalem to write her name on a piece of paper, take a picture of it in front of the Dome of the Rock and email it to her, though she hopes she can visit the shrine in person sometime soon.

“I could not contain my overwhelming joy when my Jerusalem friend granted my request. I cried and felt as if my feet were actually walking through the mosque’s hallways. I put the picture in an ornate wooden frame and hung it on a wall in my house,” Abu Odeh told Al-Monitor.

“The feeling was extraordinary, as hope seemed to course through my veins. While it is true that my body was never there, through that photograph I felt as if my soul was dancing in the mosque’s courtyards,” she added.

Young Ahmed Zeituneh, who also published a similar photograph of his name on Facebook, elaborated, “As Gazans, we cannot physically go to Jerusalem. By getting our names there, we have proven to the Israeli occupiers that Jerusalem is Arab, Muslim and Palestinian.”

He further explained that the main hurdle standing in the way of his going to Jerusalem was the restrictions imposed by the Israeli occupation. He indicated that the purpose of publishing those pictures was to “affirm all Gazans’ devotion to Al-Aqsa Mosque in the face of Israeli Judaization attempts.”

The idea quickly caught on in the minds of Jerusalem and Gaza residents alike, until campaigns were launched through social networking sites under the slogan of “Today your name, tomorrow yourself.” It quickly became very popular for Gazans' names to be photographed in front of Al-Aqsa to signify their hope that they would be able to pray there in person soon.

Among the Facebook pages dedicated to such campaigns are the “Your name at Aqsa” and “Your name from Aqsa” pages, where readers can see hundreds of pictures of Gazan names in front of Al-Aqsa or the Dome of the Rock, photographed there by Jerusalem volunteers.

Young Gaza resident Salah Khudeir is a moderator of the “Your name at Aqsa” page. He told Al-Monitor that he receives hundreds of requests on a daily basis. He said, “Many Gazans long to see Al-Aqsa Mosque, and their deprivation thereof can be clearly felt. As a result, I fulfill the wishes of hundreds without exception or remuneration.”

“When the campaign started, we received 50 to 100 daily requests. But lately, that number has swelled to over 1,000 requests in a single day. We are therefore looking for Jerusalem volunteers to take the required photos and fulfill the wishes of those Gazans hoping to visit Jerusalem,” he added.

The spread of the Gazan photographs through social networking sites has prompted Palestinian youths in Gaza to demand their right to visit Jerusalem. Many campaigns and sit-ins have been organized in the Gaza Strip under the slogan of “I am a Palestinian from Gaza, and I demand my right to pray in Jerusalem.”

Raid Moussa, one of the campaign organizers, clarified that the aim was to put pressure on all concerned parties to allow Gazans to visit Jerusalem and pray at Al-Aqsa, which, to them, is a dream made difficult to attain by Israeli intransigence.

Speaking to Al-Monitor, Moussa explained that his youth group had collected hundreds of requests from people wishing to visit Jerusalem and took them to the Civil Authority in the Gaza Strip — the administration in charge of managing travel through the Erez crossing — to demand that right.

“Officials there informed us that the Israelis refused to accept such requests, leading us to protest for days in front of the authority’s offices in an unsuccessful bid to regain our rights,” he said.

When asked about the reasons for the Israeli ban on Gazan travel to Jerusalem, Maher Abu Aref, the head of the Civil Authority in the Gaza Strip, refused to comment.

But he did address the issue in an interview with the local Felesteen newspaper in August 2013, when he said, “The issue of allowing citizens to travel through the Erez crossing is not being deliberated. This is a political matter and we, as the Civil Authority, do not interfere in such affairs.”

In the face of the continued Israeli ban on Gazans traveling through the Erez crossing, citizens continue to dream of all these restrictions and hurdles being lifted, allowing them to safely travel to Jerusalem and pray at Al-Aqsa.