Many Palestinians apply, but few get to visit Al-Aqsa for Ramadan 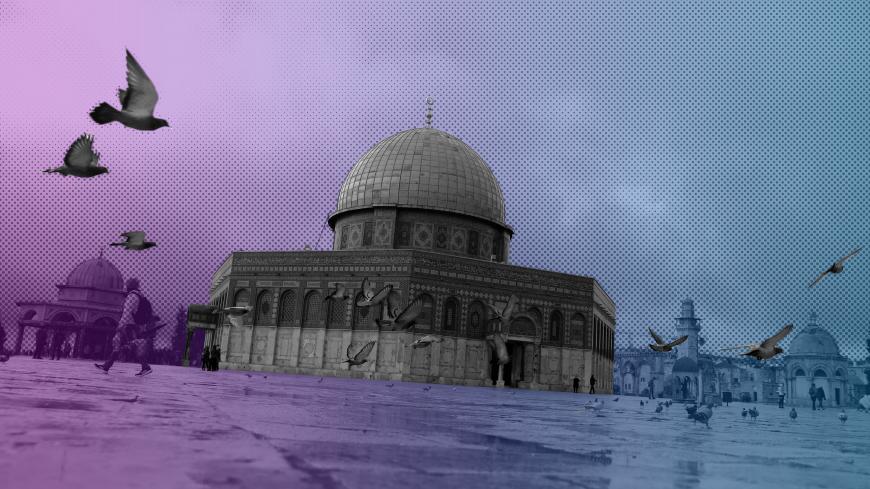 On April 22, Israel announced that 700 Palestinians living in Arab countries would be granted permits to visit Al-Aqsa Mosque during Ramadan.

Suleiman believes this is his last chance to visit Palestine since he left for work in Kuwait in 1965. Israel occupied the West Bank and the Gaza Strip after that. He was not included by the West Bank census that Israel took soon after and was therefore denied a residence permit. “I hope I will be given access to Al-Aqsa one day,” Suleiman told Al-Monitor.

Suleiman is one of hundreds of Palestinians who were displaced from the West Bank in 1967. If he does get the permit, it would only be for one day, and he would not be allowed to travel about in the West Bank to see his brothers or visit his native city of Nablus.

“I just want to make it to Palestine. I can ask my brothers to come to Jerusalem on Friday,” he added.

Ten years ago, Israel started to allow Palestinians in the West Bank to enter Jerusalem to pray at Al-Aqsa during the month of Ramadan. Eligibility is generally determined by age group and depends on Israel's political relationship with the Palestinian Authority.

This year, men who are under 16 and over 40 years old are allowed to visit Al-Aqsa Mosque. Women of all ages are allowed to visit the mosque on Fridays. However, men aged between 30 and 40 need permits to do so, and those 16-29 are ineligible to apply. There were 150,000 openings made available for Palestinians to visit their relatives in Israel from Sunday through Thursday during Ramadan and Eid al-Fitr. Another 700 visitor permits were announced for relatives living in Arab countries to visit Al-Aqsa, and 700 permits for Palestinians to travel abroad through the Ben-Gurion Airport.

These measures only apply to Palestinians in the West Bank.

There are no official criteria for the permits, only conditions for consideration. Applicants go to the Civil Liaison office and may or may not be accepted.

Palestinians eye the measures with suspicion, wary of empty gestures that far below demand for access.

Jihan Awad dismissed the offer as a “lie.” Last year, Awad went from Ramallah to Jerusalem through the Qalandiya checkpoint in the north to celebrate Laylat al-Qadr. As she was on her way back to Ramallah, Israeli soldiers searched the bus she was on and asked her for her permit. She tried but failed to convince them that she had entered legally.

“I was detained until the end of the day and was forced before my release to sign a paper stating that I would never enter Jerusalem illegally,” she said., adding that she also faced delays at the checkpoints leading to Jerusalem.

“On Fridays and on Laylat al-Qadr, hundreds of us women line up under the sun as officials slowly processed us,” she added.

Still, Awad prays at Al-Aqsa every Friday and every Laylat al-Qadr because they are the only days she is allowed in Jerusalem.

Meanwhile, hundreds of young men are are excluded from these easements. Ahmad Ibrahim, a 34-year-old man from the town of Kafr Rai near Jenin, told Al-Monitor, “I have never visited Jerusalem in my life. I have mixed feelings. Jerusalem is only an hour away from my house, but it somehow feels like it is very far.”

He added, “We watch the prayers performed at Al-Aqsa on TV. We imagine the old city's streets based on the descriptions of friends.”

After Israeli announced that men under the age of 40 needed a permit, Ibrahim went to the Palestinian Civil Liaison office and requested a pass. He was not given one.

“They announce the permits, but they don’t always issue them,” he said.

Abdel Hadi Azzam, 46, is from Nablus. Although his age group was included in the easement last year, the Israeli soldier who examined his identity card when he reached the checkpoint stopped him from entering.

“Just because I was once arrested, I am excluded and not allowed to get a permit to pray at Al-Aqsa, which I only entered once in my life at the age of 10,” he told Al-Monitor.

Azzam was released in 2009 after four years of detention over to his activity in the Fatah movement.

Spokesman for the Civil Affairs Ministry Walid Wahdan told Al-Monitor that Palestinians consider access to Al-Aqsa a right. UN Resolution 194 of 1948 stipulates that the holy places, religious buildings and sites in Palestine be protected and free access to them assured in accordance with recognized rights and historical practice.

“The Israeli side has been declaring such measures on religious occasions for 10 years now, but it has now linked them to a set of requirements,” he added.

According to Wahdan, the set of conditions for eligibility can vary. Sometimes applicants must be married, and widowers or divorcees are excluded. Thousands of others are denied permits for security reasons.

With regard to expatriate permits, Wahdan said, “Last year, they said 700 permits would be issued, but only half of them were.”

While some Palestinians wait for this chance every year, thousands are saddened when they find themselves unable to enter Al-Aqsa Mosque during the holy month of Ramadan.