The Israeli justice system appears to have a double standard on collective punishment for the families of Arabs who commit acts of terror and those of Jews who do the same. 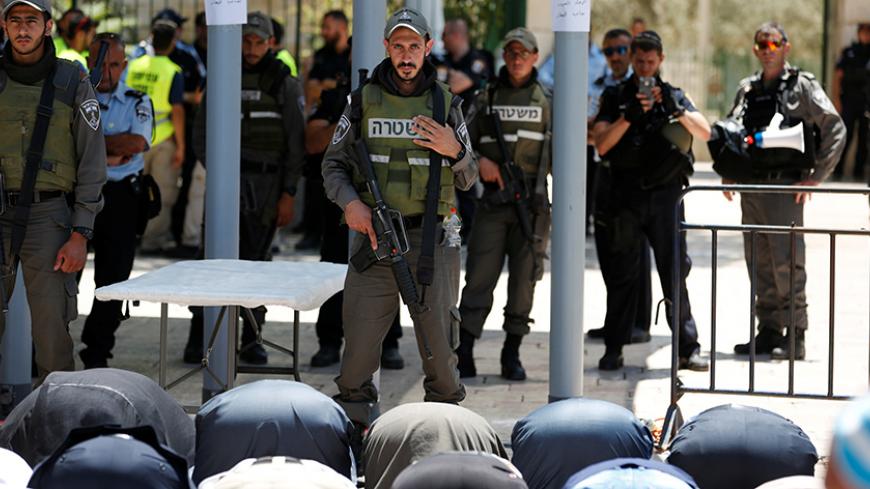 Palestinians pray as Israeli police officers look on while standing by newly installed metal detectors at an entrance to the compound Muslims call the Noble Sanctuary and the Jews the Temple Mount, in Jerusalem's Old City, July 16, 2017. - REUTERS/Ronen Zvulun

In June, Israel marked a half-century since the liberation, in the 1967 Six-Day War, of the Jewish people’s holiest site, the Temple Mount, or of the conquest of the Haram al-Sharif, one of Islam’s holiest sites, depending on one’s point of view. Echoes of jubilant Israeli celebrations had barely died down when the sound of shooting reverberated on the site. On July 14, three Israeli Arabs shot and killed two Israel Border Police officers at the entrance of the Temple Mount compound.

In fact, this flashpoint has been luring various kinds of zealots since Israel captured it in June 1967. In 1969, a messianic Christian set fire to Al-Aqsa Mosque, damaging the pulpit. In the 1980s, Israeli security forces thwarted a plot by the so-called Jewish Underground to blow up al-Aqsa and the nearby Dome of the Rock. In 1982, a Jewish soldier opened fire on the Temple Mount plaza, murdering a Muslim guard and injuring Israeli soldiers, and broke into the Dome of the Rock and fired in every direction. In 1990, Israeli police killed 17 Palestinians during rioting at the compound. Israeli soldiers killed seven Palestinians, four of them on the Temple Mount, in riots that broke out following a visit to the site by Likud leader Ariel Sharon in October 2000.

As noted, in this latest flare-up on the Temple Mount, the attackers were three Israelis, residents of the Arab town of Umm al-Fahm. Their victims were two Israeli Border Guard officers from the Druze community. Prime Minister Benjamin Netanyahu was forced to deviate from his habit of blaming terror attacks on the Palestinian Authority and demanding that Palestinian President Mahmoud Abbas put a stop to anti-Israel incitement. Instead, he was quick to call Abbas and promise that he would not violate the fragile status quo at the sacred site and had only ordered its closure for a short time until calm could be restored.

A pledge to adhere to arrangements is seemingly reassuring news. In fact, the Israeli reaction to the latest attack, as well as to previous incidents of violence at the site, epitomizes Israel’s control of the Temple Mount and underscores the limited authority there of its Muslim custodian, the Waqf. Israel is the sole arbiter of when and whether to close the gates to the compound, and when and whether to re-open them. A state considered by the world as an illegal occupier of East Jerusalem is the one that decides to install metal detectors at the gates. It alone chooses which Muslims to let through and which will have to make do with viewing the Dome of the Rock on a color poster in their living room.

The status quo for Jerusalem and the other territories Israel occupies is Netanyahu’s favorite state of affairs. The ongoing stalemate in negotiations with the Palestinians ensures him against domestic political upheavals and allows him to wander through world capitals on red carpets, pulpits from which to warn against anti-Semitism and express solidarity with embattled Diaspora Jews.

The latest assault on the Temple Mount, like others carried out by Israeli Arabs who identify themselves as Palestinians, illustrates that as long as West Bank Palestinians are under occupation, their Israeli Arab brothers will also be dealing with the issues of dual identity and dilemmas of loyalty. Instead of embracing these Israelis, the Israeli regime is pushing them into the arms of their brothers across the Green line in the occupied territories.

The police were dispatched on July 15 to take down mourning tents erected by the families of the three attackers from Umm al-Fahm, a sanction usually reserved for residents of the territories and East Jerusalem. Israeli authorities have never prevented the families of Jewish terrorists from observing Jewish mourning rites, such as Shiva, seven days of mourning. It was only due to the intervention of Knesset member Ran Cohen of left-wing Meretz that the local council of the settlement town of Kiryat Arba was forced in 1999 to take down a memorial to Baruch Goldstein, a settler who murdered 20 Muslim worshipers in the Tomb of the Patriarchs in Hebron in 1994.

Public Security Minister Gilad Erdan was not content with only demolishing the mourning canopies. He even suggested razing the homes of the three men from Umm al-Fahm, an Israeli town, just as Israel does the homes of Palestinian terrorists in the occupied territories. Coincidentally, 10 days earlier, the Supreme Court had rejected an appeal by the parents of Mohammed Abu Khdeir demanding that Israel demolish the homes of the Israeli Jews convicted of burning their son alive in July 2014. The state opposed the demolition, arguing that the extent of Jewish terrorism was relatively limited and that whereas Palestinian society extolls terrorists, Israeli society denounces them.

The head of the judicial panel, Justice Elyakim Rubinstein, formerly a deputy to the chief justice, made no secret of his view of this overriding, racist distinction. “What does being a Jew or being an Arab have to do with anything?” he wrote. The crucial consideration in deciding whether to damage the property of an assailant’s family lies in the question of whether it constitutes a deterrent. “Saving a life, if only of one person, justifies the demolition or sealing of the home of a Jewish terrorist,” Rubinstein wrote. He nonetheless rejected the petition on the bizarre ground that the long time lapse since the murder had removed the deterrence potential of any demolition. Attorney Mohammed Jabara, representing the Abu Khdeir family, told Al-Monitor that the family was very disappointed with the ruling and was considering an appeal to international courts.

There is no knowing whether razing the houses of Abu Khdeir’s killers would have deterred the next Jewish terrorist. The fact is that a military commission appointed by former Israel Defense Forces (IDF) Chief of Staff Moshe Ya’alon determined in 2005 that the hatred generated by house demolitions is stronger than their deterrent effect. An internal IDF study published two years before that did not find any evidence that demolitions had a deterrent effect. In fact, Maj. Gen. (Res.) Yitzhak Eytan, the former commander of the West Bank, surmised that demolishing the homes of Palestinian terrorists constitutes an incentive for revenge killings. One such example is the attack in the central Tel Aviv Sarona Market complex in June 2016 that took the lives of four Israelis. One of the terrorists, Khaled Mahamra, was 8 years old when he witnessed an IDF bulldozer razing his family's home in the West Bank village of Yatta.

Israel has been trying to manage its conflict with the Palestinians for 50 years, using house demolitions, collaborators, administrative detention (incarcerations without trial), roadblocks and shootings of unarmed civilians. The delusion of a status quo and the semblance of diplomatic negotiations serve their purpose. The latest attack is a warning that absent a fair arrangement with the Palestinians, the Temple Mount could erupt overnight, and its red-hot spewing lava will not stop at Umm al-Fahm.