Residents of Umm al-Fahm, an Israeli-Arab town that was home to the three perpetrators of Friday's Temple Mount attack, claim that ever since Islamic Movement’s northern branch leader Sheikh Raed Salah was elected mayor, the town has been turning extremely religious. 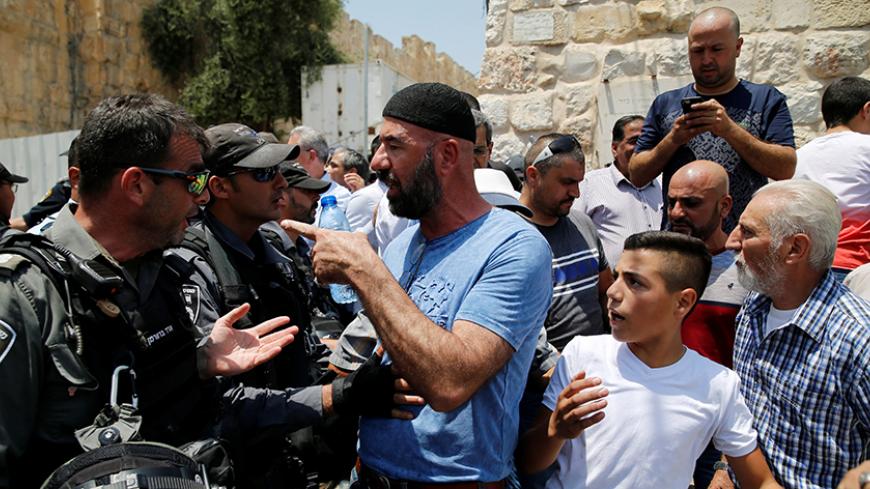 A Palestinian argues with an Israeli border police officer during scuffles that erupted after Palestinians held prayers just outside Jerusalem's Old City in protest over the installation of metal detectors placed at an entrance to the Old City's compound known to Muslims as Noble Sanctuary and to Jews as Temple Mount, July 17, 2017. - REUTERS/Ammar Awad

The three terrorists from Umm al-Fahm who launched the attack on the Temple Mount on July 14 were not the first terrorists to emerge from the Israeli Arab community. On Jan. 1, 2016, Neshat Melhem, a resident of Arara (in the north of Israel), carried out an attack in Tel Aviv that left two Israelis dead and seven wounded; he also killed a third person as he tried to escape. Melhem's father claimed that his son was unstable.

There was also the October 2015 shooting attack in Beersheba by Muhanad Alukabi, a Bedouin resident of the town of Hura in the Negev. A relative described his actions as a moment of temporary insanity. That attack left an Israel Defense Forces soldier dead. An Eritrean guest worker who happened to be in the area was also killed in the incident when he was lynched by passersby who confused him for the attacker.

In contrast, the recent attack on the Temple Mount was committed by three armed terrorists after careful planning. In their case, no one in Umm al-Fahm claimed they acted out of some momentary impulse or that they are not mentally responsible for what they did. The three men — Muhammad Ahmed Jabarin (29), Muhammad Hamid Jabarin (19) and Muhammad Ahmed Mufdal Jabarin (19) — belong to one of the largest families in the city. They launched their attack out of religious zealotry, fomented by the steady flow of incitement in the largest Arab city in the Triangle. Sheikh Raed Salah, the leader of the northern branch of the Islamic Movement in Israel, is directly involved in the incitement.

After the attack, residents of Umm al-Fahm who are not supporters of Salah were afraid to speak to Al-Monitor. "There is a sense of terror here toward anyone who speaks critically of the Islamic Movement," said A., a father of five who lives in the city and spoke on condition of anonymity. He claimed that Umm al-Fahm became very religious after Salah was elected mayor in 1989, defeating Hashem Mahmid of the radical left-wing Hadash Party. Until then, many residents of the Arab city were considered to be supporters of Hadash, with its socialist and communist messages. The fall of the Soviet Union in 1991 accelerated the replacement of communist ideology with religious Islamism.

With the signing of the 1993 Oslo Accord, Israel's Islamic Movement split into two factions: The southern faction supported the peace agreement with the Palestinians, while the northern faction headed by Salah considered itself to be an integral part of the Muslim Brotherhood and also of the Hamas movement, which violently opposed to the agreements signed between Israel and the PLO.

When Salah served as mayor up until 2001, most of Umm al-Fahm's cultural institutions were shut down because the municipality suspected them of disseminating anti-religious messages. One of the cultural institutions shut down by municipal order was the Diwan al-Joun Theater, which was founded by actor Ghassan Abbas and put on plays critical of the Arab leadership worldwide and of changes in the overall approach to Islam. Up until its closure, theatergoers suffered serious threats and even boycotts.

Over the years, the northern branch of the Islamic Movement has become the strongest faction in Umm al-Fahm. All the town's residents, including those who describe themselves as secular, are forced to live in a religious environment imposed by the city's leadership.

Many new mosques have been erected in Umm al-Fahm over the past two decades. Al-Farouk Mosque in the Jabarin neighborhood was where the three attackers — all members of the Jabarin family — prayed. Apparently, it was there that they absorbed the jihadi messages of the northern branch of the Islamic Movement and the calls of its leader — Salah — to defend Al-Aqsa Mosque.

Salah and activists of the Islamic Movement’s northern branch were the ones to organize the Mourabitoun and Mourabitat groups of men and women at the Temple Mount compound. These groups consider themselves to be "guardians of the Al-Aqsa Mosque," shouting "Allahu Akbar" each time they detect a Jew ascending Temple Mount. This activity by Salah generated political and religious competition and tension between his movement and the Waqf (guardians of Muslim holy sites), who are appointed to their posts by the Jordanians.

Umm al-Fahm is home to four main clans, with each clan generally concentrated in a particular neighborhood. The Jabarin clan consists of approximately 20,000 people. One of its members (though not a close relative of the men behind the recent attack) is Knesset member Yousef Jabareen of the Hadash Party. He was evasive when asked if he would speak with Al-Monitor but finally agreed to provide a written response to the attack. He claimed, "Ever since the establishment of the state, the Arab population of Israel has adopted the path of political struggle based on civil, nonviolent means. We oppose any use of arms and the incorporation of violence in our struggle."

One resident of Umm al-Fahm, Khaled Fa'ur, did agree to speak openly to Al-Monitor. He said, "I'm not afraid to speak. I want to stress to every Israeli that these three men and the messages of hate that they picked up have caused indescribable damage to the city. Many of the residents are hurting and ashamed."

He said that the northern branch of the Islamic Movement has not been operating openly in the mosques ever since it was outlawed in November 2015, "but it is not at all impossible that it still operates quietly. The fact is that three members of the Jabarin family were radicalized in a way that the other residents of the town, including some very religious people, never imagined could happen. We did not see any indication that this could happen. This isn't the religion we were raised in. This is something very different and foreign to us. We were not familiar with it. We didn't even know that it existed."

He said that while a religious struggle over Al-Aqsa Mosque is taking place "coming from the Jewish settlers, extremist politicians from both sides are abusing and aggravating this struggle. What happened was the tragic consequence of that."

"There's a gloomy mood in the city," said Fa'ur, summing up the conversation. "For many years, but especially since the events of October [in reference to a 2015 violent anti-Israel demonstration in the city], the people of Umm al-Fahm have been trying to change the negative image that is attached to the city. We hoped that one day the Jews who used to come here to visit and shop would return. That was all ruined in a day, and in such a brutal way, too."