Where do Al-Aqsa protests leave the Islamic Movement in Israel?

The Islamic Movement in Israel has tried to keep a low profile in recent weeks after three men connected to its base, Umm al-Fahm, killed two Israeli police officers, sparking deadly protests. 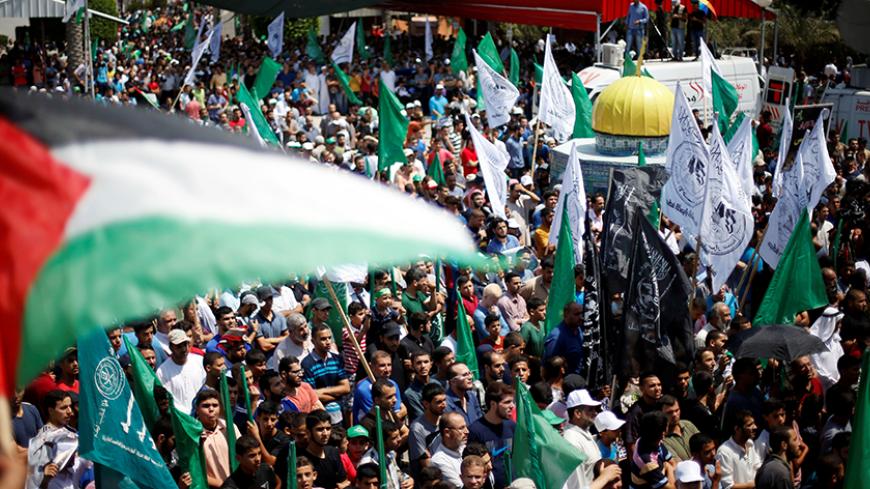 Palestinians in Gaza City, Gaza Strip, take part in a protest on July 21, 2017, against Israeli security measures at the entrance to the Al-Aqsa Mosque compound. - REUTERS/Mohammed Salem

The weekslong protests surrounding Jerusalem’s Al-Aqsa Mosque have affected a variety of players connected with Islam’s third holiest site. The Islamic Movement in Israel has always been engaged, citing the need to protect the mosque. Its leader, Raed Salah, is the movement’s most prominent face and has been a vocal critic of Israeli actions at Al-Aqsa, repeatedly calling on the movement’s supporters to help protect it. As a result, he has been arrested by Israel and banned from Jerusalem on numerous occasions. Salah and his deputy, Kamal al-Khatib, were most recently detained for questioning July 11.

Umm al-Fahm, the Israeli city for which Salah served three times as mayor (in 1989, 1993 and 1997), has been in the news for the past few week as home to the three Palestinians from the Jabarin family who shot two Israeli police officers July 14 on the Haram al-Sharif, where Al-Aqsa sits. Al-Monitor spoke with people familiar with the city and the movement, who said that locals are divided about the three young men.

Mohamad Yazbak, a professor of Palestinian history at Haifa University, told Al-Monitor that the Islamic Movement has kept a “low profile” since the attack to avoid Israeli recrimination. Nevertheless, three Israeli ministers have called for Salah’s arrest.

Yazbak also contends that the events at Al-Aqsa gave prominence to religious leaders at the expense of those in the political arena. “Even Christian Bishop Atallah Hanna, who supported Al-Aqsa protests, also received a lot of credit and visibility. On the other hand, almost all the political leaders were on the periphery.”

The Islamic Movement in Israel has a checkered history in its relations with the Israeli government. The movement split on the eve of the 1996 Israeli Knesset elections over the issue of whether it should participate. In November 2015, the Israeli government outlawed the movement’s northern branch and some 17 organizations and charities connected to it. The Israelis claimed that “a significant body of evidence” linked the branch to Hamas and accused the two groups of engaging in “clandestine cooperation.”

Lawrence Rubin, associate professor at the Sam Nunn School of International Affairs at Georgia Tech, has written about the Islamic Movement and its founder, Sheikh Abdulla Nimr Darwish, who tried to take the organization in a pragmatic direction.

The movement was initially established in 1971, and although it had no official connection to the Muslim Brotherhood, many of its ideologies and philosophies often reflected those of the Brotherhood, which was founded in the Egyptian town of Ismailia in 1928.

Rubin wrote, “The movement split in the mid-1990s when a hardline faction did not accept the majority’s decision to run for national elections in the Israeli parliament. Led by Sheikh Ra'ed Salah, this faction, later called the Northern Branch by others, claimed it would not legitimize the state by participating in an Israeli national institution.”

Professor Nohad Ali, a sociologist, anthropologist and expert on Jewish and Islamic fundamentalism at Western Galilee University, explained the rationale behind the split. Writing on +972, a left-wing Israeli website, Ali said that Salah and his supporters staunchly opposed Darwish’s vision, arguing, “Participating in the Knesset will not advance the movement, but rather paralyze it.” Salah further believed, Ali wrote, “Muslim representatives cannot sit in an Israeli Knesset. It would require them to swear allegiance to a state that defines itself as Jewish.”

Ali also explained that Raed's first electoral victory in Umm al-Fahm, the beginning of the peace process in the early 1990s and the signing of the Oslo Accords led some of the leaders of the Islamic Movement to work on the national level. Ali wrote, “On the eve of the 1992 elections, Sheikh Darwish, leader and founder of the movement, and his supporters, suggested that the movement not remain limited to local elections but also take part in national ones, and support a peace agreement between Israel and the Palestinians.”

While the Islamic Movement has tried to keep a low profile in recent weeks, there is little doubt that the possibility of a confrontation between it and the state of Israel is merely postponed, not eliminated. Few in Israel will forget that the three individuals who killed the two Israeli policemen at the Haram al-Sharif came from the town considered by many as the headquarters of the hard-core Islamic Movement in Israel.

If the troubles and disagreements over Al-Aqsa resurface, there is little doubt the movement will act to support their fellow Palestinians in Jerusalem in defense of a mosque that is holy to the entire Islamic world. If they do not, its members will feel that they have lost their raison d’etre.

Correction: August 9, 2017. An earlier version of this article identified the deputy leader of the Islamic Movement as Kamal Khoury, when in fact he is Kamal al-Khatib.