Will Israel's ban on the Islamic Movement lead to further restrictions?

Some observers fear that the recent ban of the Islamic Movement's northern branch might serve as a precedent for Israel to tighten the noose on its Arab citizens. 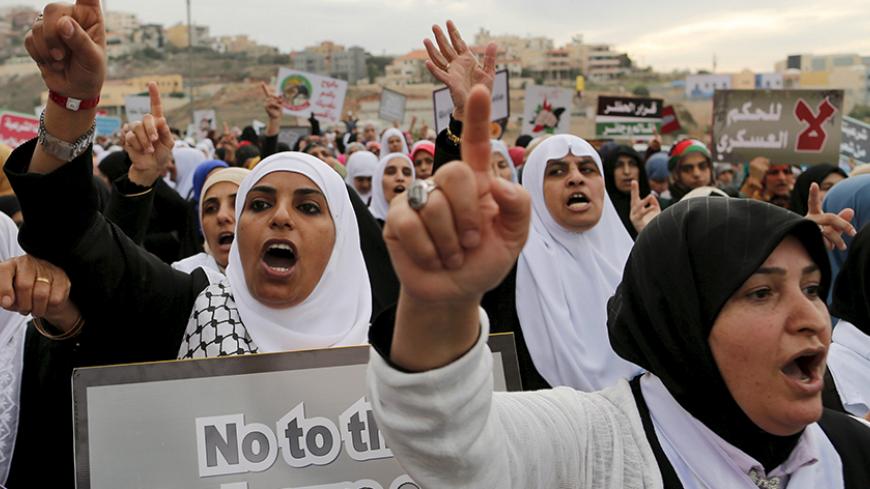 Israeli Arab protesters shout slogans during a demonstration against the outlawing of the Islamic Movement's northern branch, in the northern Israeli-Arab town of Umm al-Fahm, Nov. 28, 2015. - REUTERS/Ammar Awad

EAST JERUSALEM — Supporters of the Islamic Movement's northern branch in Israel are trying to counter the country's recent ban on the group — a ban one former Arab Knesset member called “a preamble for racist resolutions to come."

The High Follow-up Committee for Arab Citizens of Israel has organized acts of solidarity for the Islamic Movement branch. The committee erected a permanent tent of solidarity in the city of Umm al-Fahm on Nov. 18, one day after the ban was issued.

The ban, announced suddenly on Nov. 17, prohibits the movement's activities and stipulates that all of its institutions must be closed.

Prime Minister Benjamin Netanyahu sought to justify the decision by saying, “The northern branch of the Islamic Movement … incites violence against the innocent and is establishing close ties with the Hamas terror group and it undermines the state in order to set up in its place an Islamist caliphate."

Despite complying with the order, the Islamic Movement is convinced the decision is illegal and insists on challenging it through legal and popular means. This was summed up by the statement issued Nov. 17 in Umm al-Fahm by the head of the movement, Sheikh Raed Salah: “The Islamic Movement will continue to exist and convey its message to defend the tenets that it was established for, namely the holy Jerusalem and Al-Aqsa [Mosque], and we will seek to get rid of this blatant injustice through domestic and international legitimate means.”

The northern branch of the Islamic Movement, according to a study published Nov. 21 by the Jerusalem Institute for Israel Studies, was launched in 1996. Back then, it split from the Islamic Movement in Israel over a deep disagreement about the movement’s participation in the Israeli Knesset elections and the scope of its public discourse against Israel.

This new movement adopted a discourse revolving around Al-Aqsa Mosque, parts of the Negev and the Judaization of religious landmarks in historic Palestine. The movement also refused to participate in the Israeli Knesset elections, which led to a series of persecutions by the Israeli government, the most recent example being the ban, according to the same study.

Israel based its decision on the Emergency Law. According to human rights groups — including the Adalah organization and the Association for Civil Rights in Israel, which issued statements opposing the ban — Israel's decision is void. This is the second decision of its kind in the history of the State of Israel, the groups said; Israel banned the Arab political party Al-Ard after the Knesset refused to let it participate in the elections in 1965, during military rule.

Legal adviser Zaid Ayoubi told Al-Monitor the decision is contrary to all Israeli laws, including the Emergency Law. According to Ayoubi, the Emergency Law does not grant the government the right to ban a party, a movement or a group of citizens seeking to express themselves. This is especially true when citizens are using peaceful means without posing any threat to security and public order.

"Using the Emergency Law as a basis for this decision is void," he said. He cited Article 19 of the International Covenant on Civil and Political Rights of 1966, which stipulates citizens have the right to express themselves through political and legal means. “This decision is political and its content reflects the arrogant and racist Israeli language through which Netanyahu and his government try to fight and eradicate any Arab or Muslim presence in Israel.”

On how to confront the decision, Ayoubi said, “The Islamic Movement can face the decision legally by filing a lawsuit to the Israeli Supreme Court and through international and human rights organizations, and even the UN-affiliated International Council for Human Rights, which monitors the government’s infringements on the rights of citizens. The ban on the Islamic Movement falls under this context.”

“Legal teams are now considering the possibility of suing Israel for this decision. But discussions are ongoing about the feasibility of such a step, since there is only a small possibility of getting a resolution to cancel the decision,” he said.

Khatib told Al-Monitor that events such as protests and sit-ins could have a greater impact: “Arabs and Palestinians in Israel have been carrying out popular activities and taking political positions in coordination with the High Follow-Up Committee for Arab Citizens of Israel, which held a series of activities including strikes and marches in the Palestinian villages, as well as festivals and demonstrations."

He noted that if Israel had clear evidence against the movement, it would not have based the ban on the Emergency Law. Khatib said the decision was a political one. He said it seeks to punish the Islamic Movement for its role in the controversy over the rights Palestinians and Israelis claim regarding Al-Aqsa Mosque.

Since it formed in 1996, the northern branch of the Islamic Movement has organized a number of events to promote the cause of Al-Aqsa Mosque. It organized bus transportation for worshipers from the Palestinian territories and provided security guards through its affiliated institutions, specifically Al-Aqsa Foundation for Endowments and Heritage, al-Bayareq Foundation and Heraa Foundation for the Memorization of the Holy Quran in Al-Aqsa Mosque. Moreover, it was northern branch members who uncovered Israel's archaeological excavations under the mosque.

Some observers fear the Israeli ban is a message to the movement and all Palestinian parties in Israel to stay out of the Al-Aqsa issue.

According to former Arab Knesset member Mohammad Barakeh, Palestinians living in Israel fear the ban could become a legal precedent that Israel could exploit to restrict other Arab organizations.

He told Al-Monitor the ban is “a preamble for racist resolutions to come."

“This decision may have repercussions on the Arab parties at home and on the overall life of the Palestinian Arab masses in Israel,” he added.

Barakeh claimed Netanyahu issued the ban even though the Israeli Shin Bet security service opposed the move. He said Netanyahu was trying to appease his supporters and those of the right wing and extreme right wing in Israel in a desperate attempt to cover for his government's failure both internally and externally.