The three Palestinian citizens of Israel who were killed by Israeli police following their attack against Al-Aqsa Mosque that left two Israeli soldiers dead hail from a Muslim-majority town where relatives and the community are trying to preserve the relative calm. 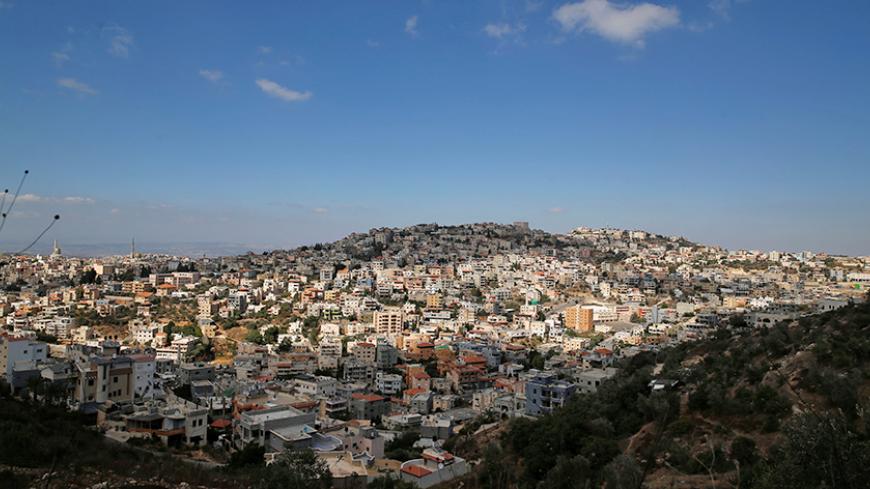 The July 14 attack by three Palestinian citizens of Israel that led to the death of two Israeli soldiers and their own death by the Israeli security has focused attention on two Palestinian towns in Israel.

Umm al-Fahm, a city of 52,000 Palestinian citizens of Israel, lies in the Wadi Ara area. Twenty kilometers (12.5 miles) north of the West Bank city of Jenin, Umm al-Fahm is home to the northern branch of the radical Islamic Movement and its leader and former mayor of the city, Raed Salah. Three cousins who shot the two Israeli border guard police came from this city. Muhammad Ahmed Jabarin, 29, Muhammad Hamid Jabarin, 19, and Muhammad Ahmed Mufdal Jabarin, 19, traveled to Jerusalem’s Al-Aqsa Mosque and carried out the shooting rampage. Shortly after the news of the attack emerged, the city council of Umm al-Fahm met and issued a statement calling on the town’s citizens to remain calm.

Some 40 kilometers west of Umm al-Fahm and in the heart of the Galilee lies the town of Mughar. While Umm al-Fahm is predominantly made up of Palestinian Muslims, Mughar’s 22,000 citizens belong to three faiths: Muslim (20%), Christian (20%) and Druze (60%).

Mughar is home to Israeli Advanced Staff Sgt. Maj. Hayil Satawi, a Druze citizen who was killed in the Jerusalem attack. Satawi, 30, was married with a three-week-old son, Ramos. The other policeman killed is Staff Sgt. Maj. Kamil Shnaan, 22, and hails from the predominantly Druze village of Hurfeish also in the Galilee area.

Media attention was focused on the town of Mughar because it has a mixed religious population and due to the 2005 violent tensions in the city. During the intercommunal strife, youths belonging to the Druze community reportedly roamed the city’s streets, attacking properties and cars belonging to Christians. Druze mobs who were incited by a Facebook post attacked and injured 12 people, two of whom were shot. Cars and homes were also damaged. At the time, according to The Guardian, the violence in Mughar was a reaction to a Facebook entry that included photos of naked schoolgirls that was regarded as affecting the honor of Druze women. The police later arrested a 16-year-old and accused him of being behind the rumor that caused the violence.

Following the attacks in Jerusalem and cognizant of the potential of a recurrence of the internal violence, the religious and political leaders of Mughar met July 17 and issued a joint statement. The leaders called on the local community, especially the youth, to be tolerant and not to fall for rumors; they urged the police to do their job to protect the village from anyone breaking the law.

Adnan Tarabshi, one of the founders of the Palestinian theater company El-Hakawati and a local activist in Mughar, told Al-Monitor that thousands participated in Satawi’s funeral and visited his family. “We had delegations from all over the country, including one headed by former Mayor of Umm al-Fahm Hashem Abd al-Rahman as well as other political and religious leaders.”

Tarabshi said that there is a general consensus the attacks in Jerusalem targeted the occupation forces and were not specifically targeting Druze policemen. However, he noted that many mourners expressed opposition to the location of the attack. “Many of those who paid their respects to the bereaved family said that they felt the holy site of Al-Aqsa Mosque should not be a battle ground and expressed opposition for the choice of the location of the attack as being inappropriate,” he said.

However, Tarabshi said that the Druze mandatory conscription is no longer a major issue. “In terms of numbers, Palestinian Muslim and Christian citizens of Israel are voluntarily joining the Israeli security forces in much larger numbers than the small Druze community,” he added.

Palestinians in the occupied territories have at times complained that the Druze members of the Israeli security are sometimes very brutal in their dealings with Palestinians in occupied areas, while others say that the shared language and culture often help in defusing some of the tensions.

The Druze spiritual leader in Israel, Mowafak Tarif, was quoted in the Israeli media July 17 as condemning the attack at Al-Aqsa Mosque and insisting that the Druze and Muslim communities need to maintain proper relations at this time. Ayman Odeh, the head of the Joint List of predominately Arab parties, called the statement of the Druze leader “a responsible standpoint,” Ynet News reported.

Mohammad Barakeh, a former member of Knesset and the head of the High Follow-Up Committee for Arab citizens of Israel, was the leading local politician to visit Mughar and pay respect to Satawi's family.

On July 18, Barakeh posted a detailed account on his personal Facebook page about the deliberations with the members of the higher committee, saying that a vote of 11-3 approved the visit to the Druze family. Barakeh insisted that the visit was agreed to for social and traditional reasons and to avoid further tensions, insisting that all are in agreement that “the occupation is the main source of all evils.”

A day earlier, Barakeh said in an interview on Musawa Channel, which is funded by the Palestinian government in Ramallah, that he is concerned about the danger of an uptake in incitement against Palestinian citizens of Israel.

He noted that the wise people in Mughar will be able to upkeep their unified relationship, but that there is a need to block any attempts of "fitna," or religious-based mutiny. “This is not a conflict with the Druze community who are part of our people. We are united, we reject any violence or attacks on religious sites,” he said.

The vigilance of the leaders of Mughar proved to be necessary. In the space of three days, on July 15-17, unknown assailants shot at the local mosque twice and threw a stun grenade in the town causing fear among the town’s 20% Muslim population. No one was injured, but the attacks have caused widespread concern that revenge acts might occur in retaliation of the killing of the Druze policemen.

While most attention continues to be focused on Jerusalem and Al-Aqsa Mosque, the relative tranquility and peace that exists among Palestinian citizens of Israel has been shaken up with a total of five Israeli citizens having been killed on the same day, leaving behind families and communities that are trying very hard to pick up the pieces and restore the relative peace that existed within their communities.