For Israeli Arab society, Shireen Abu Akleh, killed last week in Jenin, was not only a well-known journalist but a hero and part of their lives. 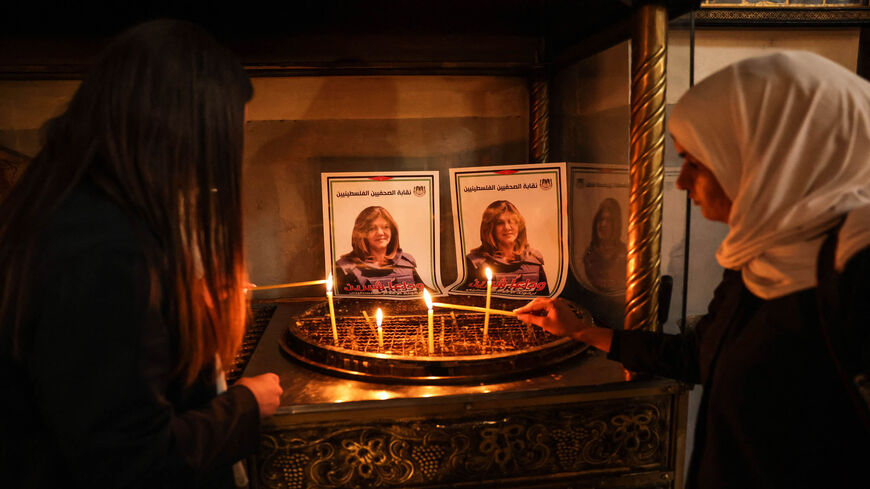 Women light candles in memory of veteran Al Jazeera Palestinian journalist Shireen Abu Akleh, who was shot dead while covering an Israeli army raid in Jenin, at the Church of the Nativity, Bethlehem, West Bank, May 11, 2022. - Hazem Bader/AFP via Getty Images

The funeral of Palestinian journalist Shireen Abu Akleh May 13 turned into a violent confrontation between Israeli security forces and the mourners who came to accompany her coffin on its final journey, from the French Hospital in Jerusalem’s Sheikh Jarrah neighborhood. Images of Israeli police clashing with the participants in the funeral procession reached almost every home globally. No one in Israel and the rest of the world could remain indifferent to the sight of the coffin almost falling.

With that, Israel was subjected to harsh criticism and condemnations for the actions of its police during the procession. It was described on Israeli social media feeds as a devastating blow to Israel’s public opinion campaign and a serious setback to its image. People wondered what possible excuse the police could have for acting the way they did. To make matters worse, all of this was happening before Israel even had a chance to repair its image after the shooting of a journalist, by thoroughly investigating the incident. With the harsh footage still making its way around the world, it now seems as if Israel will not be able to repair its image at all.

As a journalist for Al Jazeera, Abu Akleh achieved prominence in the Arab world — and among Israeli Arabs in particular — in the late 1990s and early 2000s. This was before the rise of social networks, when Al Jazeera was a major news force in Arab society. Abu Akleh became an iconic figure among Israel’s Arab society. When she died, people felt as if they were saying goodbye to someone who was there alongside with them for decades. The violent way in which she was killed caused people to identify even more with her and her family.

This is evident from a statement released by the Islamist Ra’am party May 11, the day of Abu Akleh’s death. It was postponing its press conference, scheduled for that morning in the town of Kafr Qasim. The party was originally expected to announce its decision about whether it would remain in the coalition. The decision to move the press conference — and to focus on the killing of Abu Akleh — to the Knesset that afternoon pointed to the stature Abu Akleh had as a journalist among Arabs of all backgrounds.

In an interview with Al Jazeera, Arab Joint List Knesset member Ahmad Tibi said, “Shireen was shot and killed three times: the first, when she was shot in the head, the second, when it was announced soon after that Palestinians shot her, and the third, when her funeral was attacked in such a barbaric way.”

In an interview with Al Mayadeen television, Chairman of the Joint List Knesset member Ayman Odeh said that there were “three points: The first is that Shireen Abu Akleh united the entire people, when they needed unity; the second that the sight of thousands of men calling out the name of a woman is something for which they can take pride; and the third is that Shireen created a Palestinian presence, with the symbols and flags of the Palestinian people, in the city of Jerusalem.”

Within the coalition, Minister of Regional Cooperation Issawi Freij did not spare any criticism either. He lashed out at the police, saying, “The behavior of the police at the funeral was an ethical blow to the State of Israel, and not just some blow to its public relations. For four days, networks all around the world have focused only on police officers beating the pallbearers at the funeral.”

A delegation from the Israeli town of Umm al-Fahm headed by Mayor Samir Sobhi Mahamed paid a condolence call to the Abu Akleh family. Demonstrations in support of Abu Akleh took place in towns across the country, including Shfaram, Haifa and Nazareth.

One of the young people who took Abu Akleh’s death particularly hard was Yanal Jabarin, a social activist from the town of Umm al-Fahm. He tweeted responses to some of the reports in the Hebrew media, which asked how a successful Christian woman was able to become a hero to the Palestinian people. In a conversation with Al-Monitor, he said, “Shireen was a hero. She was a teacher and a guide for every young person who entered the media and wanted her help, with an emphasis on the distinction between work as a journalist and work in the field. I enjoyed watching her. … She entered every Palestinian home. The love for her was so great that whenever she visited an Arab town, she was received warmly.”

One woman who got to know Abu Akleh from up close is Kholoud Masalha, director of the I’LAM Arab Center for Media Freedom, Development, and Research. She told Al-Monitor, “Shireen was a familiar figure in every Arab home. Everyone would watch her when Al Jazeera was the leading network for the Arab population. … To better understand her status, there were quite a few people who thought that her funeral procession would begin at Al-Aqsa Mosque, showing that the religious component really wasn’t a factor here. Perhaps, without us even realizing it, with her death, Abu Akleh restored the Palestinian issue to the agenda.”