The leader of the extremist northern faction of the Islamic movement, Raed Salah, drew tens of thousands of Muslims to a rally in support of the Egyptian Muslim Brotherhood and against coexistence within Israeli society. 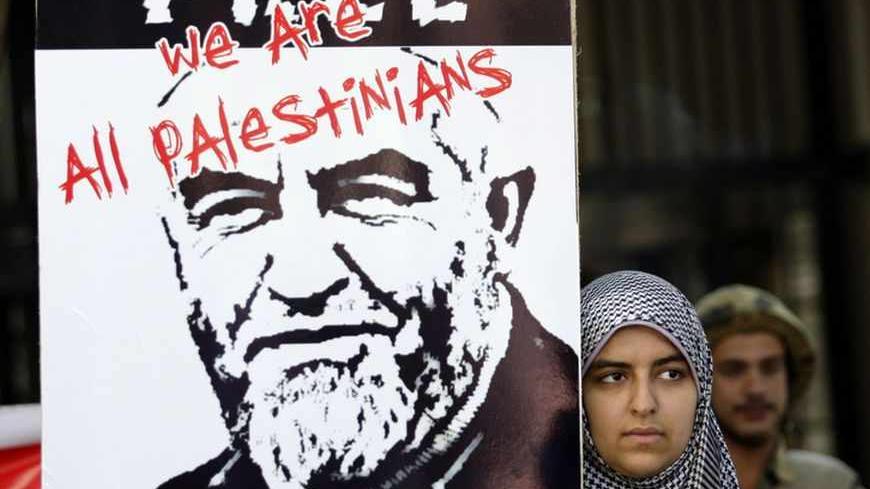 A woman holds a poster of Sheikh Raed Salah in a silent protest held by the Arab Doctors Union outside the British Embassy in Cairo, July 12, 2011. - REUTERS/MOHAMED ABD EL-GHANY

On Friday, Sept. 20, the annual rally of the northern faction of the Islamic movement in Israel was held in Umm al-Fahm, under the banner, “The Al-Aqsa Mosque is in Danger.” But Jerusalem was not at the center of the event — one of the largest organized by the movement in Umm al-Fahm — but rather the ouster of Egyptian President Mohammed Morsi and the Muslim Brotherhood in Egypt.

The northern faction of the Islamic movement in Israel has been led by Sheikh Raed Salah since the 1990s. Salah, whose father served as a policeman in the Israeli police, joined the Islamic movement while it was still unified under the leadership of Abdullah Nimer Darwish, but very soon became the leader of the movement’s extremist line, which opposed the institutions of the state of Israel. With this agenda, he was even elected mayor of Umm al-Fahm (1989-2001). In the eyes of Jewish Israelis, during his term the city seemed hostile, governed and supported by religious fanatics who identify with Hamas.

Raed Salah expressed this identification not just with declarations and statements but with deeds. After the signing of the Oslo Accords between Israel and the PLO (1993), which left Hamas outside the Palestinian political dialogue, he succeeded in gathering enough support to break away and tore the Islamic movement in two, with an extremist northern faction under his leadership, and a more moderate southern faction.

Over the course of years, he’s been arrested, tried and jailed several times, for such charges as collaborating with an enemy agent, after his movement transferred funds to Hamas during the second intifada, at the height of the period when suicide bombers were regularly sent to Israeli territory.

The northern faction, which he still heads today, became extreme not only within the Islamic movement; it also tore apart Umm al-Fahm, the largest Arab Muslim town in Israel. Even today, half of its residents try their best to integrate into Israeli society and perceive the state of Israel, despite the discrimination they experience, as their state; the other half supports an anti-Israel, anti-establishment line, which Salah has espoused for many years now.

The terminology Salah uses in all his speeches and declarations is not different from that used by the leaders of Hamas in Gaza, and is sometimes even more extreme. He’s called the Jews “murderers”; he’s praised suicide bombers and their families; and he’s used the Al-Aqsa Mosque as a symbol to stir rebellion and incite Muslims against the state. He’s even claimed that Israel has secret plans to take over the mosque and destroy it.

If there was once a thin strand of coexistence between Jews and Arabs in Umm al-Fahm, Salah is the man who has persistently broken it. This week, at the annual rally in Umm al-Fahm, Raed Salah, his deputy Sheikh Kamal Khatib and the other leaders of the northern faction could see the fruit of their labors.

Thirty thousand Arab Israelis took part in the rally, and in their participation they expressed support for the extreme views of the northern faction, which, as noted, sees the Israeli establishment as an enemy that must be acted against.

How did Raed Salah succeed in turning Umm al-Fahm into a stronghold of the Islamic movement? How did his movement succeed in bringing out tens of thousands of Arab Israelis to shout angry slogans against the ouster of the Muslim Brotherhood in Egypt and the removal of Mohammed Morsi, and to wave the flags of the district of the Rabia al-Adawiya Mosque in Cairo (where Muslim Brotherhood supporters protested Morsi’s ouster), when such a rally of support has not been organized in any Arab country?

The story of the growth of the northern faction of the Islamic movement is the story of the discrimination against Arab Israelis. The sense of alienation and economic hardship have turned Umm al-Fahm into fertile ground for the flourishing of an extremist Islamic movement, which champions not only the al-Aqsa Mosque but also the fight against the official institutions of the state of Israel. This is exactly what happened in the poor neighborhoods and refugee camps where Hamas and the Muslim Brotherhood found fertile ground for support.

The seeds of the Muslim Brotherhood were sown in Umm al-Fahm in the mid-1990s and flowered during the second intifada, a period that saw cuts in development and infrastructure budgets and cuts in resource allocations to Arab villages and towns.

From Raed Salah’s point of view, Israel’s policy of discrimination is the fertilizer which he so desperately needed for growing, developing and disseminating his anti-Jewish-Israeli messages.

About 50,000 residents live in Umm al-Fahm, most of them members of four large clans. The ideological-religious split, loyalty versus disloyalty to the state of Israel, divides entire families. For instance, it pits sons against their fathers, for being passive even when they were rejected in Israeli society, and their sons seek to reinstate their lost honor; or for example, brothers who live in the same household but are divided in their support – one is for integration into Israeli society despite the difficulties and frustrations and the other supports the Islamic movement.

Many in the city follow the hard line of the Islamic movement led by Raed Salah, but many others, who are still the majority, prefer to be an integral part of Israeli society.

A few months ago, one young man from Umm al-Fahm spoke with me at length with a sharp and clear message.

“I have four children,” he said, “and I teach them to love Israelis, teach them to be a part of the state. This is their place and this is where their future is meant to be. We have no other place to go. So accept us, give us a chance, give us an opportunity to study and to work. But I’ve noticed that you teach your children to hate Arabs, to stay away from Arabs. Why? Try us, I promise you will not be sorry. Don’t give the haters a chance to flourish. Do it now, before even I, with the values I work hard to teach my children, can no longer justify coexistence.”