The real story behind Trump’s meetings with Abbas and Netanyahu 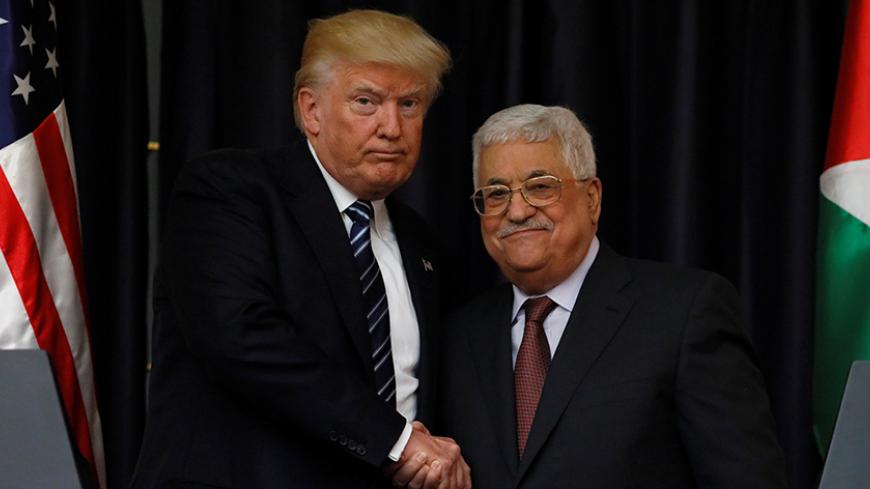 US President Donald Trump and Palestinian President Mahmoud Abbas shake hands as they conclude their remarks after their meeting at the Presidential Palace, Bethlehem, West Bank, May 23, 2017. - REUTERS/Jonathan Ernst

A week has passed since US President Donald Trump's visit to Israel and the West Bank May 22-23, and the euphoria is starting to wear off. According to Channel 2, the conversation between Trump and Palestinian President Mahmoud Abbas that took place in Bethlehem was harsh. The president even burst out shouting at the Palestinian leader, claiming that Abbas had deceived him with statements about his commitment to peace at an earlier meeting between the two men in the White House.

Trump arrived in Bethlehem already charged up after a meeting with Israeli Prime Minister Netanyahu, who had presented material to Trump allegedly proving that the Palestinian Authority (PA) continued to be involved in incitement against Israel and also continues to pay large sums of money to Palestinians, including terrorists, imprisoned in Israel.

According to Al-Monitor’s research, the following details are indeed true: The first part of the Abbas-Trump conversation was tense. It turns out that Netanyahu had shown Trump a section of a video clip in which Abbas says, “I am an inciter.” The Palestinians claim that the president did not raise his voice at Abbas, but do admit that Trump demanded explanations. The Palestinians claimed that the clip shown to the president by the Israelis had been edited and taken out of context. At this point, senior Fatah official Saeb Erekat intervened and told Trump that Netanyahu is the provocateur, that the prime minister never stops inciting against Abbas in order to torpedo any chances for advancing negotiations.

Bethlehem was not the only place where tensions rose. It has now emerged that harsh words were also uttered in the conversation between Netanyahu and Trump. Evidently the American president continued to subject the prime minister to steamroller pressure on the concessions that Israel will have to make and the need to quickly renew negotiations with the Palestinians. Netanyahu, when he appeared before the Likud faction in the Knesset on May 29, hinted at this. He told the Likud members, many of whom oppose negotiations, that Israel does not have a “blank check” with Trump in the diplomatic realm.

At the epicenter of the controversy and public tempest in Israel is the long-term financial support provided by the PA to Palestinians incarcerated in Israel. A discussion, led by Gen. (Res.) Yossi Kuperwasser, had been held May 29 on this subject in the Knesset’s Foreign Affairs and Defense Committee. The data provided by Kuperwasser, former chief of the research division of the Israel Defense Forces' Military Intelligence, aroused much anger. According to his figures, the PA transfers more than a billion shekels (more than $280 million) a year to families of prisoners and to the prisoners themselves. This is a tremendous sum, comprising a significant percentage of the Palestinians' overall budget.

There is an almost across-the-board consensus in Israel on the need to halt these payments, which are perceived as “encouraging terror.” This objective is supported by the right, as well as by many in the political center and even on the left. The fact is that anyone who harms Israelis or turns to terror receives a tremendous salary from the PA during his or her imprisonment, and the families of these prisoners also receive generous payments. Many Israelis feel that this policy encourages the continuation of terror.

“It makes no sense for the state to conduct a diplomatic process with the goal of peace when ongoing incitement continues by the other side that is supposed to be a partner,” said Avi Dichter of Likud in the course of the Knesset discussion. Dichter, former head of Shin Bet, now serves as chairman of the Foreign Affairs and Defense Committee.

The sorry state of affairs, in which a dialogue of the deaf is taking place between Jerusalem and Ramallah with Washington’s desperate mediation, is a type of Middle East Catch-22.

According to official Israeli security data, between 750,000 and 800,000 Palestinians have been arrested and imprisoned by Israel since 1967, when Israel seized and occupied Gaza, the West Bank and East Jerusalem. This is an incredible number, equivalent to a third of the population of Israel.

“You don’t understand,” a high-placed Palestinian told Al-Monitor on the condition of anonymity. “Around a third of our people are familiar with the inside of your prisons. Almost a million human beings have rubbed shoulders with Israeli prison guards over the last 50 years. There is hardly a Palestinian household without a shahid [here in reference to suicide attacker] or prisoner. This is engrained deeply in our genes. No leader has been born that can change this fact.”

Al-Monitor has learned that this issue also came up in the conversation between Abbas and Trump. A Palestinian diplomatic source told Al-Monitor on the condition of anonymity that during the meeting, Trump was told, “There is no Palestinian leader who would not be sacked five minutes after he damaged the status of the prisoners.” He was also told, “This is an impossible demand. The Palestinian people see these prisoners as those who sacrificed and took part in the war against the occupation.”

That is, indeed, the situation. To restart negotiations in a way that has any chance of making progress, Trump’s people will have to square the circle. They will have to mediate between two nations that speak different languages and hold completely different value systems. The Palestinians incarcerated in Israel are viewed by the Israeli majority as despicable murderers who did not hesitate to slaughter innocent women and children. The Palestinians, by contrast, view them as freedom fighters and assign them an almost holy status.

Neither nation will alter its view on this emotionally charged issue. What is needed to somehow resolve this complex situation is a “responsible adult,” someone who will seize the authority to tell the two sides something along these lines: Fate has brought the Palestinian nation and the Israeli nation to the same plot of land. The Palestinians will not change, and evidently the Israelis won’t either. All the useless arguments must be pushed aside and focus must be placed on the core issue — courageous negotiations must be held on the core issues (borders, Jerusalem, refugees). The prisoner problem should only be addressed afterward. Any other mode of action will only perpetuate the bloody conflict that embitters everyone’s lives.

Is Trump the responsible adult who can conduct the mission? Many people might find the label “responsible adult” somewhat amusing when applied to Trump. With regard to everything connected to the negotiations, however, the president has so far revealed acute understanding, vision and execution. His problem is that the sides themselves don’t really want to enter the negotiating room, despite statements to the contrary. Netanyahu is deathly afraid of negotiations, and Abbas knows that he will be obliged to make decisions that no Palestinian leader has made before him. It is doubtful that Trump could pull it off.