Is Trump about to reveal his Mideast peace plan?

The meeting in New York between Palestinian President Mahmoud Abbas and US President Donald Trump revived Palestinian optimism on the US Mideast peace plan. 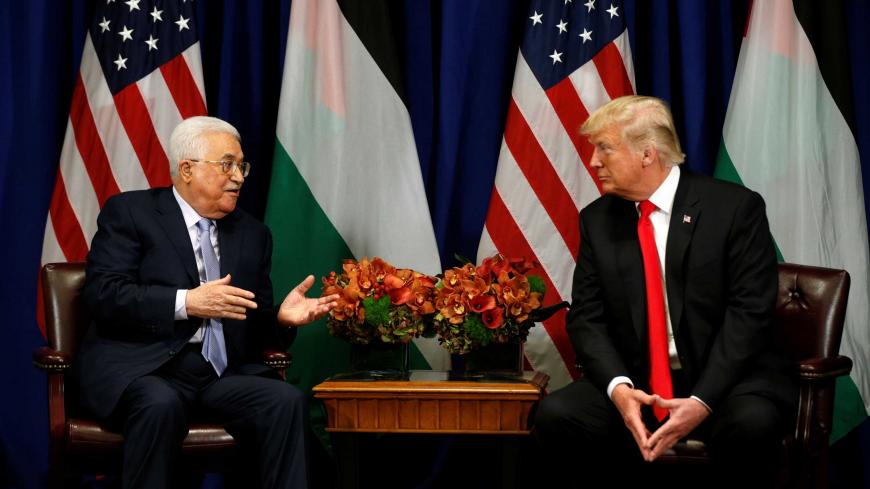 The Palestinians were sure all was lost. All the promises of an American diplomatic initiative on the part of President Donald Trump for a viable solution to the conflict that no one before him had managed to resolve seemed to have gone down the drain. It appeared the dream of a Palestinian state would not come true in the period of Palestinian President Mahmoud Abbas’ term. But something happened on Abbas’ way to New York to address the UN General Assembly on Sept. 20. Trump’s Mideast envoy Jason Greenblatt indicated to him that the president would meet with him during the General Assembly session and might bring a positive message.

Trump’s message and also a private meeting with him shortly before Abbas’ UN address may have changed something in the speech, which was prepared ahead of time. Nonetheless, Abbas still sounded grim. On the other hand, Palestinian sources now express cautious optimism.

As mentioned, the two leaders met just hours before Abbas’ speech. Trump asked the Palestinian leader to be patient a while longer because Greenblatt and senior White House adviser Jared Kushner were putting the final touches on the diplomatic initiative that has been discussed since Trump took office in January. Trump urged Abbas not to make hasty, unilateral moves that would hamper diplomatic progress, such as applying for membership in UN committees, until the American plan could be unveiled.

“It was a good talk, perhaps the best President Abbas has had with Trump,” a top Palestinian source told Al-Monitor on condition of anonymity. According to the source, although the conversation on the sidelines of the General Assembly was short, lasting less than 30 minutes, Abbas was persuaded to give the American channel a chance.

The Americans explained that Trump’s envoys believed setting a deadline for publication of the plan could torpedo the blueprint, which is being drawn up in great secrecy “but calculated with great precision as a complex puzzle in a bid to overcome all the obstacles,” the source said.

Prime Minister Benjamin Netanyahu received a similar message from Trump. At the Sept. 24 session of the foreign affairs and defense Cabinet, Netanyahu briefed ministers on his meeting with Trump in New York last week. According to ministers present at the meeting, as quoted by Haaretz, the president “conveyed his seriousness about this. The Americans are preparing a plan. … Trump is very determined and wants to reach the ultimate deal."

Unlike the positive Palestinian assessment that Trump appears more serious than they had thought, Netanyahu’s comments at the Cabinet meeting conveyed a sense of concern. The Palestinian source believes that when Netanyahu understood that Trump meant business, he convened his ministers to prepare for what he foresees as a diplomatic offensive that must be foiled. Netanyahu’s laconic, matter-of-fact report appeared designed to inform his top ministers to get ready for a diplomatic initiative that Israel’s right-wing government is unlikely to be able to accept and that Netanyahu will likely be unable to oppose.

“Netanyahu surely knows much more than he’s letting on to his ministers,” the Palestinian official told Al-Monitor. He added that most of the details in the plan under preparation are still being concealed from both sides, but the principles are already known and clear to both Abbas and Netanyahu. “That’s why [Netanyahu is] worried,” said the official.

For months, the Palestinians have been trying to extract from Trump’s two envoys a promise that an American blueprint for a resolution of the conflict, or as the president likes to call it, “the ultimate deal,” would be based on the principle they hold sacred of two states for two people. Thus far, the Americans have refused to issue such a declaration, and the Palestinians are still smarting from Trump’s comment at a February news conference with Netanyahu that “I‘m looking at two states and one state, and I like the one both parties like. … I can live with either one.”

“So far there has not been a public declaration [about two states],” the source said. “But we know the American plan will result in Palestinian independence, in a state within the 1967 borders, and that means the Americans understand the importance of this hallowed principle.”

This is probably what set Abbas’ mind at rest and what set Netanyahu’s teeth on edge, according to the assessment of the top official. He believes Netanyahu fully understands that an independent Palestinian state invariably means Israeli withdrawal from the areas of the West Bank it captured in 1967. Right now, the Palestinians and Israelis have no idea what exact territories are involved in the plan. Although the Palestinians were not told so in so many words, the Palestinian official believes that once unveiled, the American plan will not include detailed moves, either, to prevent it from falling through at the outset.

“They intend to go for confidence-building measures,” said the source, adding that this is the first principle reiterated by the Americans at every meeting with the Palestinian brass. The father of the confidence-building approach is Greenblatt, who, according to the Palestinians, is convinced that a positive climate must be fostered between the sides before they can discuss the cost and compromises involved in reaching an agreement. Greenblatt feels the first step must be economic confidence-building measures, to be followed by the crucial diplomatic stage that could take several years.

Netanyahu and his right-wing government tried in the past to promote an “economic peace” with the Palestinian Authority, which would obviously absolve it of commitments to painful territorial compromises. It may even have been Netanyahu who convinced the Americans of the importance of economic peace, but the Palestinians believe the Americans only view it as a first stage to be followed by additional and more-binding moves.

Despite the Palestinians’ cautious optimism, reinforced by the Abbas-Trump conversation in New York, they do not give the “ultimate deal” much of a chance. Abbas and others in the Palestinian leadership have extensive experience with what they dub “the Netanyahu methods” designed to bury any and every initiative. They expect that Netanyahu will not come out immediately against whatever US plan is tabled, but will adopt devious methods to thwart it by foot-dragging and blaming the Palestinians as he always has in the past with every attempt to advance a diplomatic arrangement.