Ahead of the annual UN General Assembly meeting, Palestinian President Mahmoud Abbas is planning a speech that some suspect will denounce Benjamin Netanyahu and anger Donald Trump. 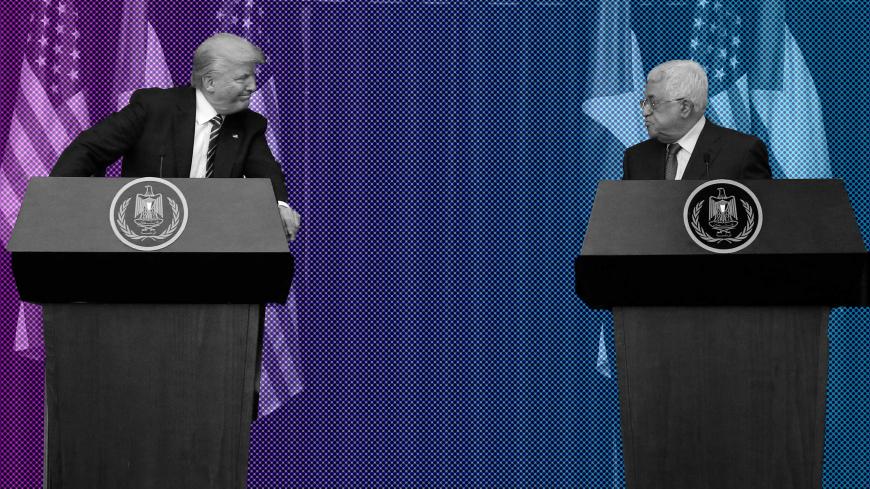 US President Donald Trump (L) and Palestinian President Mahmoud Abbas deliver remarks after their meeting at the presidential palace in Bethlehem, West Bank, May 23, 2017. - REUTERS/Jonathan Ernst

The UN General Assembly will convene on Sept. 19, and the Palestinians have less than two weeks to formulate the tone of President Mahmoud Abbas’ speech, to be delivered Sept. 20. The speech has been piquing interest, not only because it might be the last UN speech of the Palestinian leader, who will be 83 years old next year, but also because of the possibility that he will declare a divorce from US President Donald Trump's administration despite the heavy price such a move appears to entail.

The Palestinians are disappointed in Trump, his special envoy Jason Greenblatt and senior White House adviser Jared Kushner. At times during the last few months, it seemed to the Palestinians that the Americans might surprise them and pressure Prime Minister Benjamin Netanyahu into a diplomatic process, but no longer. “After we talked in circles together, we’ve realized that [good] won’t come from them,” a senior Palestinian official told Al-Monitor on condition of anonymity. “Now the moment of truth has arrived.”

According to the source, the Palestinians discovered from a Sept. 6 Haaretz report that Trump, indeed, intends to meet with Abbas in New York. It remains unclear whether Trump is planning on a one-on-one or a three-way meeting that includes Netanyahu. In any case, Abbas has already made his decision, and he plans an assertive speech, which, according to the source, will reveal the “real face of Netanyahu.”

“Netanyahu is a peace rejectionist, so there’s no way of advancing the diplomatic process toward a permanent arrangement with the Israelis.” This is what, according to the source, Abbas intends to say to the assembled representatives, even though it is clear to him and senior Palestinian officials that such a dramatic statement would bring an end to the honeymoon period with the Trump administration.

Abbas has already made his decision, and he plans an assertive speech, which, according to the source, will reveal the “real face of Netanyahu.”

The Palestinians never actually had a real honeymoon with Trump, although after his inauguration the Palestinians succeeded in blocking several measures planned by the new president that they saw as anti-Palestinian. This, in addition to the (ultimately incorrect) assessment that Trump was determined to force Netanyahu to make diplomatic advances, created a false impression of friendly relations among the various sides. Diplomatic efforts and brainstorming by the Palestinians have yielded nothing. Trump and his emissaries never said explicitly that a diplomatic arrangement with Israel would be based on the principle of two states for two peoples, and for several months, Trump’s emissaries have come to Ramallah for talks that cannot even be described as feelers, according to the Palestinian source.

“Mahmoud Abbas has little time left [for governing],” the Palestinian source said. “We now have to decide what’s next.” According to him, the Palestinian president's speech will call on member states to rally behind a diplomatic campaign that he plans to renew with full force to establish a Palestinian state within the 1967 borders, because, he said, “We will never achieve that in negotiations with Netanyahu.”

A hint of this emerging Palestinian line can be seen in the conduct of Riyad Mansour, Palestinian ambassador to the United Nations, when the Palestinian Rights Committee adopted its annual report in advance of presenting it to the General Assembly. Mansour is pushing the Security Council and General Assembly to take a constructive role in fulfilling the various UN decisions on the Palestinian-Israeli front, especially regarding the illegality of Israeli settlements in Palestinian territories conquered since 1967, as the 50th anniversary of the Six-Day War approaches, in October.

Abbas — who promised the Americans that he would halt all moves to appeal to UN institutions — also plans to announce that he is considering renewing applications for Palestine to be accepted as a member of more than 20 international organizations, including an application to the International Court of Justice at the Hague. According to the Palestinian source, a fierce debate is bound to take place among the Palestinians until the last moment concerning whether Abbas should use the word “considering” or announce definitively that he has made the decision. Hussam Zumlut, the Palestinian ambassador in Washington, and Mansour are advocating maintaining an escape hatch and not angering the Americans too much.

It is clear to the Palestinians that if Abbas takes a hard-line stance at the United Nations, it will lead to an open conflict with Trump that could close the door on the American channel, thus relinquishing US economic assistance (which even now is uncertain, given debate around the Taylor Force Act to limit support to the Palestinian Authority because of its aid to the families of Palestinians who have killed Israelis). Abbas wants, in one way or another, to recruit European nations to his struggle. Having viewed Trump’s conduct from the sidelines, they understand that they must take the diplomatic initiative.

After Abbas halted security coordination with Israel following violence on the Temple Mount in July, Israel canceled civilian cooperation with the Palestinians. Security coordination was restarted without an official announcement, although senior officers from both sides have not met at this stage. The cancellation of civilian cooperation is also only for show. Thus, the Israeli response will be interesting when Abbas stands at the podium at the UN General Assembly gathering and declares what Israel too believes he will say: “Enough. We’re sick of it. My diplomatic offensive starts now.”