Prime Minister Benjamin Netanyahu knows that if President Donald Trump presents his regional peace plan before elections in Israel, he will have a hard time winning. 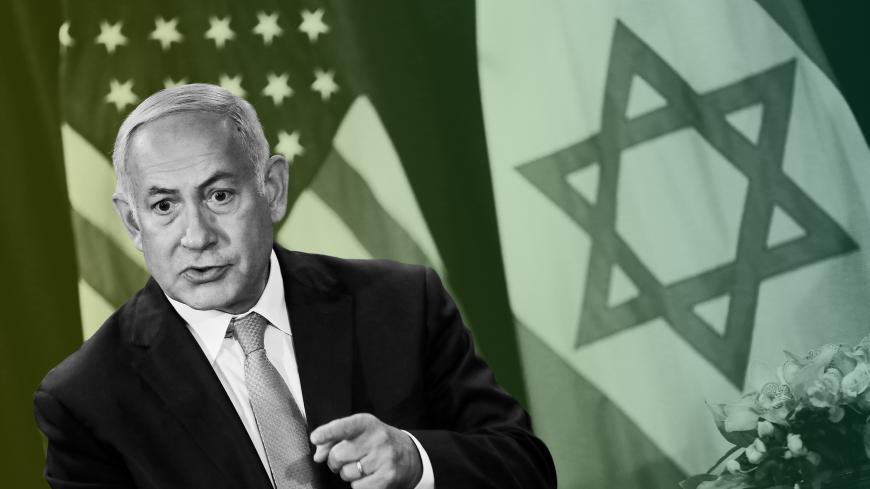 Israeli Prime Minister Benjamin Netanyahu speaks during a bilateral meeting with US President Donald Trump on the sidelines of the 73rd session of the United Nations General Assembly at UN headquarters, New York, US, Sept. 26, 2018. - REUTERS/Carlos Barria

Prime Minister Benjamin Netanyahu is trying with all his strength to prevent or at least postpone the presentation of US President Donald Trump’s peace plan, also nicknamed the Deal of the Century. A very high-placed political source in Jerusalem told Al-Monitor on condition of anonymity that “Netanyahu reached the conclusion that if the deal will be unwrapped in the coming months, before Israel’s elections, it will make it very difficult for him to win with a significant majority and it would harm his survival plan vis-a-vis the anticipated investigations and indictments against him.”

The information that recently reached Jerusalem regarding the main points of the American proposal arouses great worry in Netanyahu’s circle. A senior diplomatic source told Al-Monitor on condition of anonymity last week that the program includes a clear partition of Jerusalem into three sections, and “it is not about a Palestinian capital in Abu-Dis (a Palestinian village in the Jerusalem governance area) but in significant sections of East Jerusalem.” According to the source, there will be two capitals in Jerusalem: the Israeli capital in West Jerusalem including control over the Western Wall and Jewish neighborhoods in the city’s eastern sections, and the capital of Palestine in the eastern section. In addition will be a third region, within the Holy Basin, to be under international control.

Needless to say, the Israeli right-wing will raise tremendous protests over such a plan and cause a public uproar. Netanyahu will have to respond to the plan. According to another diplomatic source also speaking on condition of anonymity, “Even if President Mahmoud Abbas hurries to say ‘no,’ Netanyahu will still have to express his opinion. And so he will find himself caught between a rock and hard place, to say the least.”

Should Netanyahu say “yes” to Trump, he will find himself in great trouble with the right. Even if he doesn't answer Trump immediately and postpones his response, he will receive harsh criticism from his right-wing electoral base. That is the same base that abandoned HaBayit HaYehudi leader Naftali Bennett in the last elections in 2015 and instead voted for Netanyahu and offered him victory. If Netanyahu says “no” to Trump, he may lose the American president as a strategic ally and as Netanyahu’s most important diplomatic asset.

This is a difficult choice — one that Netanyahu does not want to face before elections. If he does not announce that he opposes the American program, it is almost certain that he won’t be able to gain control of a significant number of Bennett’s mandates. That is the ultimate dream of the HaBayit HaYehudi’s leader: Presentation of the American plan before elections would be Bennett’s golden opportunity to differentiate his party from the Likud. It would constitute a powerful impetus for Bennett to show his voters that the time is ripe to vote for him and not for Netanyahu.

Netanyahu is aware of the dangers of the American program on the political level. He is using all of his influence to delay it, but doing so cautiously and without leaving too many fingerprints. His head operator in this effort is the influential Israeli ambassador to Washington, Ron Dermer, who enjoys much prestige and is very close to the president’s Middle East team and especially to senior White House adviser Jared Kushner. Dermer is trying to recruit the support of Trump’s evangelistic base in order to show the president that his most faithful adherents do not want Netanyahu to be placed in a difficult situation and that it is preferable to postpone the presentation of the program until after the Israeli elections. As of now, the elections are expected to be held at the appointed time in November 2019.

The problem is that a postponement would be a significant move, while the situation on the Israeli-Palestinian front continues to deteriorate quickly. “No one knows [how long] Palestinian President Mahmoud Abbas will remain here with us,” a senior Israeli security source told Al-Monitor on condition of anonymity — hinting at Abbas’ advanced age. “The Israeli support of Hamas and the difficulties with Abbas may bring the situation to a boil and then to an explosion.”

Washington knows that continued delay in presenting the program is likely to complicate the situation and raise the odds of loss of control. Another danger hovering above the plan is that if and when it is delayed until after the Israeli elections, that may be the very same time in which Trump himself faces elections in November 2020. Then he would be open to additional heavy pressures to delay the program presentation to his second term of office. “This is exactly how Netanyahu wore down former US President [Barack] Obama with everything connected to the peace process,” a Western diplomat told Al-Monitor recently on condition of anonymity. The diplomat added, “With Trump, he [Netanyahu] will be much more soft-spoken and friendlier. But the result will be similar: stagnation.”

According to Western diplomats, the American peace team is split along the following lines: The right is occupied by the influential ambassador to Israel, David Friedman. He supports the settlements, is very wary of the Palestinians and is doing everything possible to defer the presentation of the program. Friedman is on Netanyahu’s side with everything connected to this explosive issue. On Friedman’s left stands US envoy Jason Greenblatt, described by the Israelis as a professional attorney who tries to compromise and bring the sides closer together while simultaneously placating his boss, Trump. Greenblatt, who is investing much energy into formulating the plan, wants to present it but has no deadline. To Greenblatt’s left is Kushner. He is viewed as the left-leaning person in the group; he really wants to bring the Israelis and Palestinians to the negotiation table and believes that it is indeed possible to present the Deal of the Century.

It is the stance of the president himself that contains the element of surprise. According to information from European sources, Trump is the one pushing for completion of the plan and its unfurling. Nonetheless, we must not forget that we are talking about an impulsive president: Trump’s behavior is not based on organized teamwork but on moods and gut feelings. “He believes that his legendary talents as a businessman will enable him to do the unbelievable regarding this issue,” an Israeli source told Al-Monitor on condition of anonymity. “The problem is that his [gut] feelings can be swayed relatively easily, mainly if he will understand that presentation of the program will harm his chances of re-election.”

At this stage, however, it seems that the odds are high that the American program will be unveiled in the coming months. The European Union is also gearing up for the plan, and eight key countries (France, Britain, Holland, Poland, Sweden, Belgium, Germany and Italy) came out with a clear statement on Dec. 19 to the US administration in which they bluntly said that any peace plan must include the partition of Jerusalem and be based on the 1967 cease-fire lines. Otherwise, it would simply not be viable.

Another interesting development is the weakening of the alliance between Israel and Saudi Arabia, which was reported this week in American media. The reason behind it: the murder of Saudi journalist Jamal Khashoggi. “Netanyahu relied on [Saudi Prince] Mohammed bin Salman as a powerful ally who would help him with regard to the American plan,” a high-ranking Israeli political source said this week on condition of anonymity. “Now Salman has his own problems and is lowering his profile regarding Israel. This is not good news for Netanyahu.”