Palestinian President Mahmoud Abbas has written a letter to US President-elect Donald Trump in an attempt to convince him not to move the US Embassy from Tel Aviv to Jerusalem. 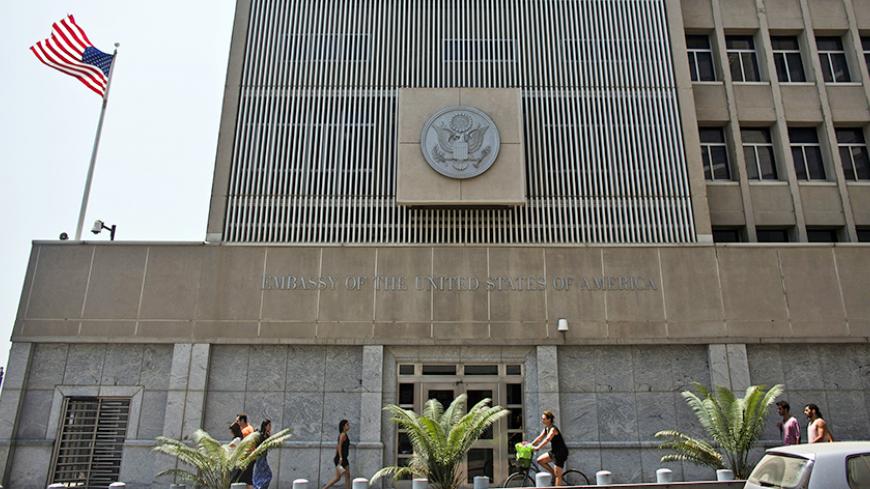 Pedestrians walk past the US Embassy in Tel Aviv, Israel, Aug. 2, 2013. - REUTERS/Nir Elias

On Dec. 9, Palestinian President Mahmoud Abbas sent a letter to US President-elect Donald Trump stating that the relocation of the US Embassy to Jerusalem would undermine the principle of two states for two people, as well as future prospects of an Israeli-Palestinian peace process.

“The letter was very cautiously phrased, in diplomatic language, and was well thought out,” a Palestinian source in Ramallah, the seat of the Palestinian Authority (PA), told Al-Monitor on condition of anonymity. According to the source, Abbas followed the suggestion of the future Palestinian ambassador to Washington, Husam Zumlut, and explained to Trump that moving the embassy from Tel Aviv to Jerusalem would complicate matters for the Trump administration that wishes to make its mark by making peace between Israelis and Palestinians.

“There were no threats and no warnings of catastrophes, not even of retaliatory measures by the PA or by Arab states,” the source said, “but rather a sincere desire to talk as leader to leader.”

The mildly phrased letter sharply contradicts the harsh rhetoric on the issue by senior PA officials. Saeb Erekat, the secretary-general of the PLO’s Executive Council who headed the Palestinian side in peace talks with Israel, warned that moving the embassy to Jerusalem would sound the death knell for the peace process with Israel, and that the PA would restrict its security coordination with Israel. Erekat even warned that the PA would no longer recognize Israel and would ask Arab states to expel US ambassadors from their capitals.

Riyad Mansour, the Palestinian envoy to the United Nations, went even further when he threatened to make life miserable for the United States in the various UN institutions if the decision does, indeed, go through.

For his part, Abbas, speaking to representatives of the left-wing Israeli Meretz Party who met with him at the beginning of January, claimed that he refuses to believe Trump will go through with the embassy move, but that if he does, the Palestinians have means to respond at their disposal. The Palestinian president did not elaborate, but the comment was made prior to an emergency meeting held in his office at which it was decided to tone down the rhetoric against the unexpected president who assumes office Jan. 20.

“We have no way of threatening the United States, nor of making life miserable for Trump. We are inconsequential, as far as he is concerned. How will we threaten him? With what? Let’s get serious and open our eyes and behave like rational people,” the Palestinian source said. “We can try and persuade, try and explain, but what sanctions can we [impose] on the great America?”

The Palestinian leader’s office is under no illusions. The source admitted that Ramallah is taking the declarations by the soon-to-be American president seriously and sees the relocation of the embassy as a done deal.

According to the official, the fact that Trump named David Friedman, a staunch supporter of Israel’s West Bank settlements, as his ambassador to Israel, and his Jewish son-in-law Jared Kushner as a senior adviser in his administration, sends a clear signal of his intention to make good on his campaign pledge of moving the embassy.

Given the way things are, the Palestinians believe that threatening Trump would only result in damage to the PA and to Abbas’ standing. The only way to dissuade Trump from such a move is by presenting him with germane, balanced arguments. The Palestinians further believe that the days before his inauguration are critical in this regard. They estimate that if they fail to change his mind during this time period, it will be too late. But even if their efforts fail, they have a contingency plan.

If the US Embassy is relocated, after all, it would be better if it were located in the western part of the city rather than in East Jerusalem. At the same time, the Palestinians will try to convince the new US administration to establish another embassy on the eastern side of town for the Palestinians, as suggested recently by former US ambassador to Israel, Martin Indyk, who led the US team to the Israeli-Palestinian negotiations. The idea was enthusiastically received by Abbas’ associates, but no one knows whether it has any realistic prospects of being implemented.

“You can count on one thing for sure,” the Palestinian source told al-Monitor. “There will be no Palestinian sanctions against the United States. We don’t have the tools and the means to punish Trump and his administration, and definitely not to call for the expulsion of American ambassadors from Arab states as suggested by Saeb Erekat. Who will they expel? The ambassador in Riyadh? Qatar? Baghdad? Beirut?”

Relocating the US Embassy to Jerusalem is tantamount to official recognition by the world’s greatest power of the city’s status as the capital of Israel and the absence of any standing for the Palestinians there. The Palestinian sensitivity over the status of Jerusalem generates great fears: An American move of that sort could be perceived as recognition by Trump of Israel’s annexation of East Jerusalem. This in turn could result in violent unrest, even if this is not directed by the PA and Abbas.

Will Abbas instruct the Palestinian security forces to block a violent Palestinian wave, if one does erupt in the wake of the embassy’s relocation? This is likely to be one of the toughest dilemmas with which he will have to contend.