Palestinian President Mahmoud Abbas is trapped by a US administration that does not understand the regional damage caused by the Jerusalem proclamation. 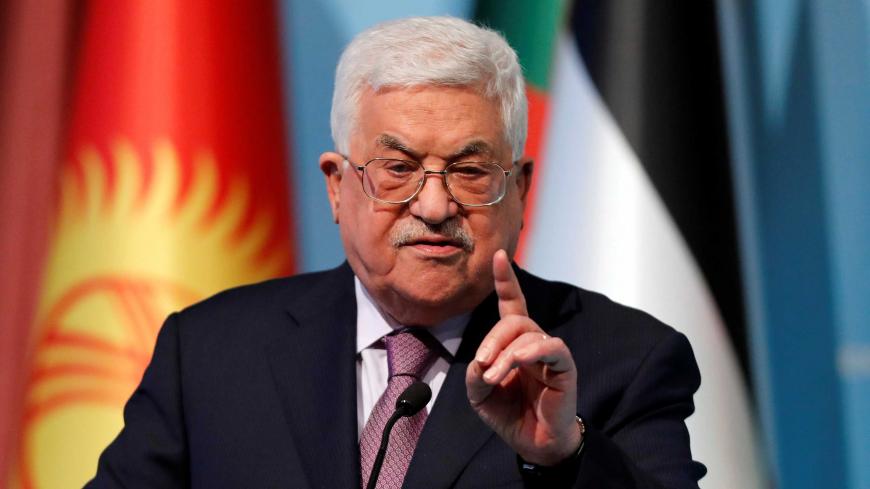 President Donald Trump’s Dec. 6 recognition of Jerusalem as the capital of Israel has not set off a regional conflagration, for now, but it dealt a serious blow to efforts to revive the stalled Israeli-Palestinian peace process. This assessment is only valid for the moment, because at any given time, something could go wrong and prompt a new wave of violence. That said, predictions of unrest throughout the Middle East in response to Trump's move were clearly overblown, whereas the declaration’s impact on the diplomatic front may have been underrated.

As of now, the Palestinians have abandoned the diplomatic arena. They are standing behind their rejection of the United States as an honest broker in the conflict, while enjoying sweeping support in most regional capitals. US Vice President Mike Pence was forced to delay a December visit to the region to possibly next month. Trump’s two envoys to the region, Jared Kushner and Jason Greenblatt, are persona non grata in the Palestinian territories.

The Palestinians are acting like the diplomatic option is dead. The White House believes this to be a passing emotional storm. According to Israeli military intelligence assessments, everything will go back to normal within several weeks. One intelligence official told Al-Monitor on the condition of anonymity, “[Palestinian President] Mahmoud Abbas has no alternative to the US. For now, he has to contain his people’s rage … but in the near future, it will be business as usual.”

There are also warnings amid such soothing assessments. “Abbas is on his last lap around the stadium,” a senior Israeli security official told Al-Monitor on the condition of anonymity. “In recent months, we’ve been seeing a different Abbas. More daring, more determined, someone who understands that there will be no more opportunities and has nothing to lose.”

Abbas' behavior is mostly reflected in his approach to Hamas in Gaza. He has refused to cut Hamas any slack and has not hesitated to humiliate the movement. As for his attitude toward Israel, Abbas appears committed to a diplomatic approach and opposing violence.

The question is whether he will stay on this course. Will he be tempted, in the waning days of his leadership, to adopt the tactics of his predecessor, PLO leader Yasser Arafat, when the second intifada broke out in 2000, by hinting by way of omission or commission that he no longer opposes violence? Israel is convinced that at this point in time, Abbas will not shift course. “He won’t stain his legacy at the last minute,” the security source said. Time will tell.

Meanwhile, the Ramallah-Washington axis has been shattered, and contacts between the United States and the Palestinians are mostly conducted through public declarations and angry speeches. A senior Palestinian source told Al-Monitor on condition of anonymity about a phone conversation between Trump and Abbas, during which Trump informed the Palestinian leader of his plan to recognize Jerusalem as Israel’s capital. According to the Palestinian source, Trump told Abbas, “I’m a strong president. Unlike my predecessors who made promises, I make good on my promises. But I’m also about to offer some good proposals to you, too.” Abbas asked Trump to elaborate, but Trump declined to say. “You’ll see,” he told Abbas. It turns out that this promise was insufficient to limit the damage incurred by his declaration. Abbas is an old hand. He has had his fill of promises and disappointments.

In the days prior to the presidential announcement, two top Palestinian officials were visiting Washington: the head of the Palestinian negotiating team, Saeb Erekat, who was there recovering from a lung transplant, and Palestinian intelligence chief Majid Faraj. The two were dealing with the crisis over the threatened closure of the PLO office in the US capital and preparing a planned White House visit by Abbas, during which he was supposed to get information from the president regarding his soon-to-be-announced peace initiative. “Erekat and Faraj met with Kusher and Greenblatt two days before the news about the expected declaration by the president,” said the Palestinian source, “but the Americans did not bother to update the Palestinians about the planned announcement. This was a serious blow to the trust between the sides. If something like that is in the cards and about to happen, you’re supposed to give your partners some warning so that they can protest, present their views, try to convince you.”

Shortly before the declaration, a top Israeli defense official was asked by his American colleague about the importance of the upcoming American declaration and its point. The Israeli was not wild about the idea. In Israel, said the official (according to another Israeli source), everyone knows Jerusalem is the capital.

The president made his controversial announcement against the advice of some of his advisers in the face of domestic political pressure from his evangelical constituency and his constant desire to signal power. “The greatest concern,” a source familiar with the contacts between Washington, Israel and the Palestinians told Al-Monitor on condition of anonymity, “is that the Americans will learn the wrong lesson. The fact that a third intifada has not broken out as a result of the declaration could make the Americans even cockier than they are, and Trump will be more certain than ever that he understands things much better than the professionals. This could be very dangerous.”

According to information reaching Jerusalem, Trump does not regret his decision. To the contrary, “Trump is thrilled by the declaration,” a senior Israeli minister, a member of the security Cabinet, told Al-Monitor on condition of anonymity. “It’s a brilliant political move that eased the pressure on him by his electoral base and will save him the embarrassment of having to sign the famous waiver [against the relocation of the US Embassy from Tel Aviv to Jerusalem] every six months.” Asked whether Trump’s actions would undermine his Israeli-Palestinian peace initiative, the Israeli minister answered, “I wish.”

The keys are now in Abbas’ hands. He understands that he’s in a bind, and he is using the Trump declaration to create an evacuation route should the US initiative portray Israel as a lover of peace and him as a rejectionist. In other words, the question is what his “final lap” will look like. Will it be a victory lap or a march of defeat? Will the aging Palestinian leader manage in the waning days of his leadership to achieve a breakthrough to peace or will he end his term in war? Everyone knows the Palestinian president will not live to sign a final status agreement between Israel and the Palestinians. The question is whether he is still committed to being the one who will lay the foundations for such peace.