Have the Palestinians blocked US Embassy move to Jerusalem?

Senior Palestinian officials believe that their restrained diplomatic approach through Jordanian and Egyptian channels helped suspend the relocation of the US Embassy to Jerusalem. 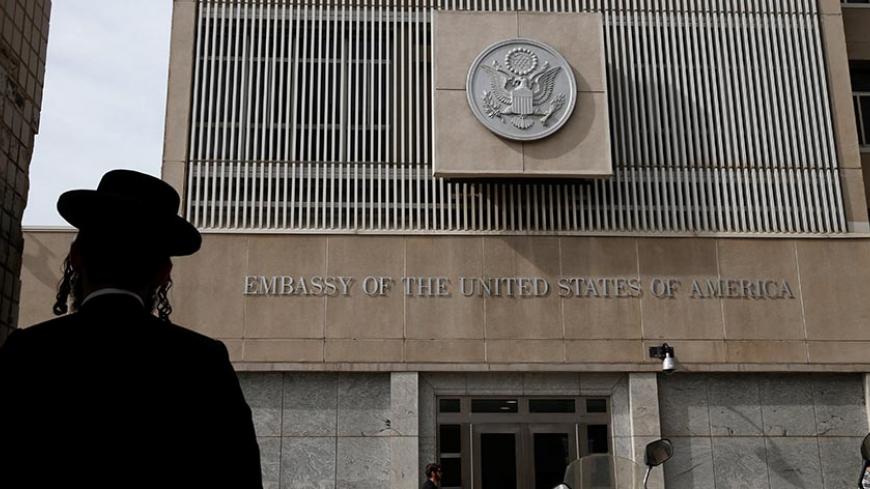 An ultra-Orthodox Jewish man stands in front of the US Embassy in Tel Aviv, Israel, Jan. 24, 2017. - REUTERS/Baz Ratner

The Palestinian Authority can breathe again, at least until US President Donald Trump’s next shoot-from-the-hip maneuver. According to the press briefing by White House Press Secretary Sean Spicer on Jan. 25, the relocation of the US Embassy to Jerusalem has been halted for now.

After Palestinian President Mahmoud Abbas understood that Trump was determined to follow through on his campaign promise to relocate the US Embassy from Tel Aviv to Jerusalem, his office was hit by a barrage of urgent phone calls. PLO Steering and Monitoring Committee Chairman Saeb Erekat, Abbas’ closest adviser, pressured Abbas to adopt an uncompromising stance. Erekat felt that Abbas should threaten that if the embassy is relocated to Jerusalem, the PA would make a declaration abolishing its recognition of Israel and even demand that Arab countries expel their American ambassadors in protest.

In contrast, Husam Zomlot, who is slated to be appointed Palestinian ambassador to Washington and is considered an expert on American affairs, advised Abbas to focus on convincing Trump not to relocate the embassy and to rely on his brain, not his emotions.

Ultimately the decision was made to give preference to the diplomatic approach, evidently considering that it’s not a good idea to anger the unpredictable Trump, especially at the beginning of his term of office. Erekat was sent to Moscow. Abbas met with Jordan's King Abdullah and spoke over the phone with Egyptian President Abdel Fattah al-Sisi. The two were asked to send Trump a clear message: that the Palestinians are ready, able and willing to open direct negotiations with Israel to resolve the conflict under the American umbrella and the new administration’s sponsorship. However, such a dramatic move as the relocation of the embassy would kill any chance of resuscitating the diplomatic process.

Al-Monitor was informed that Sisi told Trump that one-sided actions adopted now by the United States are likely to neutralize Abbas and rob him of the waning influence he still has among his people.

That message registered. What had seemed like a done deal until a few days ago took a sharp turn. Preparations for relocating the US Embassy from Tel Aviv to Jerusalem were halted. The explanation given to the Palestinians was, as they expected and planned, so as not to harm the diplomatic process.

A senior PLO source told Al-Monitor that the message, transmitted to the new American administration via various channels, was not a manipulative tactic designed to avert the embassy relocation. Instead, he said, it was a sincere message of willingness to renew diplomatic negotiations with Israel. According to the source, Abbas has not given up and still believes 2017 will be a fateful year regarding the peace process, despite Trump’s election and his unmistakable pro-Israeli statements. The source added that Abbas feels that the Trump administration will aspire to break the deadlock and be the first to score a breakthrough (and reach an agreement) where his predecessors failed.

Before the calming news came from Washington, a team was established in Abbas’ office to collect all statements made by Trump and his administration regarding the Israeli-Palestinian conflict. Every day, this team prepares a detailed file of events and statements to better understand the way the winds are blowing in the White House. Thus, for example, the Palestinians understood that the Middle East conflict is of high priority to the new president and that is why he appointed his son-in-law Jared Kushner and adviser Jason Greenblatt to deal with the complex issue.

“We need to decipher the new American administration and the complex, unpredictable personality of the president. We’ve done precise investigative work that gives us the tools to create an up-to-date picture,” said the source. Trump presented Kushner as the new Middle East senior adviser on the night he was sworn into office. According to the source, the PA did not expect that the president would have tasked his son-in-law with such a mission had he thought that peace was unachievable.

“All my life I’ve been hearing that’s the toughest deal in the world to make. And I’ve seen it. But I have a feeling Jared’s going to do a great job,” Trump said that evening. Addressing his son-in-law, he went on, “If you can’t produce peace in the Middle East, nobody can.” The source reported the Palestinians interpreted his words to mean that “Trump is serious, and his son-in-law has the key to his heart. If the new president wants to give the son-in-law he holds in such esteem an opening for success, then that must be the approach. Therefore, we proposed real negotiations without placing unnecessary obstacles on the path.”

As the embassy news circulated, Israel announced it was granting building and planning permits for about 2,500 housing units in the West Bank. In the past, the announcement of such massive construction in the settlements would have elicited sharp condemnation from the PA and even threats to freeze security coordination with Israel. This time, the Palestinian reproof was feeble. No threats against Israel were heard, and there were no protests against what looks like a green light from the Trump administration to large construction projects in the territories.

Did the Palestinian Authority know in advance about the Israeli announcement? The Palestinian source evaded answering the question. Obviously, the last thing that Abbas needs is for word to get around that he’d even consider agreeing to massive construction in the settlements to put out another fire that threatens him.