After President Donald Trump's announcement that he recognizes Jerusalem as the capital of Israel, Palestinian President Mahmoud Abbas had no choice but to ensure that Fatah's reconciliation with Hamas succeeds. 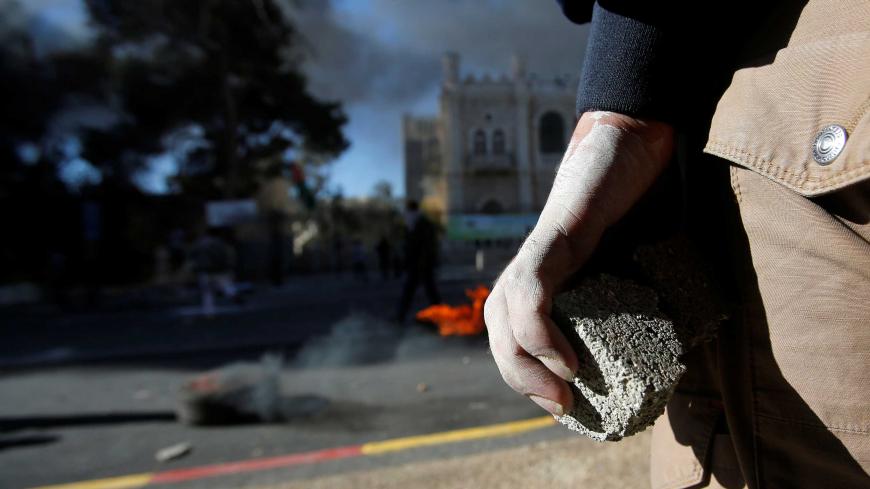 A Palestinian protester holds stones during clashes with Israeli troops as Palestinians call for a "day of rage" in response to US President Donald Trump's recognition of Jerusalem as Israel's capital, Bethlehem, West Bank, Dec. 8, 2017. - REUTERS/Mussa Qawasma

The next few days will show whether the Palestinian Authority (PA) is headed toward the kind of chaos that could result in the collapse of Palestinian President Mahmoud Abbas' government, or whether the Palestinians will manage to contain their outrage over President Donald Trump's announcement that he recognizes Jerusalem as the capital of Israel. "Abbas without a diplomatic solution on the horizon is like a president with no authority and no path forward," a senior member of the Fatah movement told Al-Monitor on condition of anonymity. He said that Abbas "put all his eggs into one basket and received a resounding slap across the face from Trump, shaming him before all the Palestinians and not just Hamas."

The fact is that Abbas is trapped. On one hand, he must join the "day of rage" protests declared by the Palestinian leadership and even appear as if he organized them. On the other hand, if the rage spins out of control, the flames could reach as far as his headquarters in Ramallah. As far as most of the Palestinian people are concerned, Abbas himself told them that Trump may favor Israel, but he (Trump) is also serious about achieving peace.

After a meeting of the Arab League in Amman and before his meeting in the White House with Trump, Abbas said March 30 that "the US administration of President Donald Trump is seriously considering a solution to the Palestinian issue." Four months ago, he gave a warm reception in Ramallah to an American delegation headed by the president's son-in-law, White House senior adviser Jared Kushner. He said Aug. 25, "I want to stress that the American delegations are working for peace, and we will work with them to reach what Trump calls a peace deal. We know things are hard and complicated, but nothing is impossible if you put in an honest effort."

All it takes is a quick look at the special relationship that was forged between the Palestinian team and American emissaries Jason Greenblatt and Kushner, or the close relationship between CIA director Mike Pompeo and Palestinian General Intelligence Service director Majid Faraj. It immediately becomes evident that the Palestinians may have pursued a policy of "respect and suspect" with the Americans, but they also truly believed that Trump wanted to achieve the "ultimate deal” — if only to show the world that he succeeded where all his predecessors have failed.

When Abbas announced his disengagement from Hamas and Gaza in June 2017, he knew that it would be a debilitating blow to the people of Gaza, leaving them without electricity, fuel, health services and salaries. But he was confident that this disengagement, 10 years after the Hamas military coup, would help him in his diplomatic efforts. Even after being forced to pursue reconciliation with Hamas under Egyptian mediation, he would not remove most of the economic sanctions that he imposed on the Gaza Strip.

"Abbas tried as hard as he could not to seem like he was working hand in hand with the rival movement from Gaza, since doing so could dim the diplomatic horizon of his grand vision. All of this was true until Dec. 6, the day Trump dropped his bombshell and it exploded right in Abbas' face," an Israeli security source told Al-Monitor on condition of anonymity.

That source added, "Now Abbas has no choice but to throw all his weight into ensuring that reconciliation with Hamas succeeds." He also claims that this is the most prevalent assessment among Israel's security establishment. According to the source, now that Ismail Haniyeh has called on the Palestinians to launch a new intifada, Abbas has no choice but to join the protests. Otherwise, he will be left behind — even though, no matter what happens, Haniyeh will be seen as leading the protests with Abbas tagging along behind him. The sources added that Abbas will have no choice but to remove the enormous obstacles that he placed along the way to achieving reconciliation, such as his insistence on control of the security forces in Gaza and their arms. In other words, he will have to agree to Hamas' insistence that it will not give up its weapons of resistance as long as the occupation continues and no diplomatic solution appears on the horizon.

Trump's announcement changed the internal Palestinian balance of power in an instant and turned everything around. Before this, the PA was the stronger factor in the Fatah-Hamas relationship, with Hamas pleading for reconciliation as a matter of survival. Now Haniyeh has no qualms whatsoever about announcing a new intifada. Abbas may have sharp political and ideological differences with Hamas. He may be utterly opposed to violence. Nevertheless, right now he should be praying that the reconciliation succeeds and his regime survives.

The next few days and weeks will determine in which direction the PA is headed. Abbas was forced to stand on his hind legs to stop the intifada of individuals that erupted in October 2015. Now he will try to recruit all of the Palestinian security forces to do whatever they can to prevent young Palestinians from clashing with Israeli forces at the checkpoints. Even Israel realizes that a single misstep during prayers on the Temple Mount on this Dec. 8 morning or in clashes in the West Bank during the "day of rage" announced by the Palestinians could ignite another round of violence. This, in turn, could alter the political reality dramatically.

"What we must not forget is that Fatah and Hamas already agreed to hold elections in 2018. Furthermore, they both know that in order to be elected, they must first put together a guiding agenda," the Israeli security source explained. "The collapse of the diplomatic option and the realization that the Palestinians will be hard-pressed to consider American mediation as capable of moving the diplomatic process forward over the next few years, in the era of Trump and Abbas, means that we will witness the same kind of rivalry between Hamas and Fatah as we saw in the past. Hamas will try to ignite an intifada, while Fatah, or more precisely, the PA, will try to put it out. What is different is that this time the two parties are connected by a reconciliation agreement and neither one wants to be released from it. They will both try to pull in their own direction, and the stronger party will end up the winner."

The way things look today, it's not hard to guess who the stronger party will be in this internecine Palestinian conflict.