How artful can Trump be when dealing with Palestine-Israel conflict?

Despite President Mahmoud Abbas’ much-anticipated visit to Washington, Palestinians don’t have high hopes that US President Donald Trump can achieve a breakthrough and reach a solution to the Palestinian-Israeli conflict. 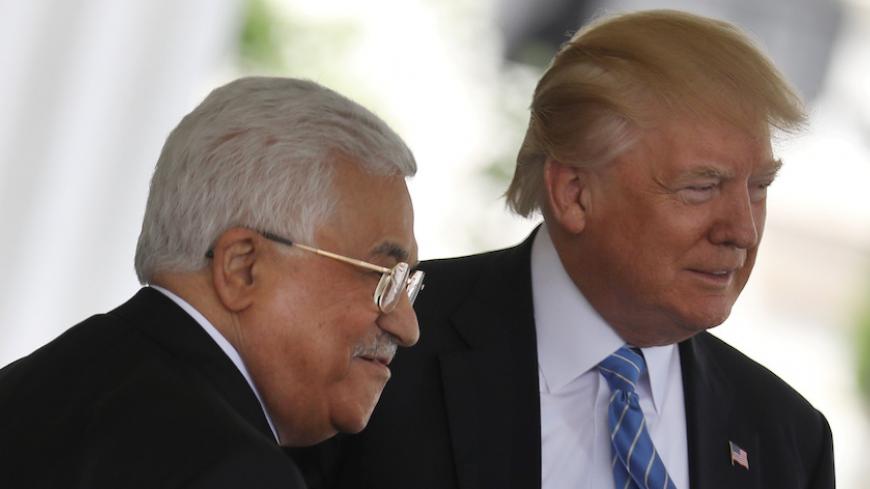 Palestinian President Mahmoud Abbas arrived in Washington this week to convey the utter desperation of Palestinians who see no light at the end of the Israeli occupation tunnel.

Hoping to get Trump personally engaged in the Palestinian-Israeli conflict, Abbas entered the White House on May 3 with a team that included his senior negotiator, Saeb Erekat; his head of intelligence, Majid Faraj; and Deputy Finance Minister Mohammad Mustafa.

Noting US President Donald Trump’s desire for personal recognition, Abbas heaped praise on the American businessman-turned-politician, calling him “courageous and wise” in his pursuit of the “ultimate deal” in the Palestinian-Israeli conflict. However, an in-depth look at Trump’s public positions is not so encouraging to Palestinians.

An examination of the statements shows clearly that, other than flowery language about wanting peace, the US president made no substantive remarks. He didn’t speak of the two-state solution, didn’t mention any freeze on Israeli settlements and was totally silent on the issue of Jerusalem — even though Abbas called East Jerusalem the capital of the hoped-for state of Palestine.

Perhaps the best example of the absence of genuine support for Palestinian statehood is the use of the asymmetrical terms “Israel and the Palestinians,” which implies Palestine is not a state. It should be Israelis and Palestinians, or Israel and Palestine. During the 1991 Madrid peace conference, when former US Secretary of State James Baker wanted to overcome this problem, he ordered that all signs used to identify the various participants were consistent: Israelis, Palestinians, Jordanians and so forth.

Anyone who has experienced or followed Israel’s public statements since 1967 will be very familiar with what Trump experienced. All Israelis, no matter their political positions, will publicly declare that they support and want peace. When it comes to details, that’s where things get rough.

Some of the Israeli talking points were stated shortly after the press conference during the daily White House briefing.

Press secretary Sean Spicer told reporters that some of the topics discussed included “preventing incitement to violence, particularly [by] media outlets directly associated with the Palestinian Authority.” It is highly unlikely that, if this issue was indeed discussed, Abbas did not bring up Israel’s role in incitement. But Spicer didn’t mention that.

Since taking office in 2005 after the death of Yasser Arafat, Abbas has been publicly and organizationally working on what he calls “cleaning up” Palestinian TV. The entire issue is reflected in a 2014 paper issued by the PLO’s Negotiations Affairs Department.

When the issue came up in November 2015 under the administration of then-President Barack Obama, it was agreed to revive the tripartite committee set up in 1998 and made up of Americans, Palestinians and Israelis. The mandate of this committee was to check incitement by both sides. Israeli Prime Minister Benjamin Netanyahu's government has repeatedly avoided agreeing to a meeting of the anti-incitement committee. In 2014, the Israeli daily Jerusalem Post quoted an Israeli official admitting that Israel didn’t want a meeting because “the Palestinians would use it to claim that Israel was also engaged in incitement.”

Despite the absence of anti-incitement committee meetings, the PLO’s Department of Culture and Information publishes a monthly report rebutting Israeli claims and reporting on Israeli incitement against Palestinians.

Trump also seems to have fallen for another diversionary Israeli tactic. Spicer adopted Netanyahu’s words from days earlier, telling the press that Trump “raised concerns about the payments to Palestinian prisoners in Israeli jails who have committed acts of terror and to their families.”

The irony is that the Israelis themselves have not stopped social benefit payments to the families of Palestinian prisoners who are Israeli citizens or residents of East Jerusalem. In fact, Netanyahu’s own party attempted in 2014 to pass a law to stop social welfare benefits, but the Israeli Knesset rejected the proposal, saying it would have constituted collective punishment of innocent families.

The fact is, 1,500 Palestinian prisoners in Israel, led by Marwan Barghouti, a leader from Abbas’ own Fatah movement, are on the third week of a hunger strike that began April 17, calling for basic humanitarian treatment. Amnesty International, the Red Cross and Israeli human rights organization B’tselem have publicly supported the prisoners' humanitarian demands: the right to regular family visits and to have books brought in, and for Israel to stop detaining Palestinians without charge or trial.

Most Palestinians have very low expectations of a breakthrough, leading the Abbas administration to use the kind of exaggerated praise Trump likes. But if Trump found in his first 100 days that being president is hard work, he will soon discover that getting Israelis to concede occupied Palestinian territories as part of a land-for-peace “ultimate deal” is much, much harder than he ever expected.