Palestine's security services continue to receive the bulk of the Palestinian Authority’s annual budget, to the detriment of other vital sectors. 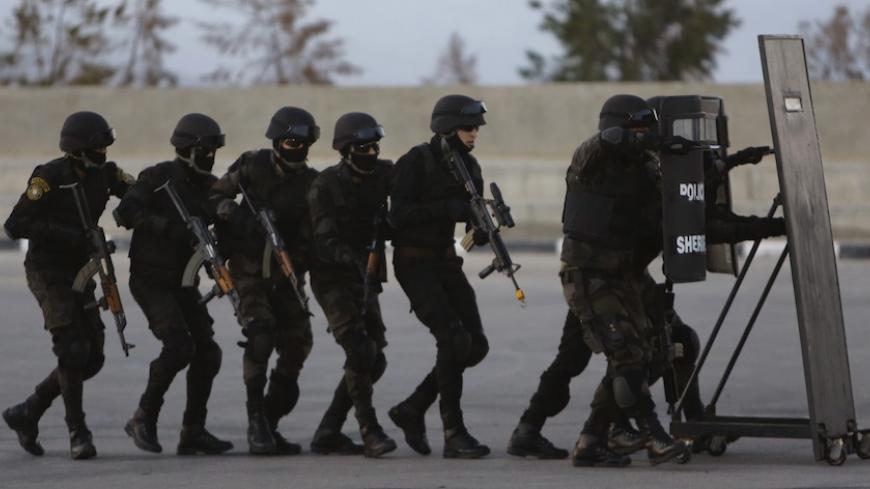 Members of Palestinian security forces demonstrate their skills during a military exercise in the West Bank city of Jericho, March 20, 2015. - REUTERS/Mussa Qawasma

The Palestinian Authority (PA) is going through a severe financial crisis, especially since Israel froze in December 2014 the transfer of tax funds, which amount to $130 million per month. However, surprisingly, the budget allocations to the security services in Palestine’s 2014 general budget amounted to 28%, or $1 billion out of $3.8 billion, according to a February 2015 Ministry of Finance report. In 2013, security expenses accounted for 19% the budget, and 31% and 32% in 2011 and 2010, respectively.

Although not available to the public, Al-Monitor was able to obtain figures from Palestinian official sources, who preferred to remain anonymous, reflecting the number of security personnel and their distribution among security services, as well as the security services’ financial expenses (wages, salaries and operating costs).

Vice President of the Legislative Council Hassan Khreisheh told Al-Monitor that he questions the veracity of the data published by the Ministry of Finance, since the numbers are inaccurate and represent an attempt to embellish the situation.

“The security-related expenditures are much higher, reaching 35% of the public budget,” he said. “The PA does not purchase tanks or planes, and the weapons held by security services are supplied by Israel, Jordan, Egypt, and Arab and European countries. Yet these expenses confirm that the PA intends to militarize society to preserve its existence.”

The PA approves its annual budgets without consulting the Legislative Council, which implies a lack of supervision over the work of the six branches of Palestine's security institution, including: the police, Preventive Security, General Intelligence, Military Intelligence, National Security Forces and Presidential Security.

The PA is seeking to increase the financial allocations granted to security forces in order to maintain internal security, prevent the execution of any armed operations against Israel and gain support for its political project (negotiations and a peaceful solution with Israel). Therefore, the security services continue to have the largest share of the budget — which is funded through Western aid, in particular from the United States — so these security services continue to coordinate with Israel.

In the Gaza Strip, the security and public order sector obtained, prior to the resignation of the Hamas government in June 2014, up to $261 million, or a share of 34% out of the total public budget.

Editor-in-chief of Gaza's Al-Eqtisadiah, Mohammed Abu Giab, told Al-Monitor, “The budget share allocated to the security sector is witnessing an unjustified annual increase at various levels, whether by increasing current operating expenditures, wages and salaries, or the number of new security personnel in the West Bank, totaling 70,000 employees.”

“In light of this steady increase in the security sector budgets and the number of employees [in it], the PA is showing clear negligence and slackening in developing and providing basic services to the Palestinians, which is affecting their decent lives," he said, "Therefore, the service sectors such as health, education and food are now witnessing further deterioration and collapse.”

Even at the height of the political stalemate between Israel and the PA over the past months, and in light of the division between the two authorities, the Israeli and Palestinian security forces maintained strong communication around the clock to hunt down armed groups affiliated with Hamas, particularly the ones targeting Israeli soldiers and settlers, which explains the security calm in the West Bank.

Therefore, the Israeli decision to freeze the Palestinian tax funds represented Israeli concerns about its negative impact, i.e., the suspension of security coordination by the PA. Israeli security services had warned of such suspension, fearing the collapse of the PA or its transformation into an authority hostile to Israel, should the tax funds remain withheld.

On April 25, the Coalition for Accountability and Integrity called for the PA to reduce the budget-draining security allocations, to reconsider Palestinian society's need for this level of security services and to re-appoint excess members of the security forces to work in civil fields.

Yet Palestinian decision-makers did not respond to such calls. A senior official in the office of President Mahmoud Abbas told Al-Monitor that the security situation is a high priority at the political level in light of the internal and external security challenges faced by the PA.

The official, who preferred to remain anonymous, said, “Israel continuously threatens the PA with repeated incursions into different parts of the West Bank. This may make us face the risk of collapse of the PA at any moment, while Hamas does not hide its desire to control the situation in the West Bank, which provokes the PA security forces’ fears of security unrest in West Bank cities and refugee camps.”

The PA believes its popularity among Palestinians is not at its highest, and thus it seeks to keep control over the situation through security and military force, thus prompting the need for more appointments and more funds.

This prompted the Arab Organization for Human Rights in the UK to demand on April 23 the dissolution of the security services, their consolidation into a single service and the transfer of the funds allocated to them to the health and education sector. The security sector is granted the lion’s share of the budget, while $27 million is allocated to the agricultural sector, $722 million to the education sector and $512 million to the health sector, according to the Arab Organization for Human Rights.

The rise in the security services budget confirms once again that the PA is an extension of the surrounding Arab regimes, which are ready to continue pumping money to these security services and officers, while the number of Palestinians living below the poverty line is on the rise.

The PA is well aware that the password to unlocking the floodgates of the continued international financial support for its budget lies in the continuation of security coordination with Israel. Thus, the PA grants the security services the lion's share of its budget, to the detriment of the other equally vital sectors in Palestine such as education, health and agriculture.