In light of the Palestinian government's budget failure to meet the needs of the Gaza Strip, the accumulated crises resulting from the Gaza siege will likely continue to exist despite the partial solutions that may emerge. 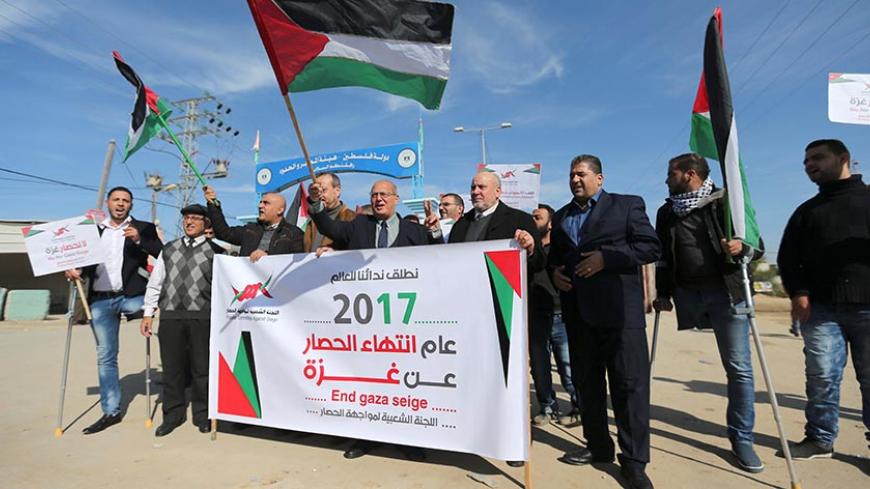 The head of the Popular Committee against the Siege, Jamal Elkhoudary (Center, holding flag), takes part in a protest against the Gaza blockade near the Erez border crossing with Israel, northern Gaza Strip, Jan. 5, 2017. - REUTERS/Ibraheem Abu Mustafa

RAMALLAH, West Bank — Since the beginning of 2017, the Gaza Strip has been struggling with a worsening electricity crisis that deteriorated after the Gaza Electricity Distribution Company announced Jan. 7 a breakdown in the second generator of the power plant due to the lack of fuel and the increasing power cuts. This has left citizens with a two-hour electricity supply per day.

The electricity crisis that prompted Gazans to take to the streets in several regions and for several days is but one out of dozens of crises afflicting the Gaza Strip due to the continuation of the Israeli blockade, which gradually started with Hamas’ victory in the legislative elections on Jan. 26, 2006, and intensified with the movement’s takeover of Gaza on June 15, 2007.

An economic report published Dec. 28 and prepared by Maher Tabbah, an economist, analyst and director of media and public relations at the Chamber of Commerce and Industry of Gaza province, said that all indications confirm that Gaza has entered the stage of economic collapse and turned into a model for the biggest prison in the world due to the continuation of the Israeli siege and the breaking out of three wars that caused massive destruction of its infrastructure and its economic sectors.

Tabbah told Al-Monitor that the unemployment rate, according to data from the Palestinian Central Bureau of Statistics (PCBS) for the third quarter of 2016, was 43.2% (218,000 unemployed in Gaza), while the poverty rate is 38.8% (38.8% of the population in Gaza live below the national poverty line of $637, and 21.1% live below the extreme poverty line of $480, according to PCBS data for 2011). Meanwhile, the number of Gazans who rely on assistance from international institutions such as the United Nations Relief and Works Agency for Palestine Refugees in the Near East amounted to about 1.5 million citizens in 2016.

The economic repercussions of the blockade on the Gaza Strip are exacerbating and can be highlighted by the slow pace of the reconstruction of what was destroyed in the 2014 war. The number of economic establishments targeted during the war in all commercial, industrial and service sectors amounted to about 5,153, with losses of $152 million. However, only $25 million out of the estimated $566 million needed for rehabilitation and reconstruction has been allocated, according to Tabbah, who said, “Last year did not witness any change at the level of the commercial crossings, which remained closed with the exception of Kerem Shalom. Therefore, nothing has changed in the crossings’ work mechanism.”

On the future of Gaza in light of these statistics, Tabbah said that the data does not bode well for 2017 in light of the continuing blockade, the absence of any political solutions and the escalating Israeli actions.

“For Gaza to survive, the blockade must completely stop, goods and building materials should be introduced to it and its products should be exported to the world,” he said.

The Popular Committee against the Siege said in a statement Dec. 30 that 2016 was the worst year of the blockade for Gaza, and that 2017 will witness an end to the blockade.

Chairman of the committee Jamal al-Khudari told Al-Monitor that the continuation of the blockade on the Gaza Strip indicates a further aggravation of the disastrous situation, which means a major effort must be made to end the siege. He said, “We in the committee launched an appeal to all the local, regional and international institutions in order for 2017 to be the year the siege ends through work with all the Palestinian, Arab and international institutions, as the continuation of the blockade would lead to more serious implications on life in the Gaza Strip.”

He added, “There should be Palestinian action calling on the international community to put pressure to end the blockade. There must be events calling for such pressure, and the steadfastness of the people must be strengthened. We need joint diplomatic, political and popular efforts to accomplish this.”

Meanwhile, on Dec. 27, the government in Ramallah started discussing the details of the general budget for 2017, which has yet to be approved, and held several sessions in this regard. On Jan. 3, the budget was revealed as a prelude for its submission to President Mahmoud Abbas for approval. Its proposed amount was worth $4.1 billion.

On Jan. 3, the government estimated in a statement that the total deficit in the public and development investment budget, before international aid, would be 4.12 billion Israeli shekels ($1.056 billion), and expected the total grants and financial aid to amount to half a billion dollars dedicated to the general budget and $92 million dedicated to the development budget. The statement estimated a funding gap for the proposed budget, once foreign grants are deducted and the arrears value is added, of $765 million, which requires “the adoption of austerity measures on all axes,” as per the government statement.

The government budget data do not bode well and cannot be relied upon to save Gaza, but Minister of Labor Mamoun Abu Shahla told Al-Monitor, “The government is trying as much as possible to support some of the weak economic activities in the Gaza Strip."

He said, “The government serves as a lung for Gaza as it provides it with aid and channels the international aid it receives at a time when the de facto government in Gaza [Hamas] imposes taxes on the people without offering them anything in return.”

Abu Shahla added, “The government's budget covers the salaries of the Gaza staff who used to work at the Palestinian Authority ministries and departments before the division [in 2007]. Hamas subsequently prevented those from getting to their places of work following its takeover of Gaza and thus compelled them to stay home. Also, the budget covers health and education expenses as well as sanitation and water projects, and it oversees reconstruction projects funded either by the government or by international donors.”