The Palestinian Central Bureau of Statistics is getting ready for the population, housing and establishment census in 2017, which will provide a statistical database for government development policies and plans. 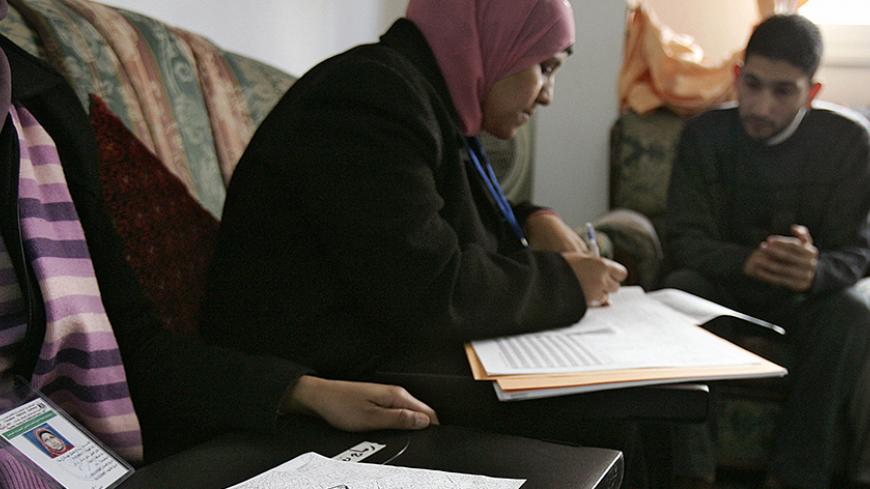 An employee from the Palestinian statistics department completes a form for the Palestinian population census during house-to-house visits in the city of Ramallah, West Bank, Dec. 1, 2007. - ABBAS MOMANI/AFP/Getty Images

RAMALLAH, West Bank — The Palestinian Central Bureau of Statistics (PCBS) will conduct an electronic population, housing and establishment census in 2017, across the 1967 Palestinian occupied territories, East Jerusalem and the Gaza Strip.

This census will be the third general census for population, housing and establishment to be carried out in the history of the Palestinian Authority (PA); the first was conducted in 1997 and the second in 2007.

The census will be held in 2017 in accordance with the recommendation of the United Nations to conduct a general census every 10 years, and as per the decision on Dec. 23, 2014, of the Council of Ministers to organize the next census in 2017.

Ola Awad, the president of the PCBS, told Al-Monitor, “The census aims to determine the number of Palestinians and their geographic distribution, with the goal of planning economic and social development projects and updating the population, demographic, social and economic databases in the State of Palestine.”

Awad said that the PCBS has been working for a year and a half to develop strategic plans for the census and to complete the necessary pre-census preparations, such as forming a national team to determine the built-up areas in the provinces and updating their digital field maps. She noted that the PCBS staff will receive information and training to conduct a pilot census before the official census, for which a date has not been set yet.

The 2017 general census will use e-forms rather than paper forms. A PCBS representative will help the head of household to answer the questions on a tablet; the official is there to assist especially the elderly and citizens who are illiterate. Subsequently, the PCBS staff will receive the citizens’ answers and store them in databases.

Awad said it is expected that the various stages — such as preparations, numbering of buildings, the pilot census and data collection — will provide 9,000 temporary jobs, and that dozens of software engineers have been recruited to update the digital maps of the residential areas across the various regions.

She added that conducting the general census using modern technologies and tablets is a quantum leap for the work of the PCBS and its future projects and plans, since it will save time and effort. She said, “We will be able to publish the preliminary results of the census just two weeks after its execution, instead of having to wait a whole year like we did when we relied on papers. The updated digital maps of the residential areas will support the population and housing surveys that we will be conducting in the future.”

Awad said that the estimated cost of the 2017 census is around $16 million. Financing agreements to conduct the 2017 census and to develop the capacity of the bureau's staff were signed with the governments of Sweden and Germany, in addition to written commitments by the representatives of the European Commission and the Norwegian and Swiss governments to provide financial assistance to the PCBS.

“The total amount of funding [pledged by] donor countries has reached $11 million, while the Palestinian government will secure the remaining amount of $5 million,” she noted.

Jerusalem and the Gaza Strip are the most prominent challenges for the staff in charge of the census, given the changes in these two areas since the 2007 census. Gaza witnessed three brutal wars (2008, 2012 and 2014) that led to changes in its population, housing and establishment maps, while Jerusalem has been witnessing a Judaization campaign, which started in 1967, in terms of population and housing.

Awad explained that the census will provide a clear picture of the magnitude of the changes brought about by the wars in the Gaza Strip. “Some areas witnessed displacement and others were completely destroyed. The census will give us the data and facts necessary to determine the size of internal displacement in Gaza to provide information for researchers who will conduct analytical studies,” she said.

She added, “The study of population changes and internal displacement and its causes and circumstances is not limited to the Gaza Strip; it also covers the West Bank. In the last 10 years, the provinces in the north and south of the West Bank witnessed a wave of internal migration to Ramallah where there are employment opportunities and where the PA’s institutions and ministries are located along with the international civil and private sector institutions.”

Awad insisted that the PCBS will hold the 2017 census in Jerusalem despite the difficulties faced by the staff there, in light of Israel's tightened control over the province. She pointed out that the separation wall divides the Palestinian residential areas in the West Bank and makes it hard for the PCBS staff to perform their jobs.

She added, “The census must cover all Palestinian territories without exception to be comprehensive and complete and to comply with international standards, which requires the noncoverage rate of the census not to exceed 5% of the covered areas — otherwise the results would be inaccurate.”

Explaining how the census results may be used and their effect on social and economic planning, Awad said that in the Gaza Strip, for instance, the census will provide accurate population growth rate indicators. “We will be able to know the socio-demographic and housing situation 20 years from now in the Gaza Strip, which currently accommodates around 2 million residents, as population density stands at 5,000 individuals per square kilometer [0.39 square mile]. We can only develop future social and economic plans if there is a comprehensive and general census,” she said.

Awad added that, despite the improvement in the use of statistical data by Palestinian policymakers in governmental institutions and ministries, "statistical data we publish — such as those on education, for instance — is not being taken advantage of as required." She said that the census "is a great treasure of statistical data available for everyone.”

Although the 2017 census will offer a comprehensive statistical database for Palestine — which presides over the International Association for Official Statistics until 2017 — these databases will remain underexploited if they are not translated into policies and plans for sustainable development, which is the most prominent challenge for the government and its various ministries.