Dalia Hatuqa reviews a new book, Unfree in Palestine, which discusses how Israel deploys the census to disenfranchise Palestinians. 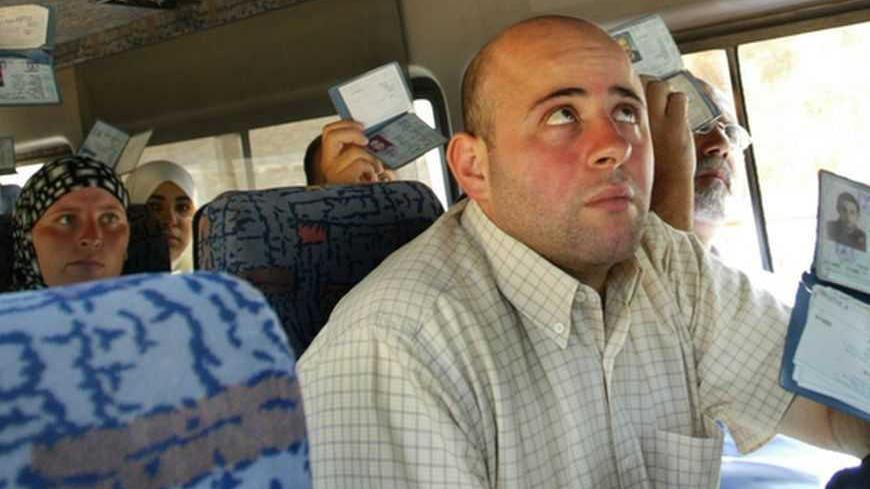 Palestinians show their ID cards to Israeli police inside a bus in Jerusalem Aug. 12, 2004. - REUTERS/Gil Cohen

In the pursuit of retaining as much land with as few Palestinians on it as possible, the government of Israel has historically engaged in various measures to dispossess the residents of the West Bank and Gaza Strip. The systemic nature of these efforts is detailed in a new book published by Nadia Abu Zahra, a Palestinian who lives and teaches in Canada, and Adah Kay, a British Jew, who reveal that this practice has long been used by Israeli authorities — with gargantuan ramifications.

Between 1967 and 1994, Israel revoked the residency of some quarter million Palestinians from the West Bank and the Gaza Strip. In 2011, the Israeli Ministry of Interior revoked the residency status of 101 Palestinians from East Jerusalem. These are summaries of some residency cases documented by HaMoked, an Israeli rights group established against the backdrop of the First Intifada. In addition to various human rights violations, the group documents cases of Palestinians affected by Israel’s regular practice of revoking residency rights, especially from those living in East Jerusalem.

The book, Unfree in Palestine, which debuted in the West Bank this week, examines the methods of control used by Israel to “occupy Palestinians since before birth” namely the use of identity documents, starting with the red-colored ID cards of the 1950s, followed by the subsequent orange version, now colored either green or blue (given to Palestinians in the West Bank and Gaza Strip or Jerusalem, respectively).

The writers trace the history of the denationalization of Palestinians through the bureaucratic tools of census and population registration, which, they argue, “enable coercion, black-listing and movement restriction” by Israeli authorities.

“Today Palestinians are grouped in different territories and countries,” Abu Zahra said. “Even if displaced, they all had a nationality at some point.” The authors point to the “largest denationalization in modern history taken by census takers” and call it a great irony that during 1948, Palestinians who fled or were forced into exile risked their lives to return just to be counted in the census.

“This census then became the very tool for their dispossession. The idea behind it was to figure out who would be excluded,” Abu Zahra explained. As thousands of men and boys were placed in captivity, 5,000 were excluded from the census, she said. That amounted to 14% of all Palestinian males between the ages of 15 and 60 at the time. Further, 13-15,000 Palestinians from the Naqab were secretly excluded and another 40,000 from the upper Galilee were left out right before the census was completed, followed by another 31,000 who lived in areas annexed when the armistice line with Jordan was later drawn, in addition to the 500,000 living in the West Bank and Gaza Strip. The end result was that only 69,000 were counted in the census, according to the author’s tally.

Abu Zahra and Kay said that until this day, the census remains the main instrument of denationalization, in addition to a centralized series of permits and identity cards that restrict movement and affect everything from residence to health access, employment, family reunification and even driving.

Since 1967, an estimated 14,000 Palestinians with Jerusalem residencies have had their identification cards revoked. Shortly after 1967, Israel carried out a census of Jerusalem’s Palestinian population and granted whoever was in the city at the time residency status — not citizenship. In 1995, Palestinians of Jerusalem were forced to start proving that their “center of life” was Jerusalem, i.e. provide documentation that they lived, worked and paid bills and property taxes (Arnona) in the city. Otherwise they would be stripped of their identity cards.

Even today, it is Israel — not the Palestinian Authority (PA) — that controls the population registry for all residents between the Jordan River and the Mediterranean Sea. Palestinians apply for ID cards or family reunification to the PA, which in turn, submits these applications to the Israeli authorities. The authors highlight how registration “can lead to discrimination and blacklisting,” effectively rendering the very same tool ostensibly used to grant the protections of residency an instrument stripping the holder of his or her associated rights.

Another consequence of these policies is coercion or the selective granting of certain rights for some people for some time in exchange for a service. The book cites examples of “collaboration,” which was prevalent throughout the 1948-1966 period and is indicative of the lopsided power dynamic at play in conflict-ridden areas around the world.

With the creation of the population registry came the absolute power to include or exclude subjects (citizens or non-citizens) from the state — and with it all of the rights which that entails (civil services, education, healthcare, residency) — through bureaucratic coercion. It is from this model that the denial of basic rights leads to the recruitment of collaborators.

Among the audience at the book’s Ramallah debut was a Birzeit University professor who recalled how in 1975 he was approached by Israeli authorities after he had applied for a phone line. He said he was offered to have that phone installed in exchange for information about his community. In a meeting with two intelligence officers at West Jerusalem’s King David Hotel, he remembered them asking him, “Can we call you on this phone from time to time to ask questions?” The professor politely refused and waited years before he finally managed to get a telephone installed at his house.