Israel has yet to transfer civil and social powers to the Palestinian Authority, thus leaving 40,000-50,000 Palestinians in Gaza stateless and without legal status. 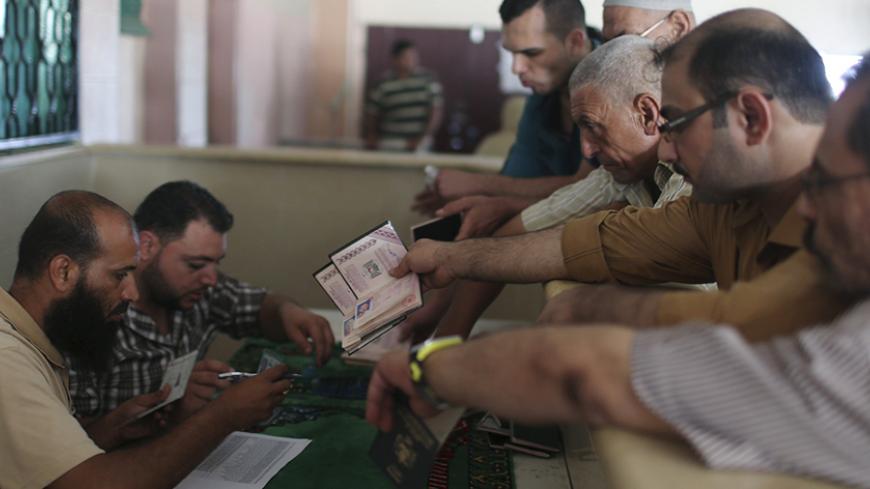 RAFAH, Gaza Strip — There are Palestinians who live in the Gaza Strip without legal status; their identification cards are not recognized by Israel for various reasons, nor do they have official status in any other country. In fact, those Palestinians bear the “Blue ID,” which is nothing more than a personal identification card that classifies its holder as “stateless.”

The card was given by the former Hamas government to Palestinians who entered the Gaza Strip through the Rafah border crossing with visitor permits after the Israeli disengagement from Gaza in 2005, or those with temporary travel documents issued by Arab or foreign countries. Blue ID cardholders see themselves as refugees and without legal status.

The Palestinian Authority (PA) was founded in 1993 as per the Oslo Accord, which is a set of agreements between the government of Israel and the Palestine Liberation Organization (PLO). However, Israel has only complied with the part related to security — the withdrawal from Gaza and the Jericho area — and is yet to transfer authority to Palestinians in civil and social affairs, such as the population registry.

According to paragraph 2 of Article 6 of the Declaration of Principles in Oslo, “Immediately after the entry into force of this Declaration of Principles and the withdrawal from the Gaza Strip and Jericho area, with the view to promoting economic development in the West Bank and Gaza Strip, authority will be transferred to the Palestinians on the following spheres: education and culture, health, social welfare, direct taxation, and tourism. The Palestinian side will commence in building the Palestinian police force, as agreed upon. Pending the inauguration of the Council, the two parties may negotiate the transfer of additional powers and responsibilities, as agreed upon.”

In this context, B'Tselem, the Israeli Information Center for Human Rights in the Occupied Territories, offers in a report published on July 21, 2013, more detailed information about the administration of the population registry: “The Oslo Accords stipulated that the PA would maintain and manage the registry and that it would have authority to issue ID cards and visitor permits as well as to register children under 16 born abroad, provided one of their parents was registered as a resident of the Occupied Territories. However, it was also stipulated that the Palestinians must notify Israel of every change they make to the Population Registry and must receive Israeli approval to grant residency to spouses and children of Palestinian residents through the family reunification procedure. Israeli approval was also required for issuing visitor permits for the Occupied Territories.”

In 2000, Israel discontinued updating its copy of the population registry, and it no longer recognizes the changes made by the PA. According to the B’Tselem report, Israel allows the PA to register only births and deaths and to replace damaged documents. As a result, neither the PA nor the Hamas government can issue ID cards to stateless residents nor approve applications for family reunification.

In 2012, media reports by the former Hamas government, which is currently the main authority in Gaza, stated that the government had so far issued 22,365 Blue IDs, the first of which was issued on Jan. 31, 2007. Meanwhile, B'Tselem mentioned in its report that 40,000-50,000 individuals in Gaza had no legal status. The center held Israel responsible for the situation due to its policy regarding the Palestinian population registry.

Those Palestinians are not allowed to travel nor can they conduct any civil transactions. Recently, they have fallen victim yet again, as they were not listed by the United Nations Relief and Works Agency for Palestine Refugees in the Near East (UNRWA) and Rami Hamdallah’s Cabinet among those who would be receiving damages after their houses had either completely or partly been demolished during Operation Protective Edge — the reason being that they do not hold an ID issued by the PA and one that is recognized by Israel.

Al-Monitor interviewed Jasir Dib al-Ghannam, who has no legal status. He is a Palestinian refugee born in 1942 in the village of al-Sawafir al-Gharbiyya, located in the occupied Majdal district (now Ashkelon). He left his birthplace for the first time in 1948, after which he and his family moved between several Palestinian cities before settling down in the Gaza Strip in 1949. Ghannam studied at UNRWA’s industrial school before obtaining temporary travel papers to Egypt provided by the Egyptian government at the time to Palestinian refugees.

When the Gaza Strip was placed under the Egyptian government’s rule between 1948 and 1967, Ghannam moved to Cairo in 1962 to continue his studies. But following the Six-Day War in 1967, Israel was able to occupy both the West Bank and the Gaza Strip, which led to declaring them closed areas. As a result, Ghannam could no longer return to Gaza and found himself forced to leave once more, this time to Saudi Arabia in 1968, seeking stability and work. This second emigration led to Ghannam’s classification as a refugee.

“In August and September 1967, the Israeli military conducted a census in the West Bank and the Gaza Strip. Israeli authorities then used this census as the basis for the Palestinian population registry. Palestinians who were not present in the occupied territories at the time were not recorded in the census. These were estimated at 390,000 Palestinian refugees. Among those refugees, 50,000 were from Gaza, some of whom fled the occupied territories or were deported by Israel. Other Palestinians absent from the census were Palestinians who were abroad at the time for their studies, business or another reason. All these individuals lost their status as residents of the occupied territories. Refugees who went from the West Bank and Gaza to Jordan and Egypt received temporary travel papers from these countries and used them as a substitute for passports. These documents had to be renewed once every few years.”

After Israel’s disengagement from the Gaza Strip in 2005, Ghannam returned to his family and stayed in Rafah, in southern Gaza. He applied for reunification at the Civil Affairs Department in Gaza, but he is still waiting to hear back.

He now finds himself without legal documents in his homeland, unable to conduct the simplest civil transactions, as government institutions refuse to deal with him. He tried to open a bank account only to be asked by the bank employee to bring witnesses to prove his identity. In addition to not being recognized by government institutions, he is also forced to use his wife’s name to conduct certain transactions, since she holds an ID issued by the PA and approved by Israel.

Ghannam has also been denied damages by UNRWA, because he’s not registered in the Palestinian population registry, despite his house having been partly destroyed during the last war in Gaza in 2014. Ghannam had to register with his wife’s name as a temporary solution.

Israel’s monopolization in running the civil affairs of Palestinians point to the fragility of the PA following the Oslo Accord; Palestinians are thus suffering more, while basic civil and legal rights are trampled on.