Israel's denial of residency permits keeps its Arab citizens from reuniting with their Palestinian spouses in Israel. 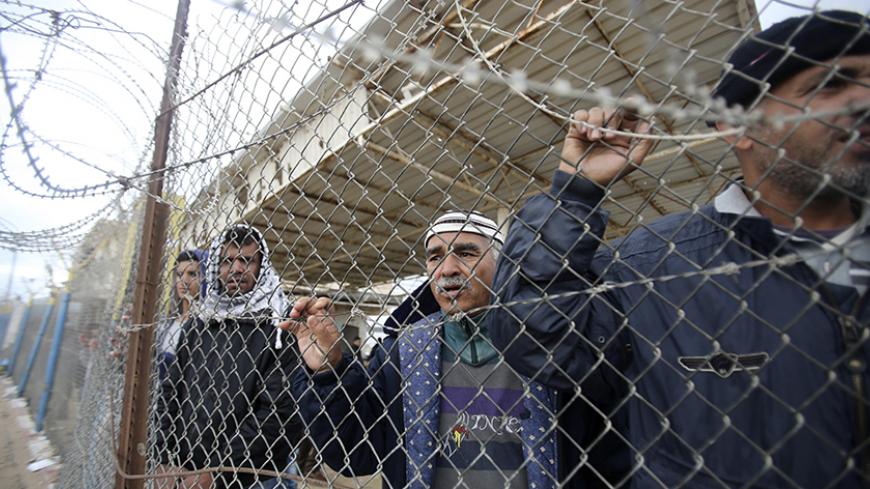 Palestinians stand behind a fence as they wait for their relatives to return to Gaza at the Rafah border crossing between Egypt and the southern Gaza Strip, Nov. 27, 2014. - REUTERS/Ibraheem Abu Mustafa

GAZA CITY, Gaza Strip — Israeli restrictions on movement between the West Bank and Gaza are not only an obstacle for Palestinians living there, but also for the Arab Israeli spouses of men or women holding Palestinian nationality.

After the outbreak of the second intifada, the Israeli government passed a temporary measure in 2003 to deny residency or citizenship to Palestinians living in the occupied territories. It has been continually extended, most recently in March 2014. Arab Israeli citizens were, however, allowed to enter Gaza to reunite with their spouses or families. The Israeli spouse must renew his or her residence in Israel every six months.

Mariam, an Arab Israeli woman, married a Palestinian from Gaza in 1996. Israeli authorities forced him to return to Gaza in 2004. Mariam followed him. She feels isolated in Gaza, where she and her husband live under difficult economic circumstances. Mariam cannot take advantage of Palestinian government services because she does not have a Palestinian identity card, but she receives part of her husband’s assistance from the United Nations Relief and Works Agency because he is a Palestinian refugee.

“I had always hoped for my husband and I to move to Israel, where life is better than here in Gaza. But this is impossible,” Mariam said. She also stated, however, that she is committed to her identity. “I am proud of my identity. I would never think of changing it. I don’t know what will happen to me in the future. I have no support here. But I also cannot abandon my husband.”

Mariam lived through the grinding Israeli war against Gaza in July. She said of the experience, “The last war was the absolute worst thing that I have lived through. We felt that we could die at any moment. But I decided not to leave my husband in Gaza. I stayed with him as we moved around from place to place in search of safety. In the 2012 war, I left Gaza and headed to Israel, but I was very worried about my husband, who stayed here.”

Perhaps Mariam is luckier than the Israeli wives who decided to stay in Israel despite the deportation of their husbands to Gaza. They typically raise their cases for reunification with the assistance of — often Israeli — human rights organizations, which defend them before the courts in trying to obtain Israeli citizenship for Palestinian spouses to reunite their divided families in Israel.

According to the Israeli human rights organization, B’Tselem, “Israel does not consider family reunification a right for the Palestinians, but rather a gesture of compassion.” Israeli authorities have not released the precise number of Israeli citizens living in Gaza, but based on data provided in 2013 by the Coordinator of Government Activities in the Territories to B’Tselem, of which Al-Monitor obtained a copy, about 425 Israelis live in Gaza, including 157 under the age of 16.

Shai Grunberg, spokeswoman for the Gisha Legal Center for Freedom of Movement, told Al-Monitor, “Israeli citizens married to Gazans have the right to enter Gaza without delay. But since the implementation of the disengagement plan in 2005, they have faced two main problems: bureaucratic procedures for obtaining visitor permits and difficulty getting children of Israelis born in Gaza being recognized [as Israelis].”

Israeli authorities require Gaza-born children of Israeli Arabs to undergo expensive genetic tests and go through complicated bureaucratic procedures. As a result, many of them approach human rights organizations to lobby for them. Gisha has helped children of Israeli citizens receive passports, which are guaranteed by law. According to Yehia al-Muhareb, lawyer at Al-Mezan Center for Human Rights in Gaza, Palestinian human rights organizations in Gaza also dedicate part of their work to getting reunification cases heard in Israeli courts.

On the Israeli side, Muhareb said, there are also difficulties in dealing with Israeli citizens who live in Gaza. He said, “We have complaints by Gaza citizens who were displaced from the 1948 territory and whose wives remained in the interior but whose reunification cases have not succeeded. … Even though they are citizens of Israel and have the right to access it whenever they want, there are cases when the Israeli side blocks their applications with little or no justification.”

An officer at the Erez crossing confiscated the ID card of an Arab Israeli woman, Iman, without justification. She told Al-Monitor, “After questioning me, the officer asked me to go to Gaza’s Civil Affairs Office to obtain a Palestinian ID. I rejected that. … My movement was restricted for two full years. I had no Palestinian or Israeli identity card. But Gisha assured me that my Israeli ID exists and that I have to go request it from the Israeli authorities. But the authorities requested that I stay in Israel for one month to get an entry permit to Gaza. This is hard for me, as I have children and family in Gaza, and I cannot leave them.”

Iman’s effort to recover her ID card is made more difficult since she has children who might obtain Israeli identities in the future. “I consider my identity card as my last resistance project. I insist on recovering it. It is my means to return to my country. And I will never give it up,” she said.

Palestinian researcher Mustafa Ibrahim told Al-Monitor, “Successive Israeli governments have tried to get rid of the 'Arabs of the interior' burden.” He also stated, “The Israeli authorities do not deal with Arab Israelis as citizens who have rights. Instead, it deports them and imposes discriminatory measures on them. At the same time, it refuses to recognize and grant Israeli citizenship to Palestinians who marry Arab Israelis as it fears this step might shift Israeli demographics.”

The right to establish a family is recognized around the world, but not in Israel, where security considerations and fears of demographic change have resulted in restrictions on freedom of movement. In addition, the bureaucracy involved in obtaining Israeli nationality complicates the life of Arab Israelis married to Palestinians, for whom family reunification is the only hope for a stable life.