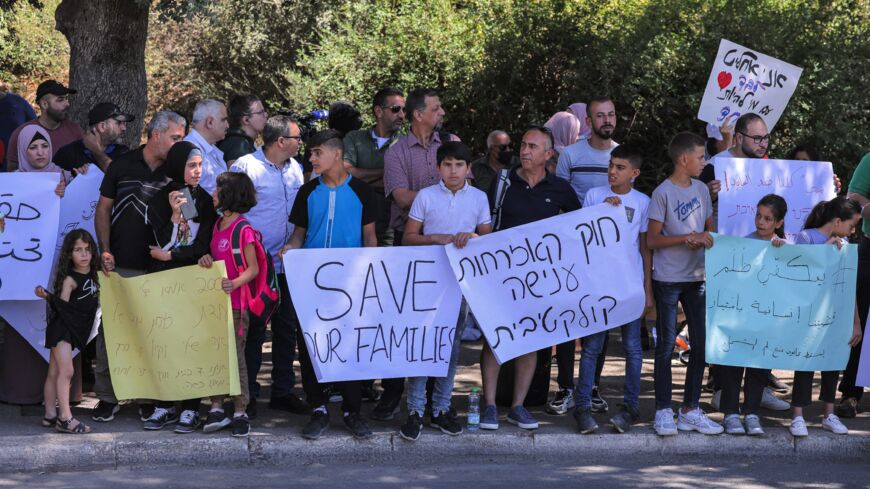 Demonstrators gather to protest outside the Israeli Knesset headquarters against the Israeli citizenship law on June 29, 2021. - MENAHEM KAHANA/AFP via Getty Images

RAMALLAH, West Bank — The Israel Knesset approved Israel's controversial citizenship law in a 45-15 vote on March 10. The law denies West Bank and Gaza Palestinians married to Palestinians in the 1948 territory (Arabs of Israel) the right to gain citizenship or residency status.

The law affects thousands of Palestinian families, as it prohibits any man or woman from the West Bank and Gaza married to an Israeli citizen from living in Israel and requires them to obtain temporary residence permits issued by the Israeli Ministry of Interior.

Sami Abu Ali, 43, from the Gaza Strip, married his cousin in the Negev region, in the south of Israel, in 2001. He fears he would be separated from his family in Beersheba and deported to the Gaza Strip because he does not have residency.

He told Al-Monitor, “I got married in 2001, and I was living with my family in Beersheba without a residency permit. In 2009, the Israeli police arrested me. And when they learned that I was from Gaza, they deported me to Gaza. I was forced to stay there away from my family for 10 years.”

Abu Ali pointed out that during his stay in Gaza, he applied for a family reunification request and a residency permit, but his request was rejected. In September 2019, he re-entered Beersheba illegally. “I could not stay away from my children anymore. When I left Israel, I had a 2-year-old daughter; she was 12 years old [when I came back],” he said.

“Seven of my cousins ​​who are married to relatives in the Negev are facing the same predicament. One of them has been separated from his family in the Negev for 15 years after he was deported back to Gaza. His wife visits him in Gaza once every five months. His daughter will marry soon, but he will not be able to attend her wedding,” he said.

Majida al-Ajouri, 52, hails from Nablus in the northern West Bank. She has been living in east Jerusalem for 21 years after she married a Palestinian from there. Even after her divorce in 2018, she remained in east Jerusalem as she got custody of her children. Under Israeli law, Ajouri has a residency permit to live in east Jerusalem, which is renewable every six months.

She told Al-Monitor, “When I was still married, I was denied family reunification for 21 years. I would get a residency permit in Jerusalem valid for a year before I got divorced. Now after my divorce, the residency permit is only valid for six months. Hamoked Center (a human rights nongovernmental organization that offers free legal aid to Palestinians living in Israel) is following up on my case with the Israeli Ministry of Interior, helping me renew my permit.”

Ajouri has been suffering economically since she is not allowed to work legally in east Jerusalem. Only Palestinians who hail from east Jerusalem have an Israeli identity card, which grants them rights that Ajouri does not have since she hails from the West Bank.

She owes debts for electricity and water services and rent, and she is struggling to buy groceries. “I have three boys and a girl that I have to care for alone. I do not get alimony or any financial allowances. I am waiting to collect the children's benefits from Israel's National Insurance Institute with a retrospective effect. This will help me pay my debts.”

Although the husband or wife from the West Bank or Gaza Strip can get a residency permit allowing them to live temporarily with their family within the Green Line, their daily lives remain shackled by several conditions.

Raed Abu Talib, 43, from Jenin in the northern West Bank, has been married to a Palestinian woman from Acre in northwest Israel for 16 years. “I live with my wife and two children and I have a residency permit that is renewed every year. Over the past years, I have been banned from driving a vehicle. But seven months ago I was allowed to get a driving license provided the vehicle is registered in the name of my wife.”

Abu Talib added, “Palestinians (from Gaza and the West Bank) in Israel cannot get a job legally. Employers require us to have a professional license, which forces us to work illegally. This denies us many of our rights. We are forced to pay double for health insurance. Those who hold an Israeli identity card pay 140 shekels (about $43) per month for health insurance, while I have to pay 280 shekels (about $86) per month. This is not to mention the discrimination I face when resorting to official institutions for any service. Also, if I ever have a traffic accident, insurance companies will not pay me any compensation.”

The Israeli citizenship law prohibiting family reunification was first enacted in 2003 as a temporary order, for fear that the Israeli Supreme Court would revoke it for its lack of legality. The Israeli government has ever since extended its validity on an annual basis. In July 2021, the government headed by Naftali Bennett brought it up for adoption as a regular law, only to see the bill defeated.

Amid the failure to extend the ban, Abu Talib, along with 27 affected families, filed a case in September 2021 with the Supreme Court in Jerusalem against Interior Minister Ayelet Shaked for family reunification (allowing them to get an Israeli identity). The court addressed the minister in this respect, but she kept stalling until the bill was finally passed into law this March.

Abu Talib explained, “For a year now, I have been working on collecting the documents required to renew my residency. These include water bills, electricity bills, tax vouchers, school bills, health insurance and bank statements. They must be submitted to the Ministry of Interior three months before the expiry of the residency.”

Meanwhile, affected families cling to a faint hope that the law would be repealed by a decision of the Supreme Court. The Adalah Center, a Palestinian Arab-run legal center in Israel, petitioned the court March 13 to get this law abrogated.

Based on the information available to it, the center said that approximately 12,200 wives and husbands of the residents of the West Bank inside the Green Line and Jerusalem live with temporary permits under various reunification procedures. During the period from the temporary order’s expiry in 2021 and until February 2022, around 2,800 new requests for family reunification were submitted. Only 77 were approved.