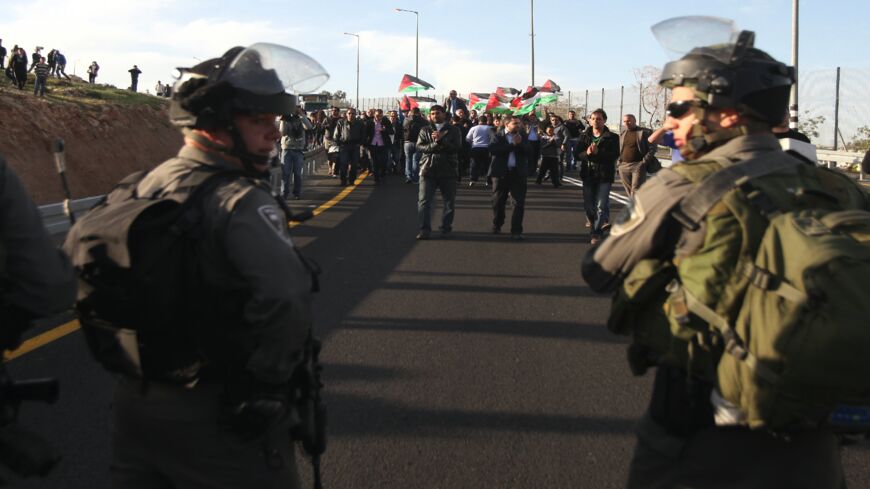 Israeli soldiers stand ready to prevent the progress of a symbolic wedding party toward the Israeli-constructed controversial separation barrier close to the Israeli-manned checkpoint of Hezma in the Israeli-occupied West Bank, between Jerusalem and the Palestinian city of Ramallah on March 9, 2013. The ceremony was organized by Palestinians to denounce what they call the "racist laws that prohibit the reunification of families." In January 2012, the Israeli Supreme Court endorsed a law banning Palestinians married to Israeli Arabs from obtaining Israeli citizenship or residing in Israel. - ABBAS MOMANI/AFP via Getty Images

In the midst of Israel's reoccupation of the West Bank in 2002, an often repeated lie became the basis of a racist Israeli law. The fabrication was that Palestinian men from the West Bank marry Israeli Arab women for the sole reason of having an opportunity to enter Israel and carry out acts of terror.

No proof was ever presented showing this absurd claim, yet in 2003 the "Citizenship and Entry into Israel Law" passed, barring West Bank and Gaza residents from the automatic Israeli citizenship typically granted to those who marry Israelis. Palestinians and some Israelis have consistently argued that the law is a naked attempt to lower the number of Israeli citizens of Arab origin. What has been less discussed is that this law has affected Palestinians from Jerusalem who are Israeli residents, and it is seen by Palestinians as an attempt to lessen the number of Arabs who live in a city Israeli Jews consider their united and eternal capital.

The process began in the Ariel Sharon administration. The temporary law that originated in a 2002 Cabinet order passed and suspended the issue of citizenship on family reunification grounds between Israeli citizens and residents of the West Bank and Gaza.

The Knesset enacted the law on July 31, 2003. The law forbids Israelis married to, or who will marry in the future, residents of the occupied territories from living in Israel with their spouses. Israelis married to foreign nationals who are not residents of the occupied territories are still allowed to submit requests for family unification on their behalf.

Every year since, this temporary law is re-voted on in the Knesset, and naturally, with right-wing governments in Israel since, the law has passed. In mid-2005, and as a result of litigation by an Israeli human rights organization, in the interim, the law was tested against Israel's Basic Laws, which operate in a manner similar to a constitution, when the Association for Civil Rights in Israel filed a 2003 petition to have the law struck down.

While the law applies to everyone regardless of age and no one could get temporary or permanent residency or citizenship in Israel in 2005, the Israelis allowed Palestinian families where the husband was under 35 years of age and the wife under 25 years of age to receive military stay permits, allowing them to live in their homes in Jerusalem or Israel.

According to the Israeli human rights organizations B’Tselem and HaMoked, the new law also harms children born in the occupied territories to parents who are residents of East Jerusalem. The Ministry of Interior changed its procedures regarding the registration of these children in the Population Registry. Rather than filing a "Request to Register a Child," it became necessary to submit a request for family unification for them. Under the new law, such requests are not allowed. As a result, it is impossible to legalize children's status in Israel.

Jessica Montell, executive director of HaMoked, told Al-Monitor that “70% of the persons affected by this law are residents of East Jerusalem and not Israeli citizens. In fact, the law disproportionately harms the weakest population: women from poor families with few tools to navigate this hostile bureaucracy."

The nearest this racist law came to being challenged came in 2006, when it was upheld in a split 6-5 High Court ruling in which Chief Justice Aharon Barak was in the minority and argued that "the appropriate goal of increasing security is not justifying severe harm to many thousands of Israeli citizens."

The law was challenged again in 2007. A number of human rights organizations and public figures petitioned the Supreme Court, arguing that the law violates the right to family life and equality of Palestinian citizens of Israel. In 2012, the Court issued its decision rejecting the petitions and confirming the constitutionality of the law. The majority of the Court ruled there was no violation of the right to family life or equality. The majority of justices explained that the Palestinians in the West Bank and the Gaza Strip are considered to be "enemy nationals." This, for the majority, is considered a relevant distinction that justifies the law.

In the Knesset, left-wing Meretz Party leader Zehava Galon, who was one of the appellants, criticized the Supreme Court’s decision, saying, “The court has gotten tired of battling racism. The decision to reject my petition is the result of the campaign to weaken the Supreme Court.”

She added, “It’s too bad the Supreme Court did not erase one of the most shameful stains in the Israeli law book, which deals a fatal blow to the fundamental right to family life and equality. The Court has given legitimacy to limitations on the freedom of marriage of Israel’s Arab citizens, to the dismantling of entire families, and to discrimination against citizens only because of their ethnic and national identity.”

Fast forward to 2021, when Meretz and the Islamic Raam party are part of the Yair Lapid/Naftali Bennett governing coalition, and again this temporary law has come up for a vote. However, in a twist of political opportunism, the opposition Likud coalition has suddenly decided to embarrass the right-wing Bennett government by voting to repeal the law, knowing full well that Meretz and Raam would certainly vote to repeal as well, thus embarrassing the right-wing coalition. In a twisted way of thinking, opposition leader Benjamin Netanyahu wanted to prove that by removing this law he was indeed replaced by a left-wing coalition, even if this particular issue was voted on with his own right-wing Likud party and its coalition members.

The vote never occurred, as parliament postponed it. Meanwhile, a compromise appears to have been worked out that will allow another twist of political absurdity: Raam could abstain from the vote in favor of a one-year extension of the law. Sources tell Al-Monitor that Raam is discussing a compromise in the law for which they are willing to abstain on the following conditions:

* Hundreds of families who had requested family reunification before 2003 would be allowed to renew their request to receive permanent residency.

* Dozens of families that applied for family reunification after 2003 and have had no security problems will be allowed a quick resolution in the process to resolve their situation.

* All families affected by this law should have the right of movement and be able to receive all needed medical treatment in Israel akin to Israeli citizens and residents.

Montell tells Al-Monitor that if this information, which has been published in the Israeli media, is accurate, the Raam accomplishments in mitigating the harm of the law are “largely fake news — most of this has already been accomplished through litigation."

She said some of the compromises being paraded by Raam are not new but had already been changed as a result of legal efforts by HaMoked aimed at upgrading the status of most of those married before 2003. “Only a few people will benefit from the Raam compromise," she concluded.

Israeli Knesset members are facing once again the absurdity of racist laws that affect human beings and couples who have chosen partners from across the green line. They are being punished for their choice of loved ones by being denied the right to live where they choose. To many, this is the ultimate proof of racism in Israel.