Arab-Israelis married to Palestinians from the West Bank or Gaza Strip realize that the measure failed to pass only because of squabbling between the right-wing parties who are sure to promote similar legislation. 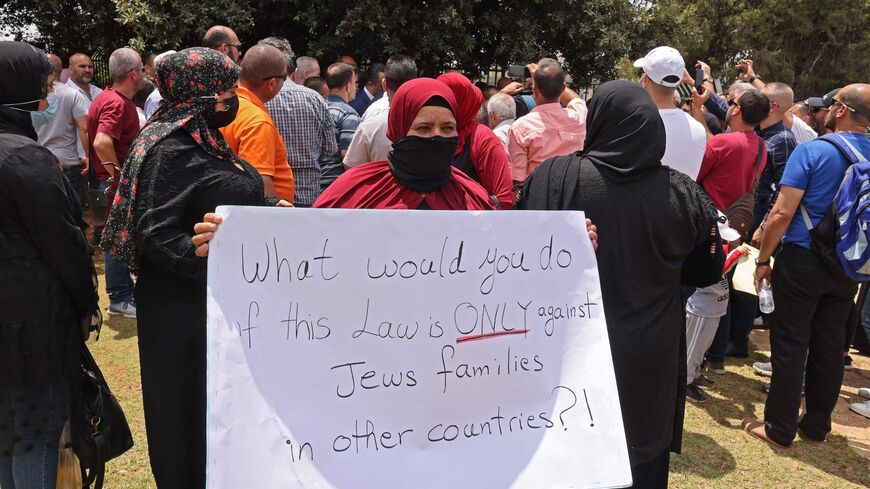 A woman holds up a sign against a controversial amendment to Israel's citizenship law during a demonstration by Arab-Israelis ahead of a vote by the Knesset on the legislation, outside the Knesset building in Jerusalem on July 5, 2021. - MENAHEM KAHANA/AFP via Getty Images

RAMALLAH, West Bank — Asmahan Jabali, who lives with her husband in the city of Taybeh, beyond the Green Line, is preparing to apply to the Israeli Ministry of Interior for reunification with her family, allowing her to live with them inside Israel without the need to renew her annual residency permit.

Jabali is from the city of Tubas in the West Bank. She married an Arab-Israeli 26 years ago and they have three children. However, she has lived with her family in Israel in fear that the permit allowing her to reside there wouldn’t be renewed.

“There have been many times when my residency permit expired and I had to leave my family for the West Bank until the new permit was issued,” Jabali told Al-Monitor.

She expressed concern about being denied family reunification even now that the controversial amendment to the law governing citizenship and entry into Israel failed to pass in the Knesset. “This does not mean the Israeli Ministry of Interior will approve the requests quickly and easily, especially since Interior Minister Ayelet Shaked is well known for her racism and extremism against us.”

Taysir al-Khatib, an activist from Acre in northwest Israel, told Al-Monitor, “I married a girl from Jenin in the northern West Bank 16 years ago. We spent the first two years in hiding and constantly moved between Acre and Jenin. We were unstable, but then she obtained a temporary permit to live in Acre.”

Khatib pointed out that his wife's situation is a constant threat to the family's stability, saying, “This temporary permit is a sword hanging over our necks that can destroy our family. It prevents my wife from driving a vehicle or moving freely and working in public institutions, so it is like a prison.” He intends to apply for family reunification for her.

On July 6, the Israeli government failed to extend an amendment to the law when the vote was tied.

In 2003, the Israeli government temporarily approved the provision, which prohibits Israelis married to Palestinians residing in the Gaza Strip or in the West Bank from giving Israeli citizenship or residency to their spouses under family reunification. Two years later, the law was changed to allow women over the age of 25 and men over the age of 35 to apply for temporary permits to live in Israel with their families, while still not being granted citizenship.

Many Palestinians remain fearful as they believe the government will soon introduce a similar law or obstruct Palestinians' requests for family reunification.

Jaafar Farah, director of Mossawa, an advocacy center for Arab citizens inside Israel, told Al-Monitor that the failure to renew the law is a victory, but the real battle to reunite families and achieve their economic and social rights starts now.

He pointed out that not extending the temporary citizenship law does not mean that families will obtain citizenship and economic and social rights, as the process of family reunification may take years. He said Mossawa is currently studying several legal options.

Farah added, “We expect the Israeli government and right-wing parties to retaliate in the coming months. Shaked refused to accept the reunification requests submitted by Palestinian families in the past few days, arguing that there are no procedures to process them.”

There are no official figures on the number of Palestinian families in need of reunification, but Farah said that it is more than 25,000. Some 15,000 families have temporary permits.

Palestinians realize that the measure failed to pass not out of love for them, nor because Israeli lawmakers realized that the law is racist and keeps families apart, but rather because of the squabbling between the right-wing parties who actually do support it. The Likud voted against the law to embarrass the government it was left out of.

Arab Knesset member Aida Touma told Al-Monitor that dropping the law at this stage is of great importance because it reflects the depth of the political crisis in Israel, and because it gives hope to thousands of Palestinians.

Touma stressed that this is a temporary victory and the battle continues over reuniting Palestinian families, pointing out that the Israeli government is already working on a similar law.

“Had it not been for the political crisis and the quarrels between the Likud, which lost power, and the new government, this law would have passed. Unfortunately, the majority of Israeli politicians support the ban. Even parties that had previously rejected this law now supported it, such as Meretz and Raam, two of whose members voted for the law.”

Touma noted, “Dropping the law opens the way for Palestinians to submit thousands of requests to the Israeli Ministry of Interior. The right-wing racist Shaked will use all means to reject the requests, but the absence of the law allows for an appeal against the Interior Ministry.”