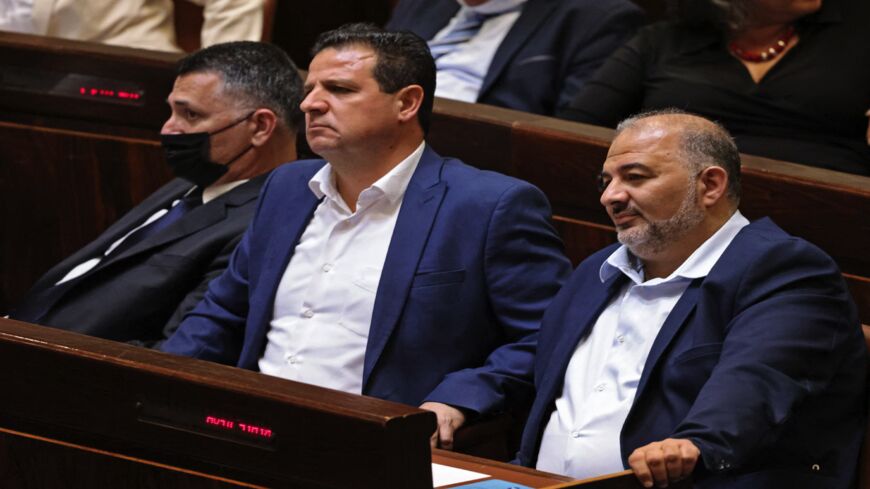 GAZA CITY, Gaza Strip — The new Israeli government is expected to renew in early July the Citizenship and Entry into Israel Law, which prohibits Israelis married to Palestinians residing in the Gaza Strip or in the West Bank from passing on the Israeli citizenship or residency to their spouses for family reunification purposes.

In a surprising move, Mansour Abbas, leader of the United Arab List (Raam) and member of the Israeli government coalition, agreed in a June 21 meeting with Prime Minister Naftali Bennett and Interior Minister Ayelet Shaked to maintain the law, provided that Shaked publicly commits to excluding humanitarian cases, the Israeli Broadcasting Corporation reported on June 22.

The law also prohibits the entry of Arabs from countries hostile to Israel, such as Lebanon, Syria, Iraq and Iran, for family reunification purposes.

The law is limited to family reunification cases and does not touch on the entry to the Israeli territory for business purposes or medical treatment.

The law was issued temporarily in 2003 in light of fears that Palestinians affiliated with factions enter Israel under the cover of marriage. Since then, it has been renewed on a yearly basis.

Fatima Shawbaki, 35, who hails from Nablus in the northern West Bank, married Ihab Abu Jaber, 37, who lives in the city of Lod in northern Israel. The Israeli law has prevented the couple from living under the same roof for more than two years now.

Shawbaki told Al-Monitor, “I met Ihab on Facebook and we fell in love. Then, he came with his family to Nablus, where we got married in 2013.”

She added, “We spent two years in the city of Nablus and we had two children. Ihab later asked me to move to Israel, considering that the living and working conditions there are better. Israel has repeatedly rejected my residency application, which has been very shocking and prevented me from living with my husband.”

Since 2015, Shawbaki has been able to see her children once per year only when her husband and kids visit Nablus for a few days, before they return to Israel.

The Palestinian Ministry of Foreign Affairs criticized in a June 18 statement the Israeli law and denounced it as a racist decision par excellence.

The statement read, “The law prohibiting the reunification of Palestinian families in the West Bank, including East Jerusalem, as well as the Gaza Strip, is designed to deny Palestinians the right to citizenship and to reside with their spouses in Israel.”

The ministry vowed to follow up on what it described as an Israeli violation of human rights guaranteed under the international law, at all levels, most notably the Human Rights Council, and will demand that Israel stop preventing family reunification for Palestinians, which is a legal, humanitarian and moral right of theirs.

Ahmed al-Tamimi, head of the PLO’s human rights and civil society department, told Al-Monitor the renewal of the law is “the worst form of persecution and racial discrimination by the Israeli authorities against the Palestinians.”

He said, “This law is a clear representation of the Israeli apartheid, which questions its democracy before the world.”

"This law is a clear violation of human rights," he added, as it "divides Palestinian families and controls their feelings and right to choose freely."

Taha said, “It is a very racist law. How could Palestinians be prevented from being with their husbands or wives who live in Israel simply because Israel views that all Palestinians pose a threat to its national security?”

He indicated that hundreds of Palestinian families living in Israel have been deprived of their fathers or mothers due to this law, and this alone shows it is a humanitarian, not a political, issue.

He added, “We cannot allow this law to pass through with the votes of the United Arab List.”

Wadih Abu Nassar, an expert on Israeli political affairs and director of the Haifa-based International Center for Consultations, told Al-Monitor the United Arab List's opposition to the law was anticipated but Abbas’ consent went beyond all expectations.

He said Israel is against the family reunification of Arab couples in Israel, as it believes it would increase the Arab population in Israel, which is a disturbing idea for the Israeli authorities.