Defense Minister Benny Gantz decided to legalize the status of some 4,000 Palestinians who live in the West Bank but are not properly registered. 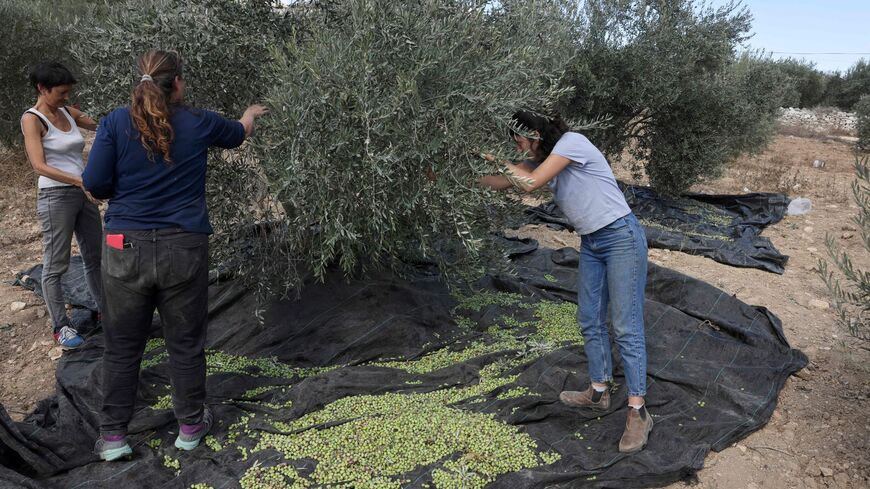 Israeli activists of the Rabbis for Human Rights organization help Palestinian farmers harvest their olive trees in the Palestinian village of Burin near Nablus, in the occupied West Bank, on Oct. 19 . - MENAHEM KAHANA/AFP via Getty Images

Israel announced Oct. 19 it had officially legalized the status of 4,000 Palestinians living in the West Bank. For the first time in a decade, the Israeli defense ministry allowed the Palestinian Authority to update the status of 4,000 people in its population registry. With a Palestinian West Bank resident card or updated registrations of their address, these people can now apply for work permits in Israel and  travel abroad through the Israel-Jordan Alenby Bridge crossing point.

Out of the 4,000 Palestinians announced yesterday, 1,200 are considered stateless or status-less —people who were born and raised in the West Bank, but have never been issued a Palestinian identity card for various reasons. These reasons include children born at home and never registered properly, people who had entered Palestinian territories in recent years, got married there and stayed without registering, and residents of Palestinian territories who went to live abroad before the 1993 signing of the Oslo Accords and got their identity cards revoked.

The other 2,800 are Palestinians who lived in Gaza but fled before the 2007 takeover of Hamas and then settled in the West Bank. These people are currently registered as residents of the Gaza Strip, even though they have not lived there for many years. They will now be able to change their address in the Palestinian population registry.

The Palestinian Authority has been demanding for many years that Israel regularize this situation, which affects hundreds more people on top of the 4,000 now authorized. The problem stems from the fact that according to the Oslo Accords, Ramallah cannot issue valid identity cards without Israeli approval. Thus, many Palestinians have lived in the West Bank for decades without official recognition, living under a constant threat of deportation.

The Israeli decision is part of an ongoing effort by the government, championed by Defense Minister Benny Gantz, to strengthen the Palestinian Authority and the status of Palestinian President Mahmoud Abbas, and to better the living conditions and economy of Palestinians in the West Bank and in Gaza.

Reportedly, this recent move was agreed upon already in August, at the meeting that took place in Ramallah between Gantz and Abbas. The meeting in itself signaled a change from the Netanyahu government policy of weakening Abbas and encouraging the rift between the West Bank and Gaza. Another measure proposed by Gantz at that meeting was a 500 million-shekel loan to the Palestinian Authority. He also proposed the registration of thousands of West Bank Palestinian businesses for digital payments, thus ensuring the Palestinian Authority receives an added 10 million shekels in taxes from those businesses. Instead of Israel collecting those taxes and transferring them to the Palestinian Authority – a process often subjected to political and technical obstacles – the payments will be made directly to authorities in Ramallah.

Prime Minister Naftali Bennett said after Gantz’s Ramallah visit that he himself has no intention of meeting with Abbas. On the other hand, Bennett did not hinder the economic and civil measures advanced by Gantz.

Referring to the September manhunt against Palestinian prisoners who escaped the Israeli Gilboa jail, Gantz had said, “Israel has no intention of harming the daily routines of Palestinians and we are ready to bring economic and humanitarian concessions and to strengthen the coordination with the Palestinian Authority.” Meretz party ministers have also met in recent months with Palestinian counterparts in Ramallah, in order to strengthen cooperation in health, energy, environmental protection and more.

Today, Coordinator of Government Activities in the Territories Rassan Aliyan announced that the number of Gaza merchants permitted to enter Israel will be increased by another 3,000. The move, which will raise the total quota to 10,000, will take effect from tomorrow.

This new government policy of strengthening the Palestinian Authority and battling the economic crisis  has not necessarily calmed tensions in the West Bank or in east Jerusalem. The past few days saw several reports about minor incidents and disturbances near Jerusalem’s Old City. Tensions grew high Oct. 19, with at least 22 people arrested for allegedly hurling stones at passing vehicles near the Damascus Gate and disturbing traffic. Clashes were also registered in the Jewish quarter in Hebron, with one Israeli soldier injured. Reports additionally said Palestinian rioters threw a Molotov cocktail bottle at an Israeli security post near West Bank Kalandiya.

Violent clashes between police and Palestinians near the Damascus Gate and in Jerusalem’s Old City had played a key role in the escalation of tensions in May, which in turn generated an 11-day conflict between Israel and Gaza.