Arab grants and financial aid to the Palestinian Authority (PA) have decreased since the beginning of this year by more than 81% compared to last year, exacerbating the financial crisis facing the PA. 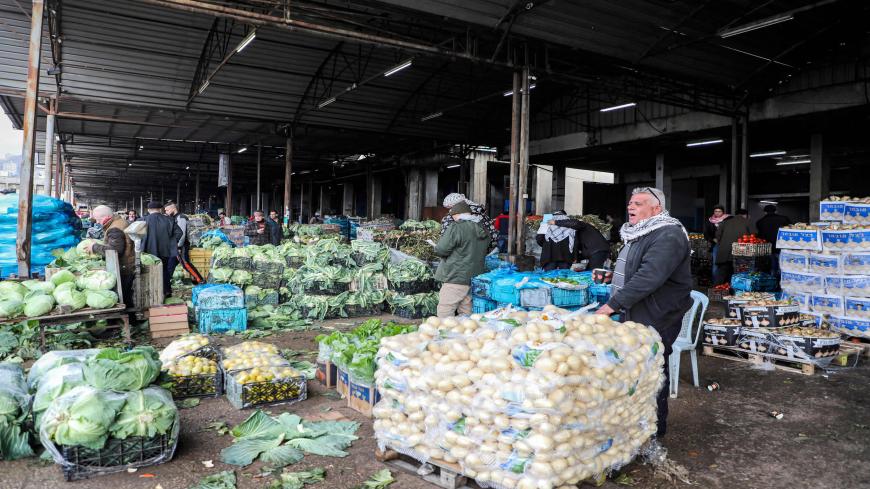 A produce market in the city of Nablus following the announcement of Israeli Defense Minister Naftali Bennett to halt imports of all agricultural goods from the West Bank into Israel, Feb. 2, 2020. - JAAFAR ASHTIYEH/AFP via Getty Images

RAMALLAH, West Bank — The Palestinian Authority (PA) is witnessing one of its worst financial crises as it finds itself unable to fulfill its obligations toward the Palestinians with no light at the end of the tunnel.

Many reasons are behind the current crisis. Chief among these are the local economic repercussions of the coronavirus pandemic that led to a decline in the domestic revenues collected by the PA. Prior to that, US aid to the PA was halted due to the PA’s rejection of the US president’s peace plan in the Middle East, known as the “deal of the century.” Also, the PA stopped accepting clearance funds collected by Israel since its decision in June to end all agreements signed with Israel. And most recently, there has been a decline in Arab financial grants and aid allocated to the Palestinian state budget.

According to the Palestinian Ministry of Finance, Arab financial aid and grants for the Palestinian budget decreased by 81.6% during the first eight months of the year. This year, according to the ministry, the total grants and aid amounted to 132.3 million Israeli shekels ($39.2 million) from the beginning of the year until late August compared to 716 million shekels ($212 million) during the same period last year.

The Palestinians attribute the reason behind this decline to the economic repercussions of the coronavirus pandemic on some countries such as Algeria on the one hand, and to some countries’ responsiveness to the US decision to stop aid to the PA on the other.

Ahmad Majdalani, a member of the PLO's Executive Committee, told Al-Monitor that the reason behind the decline in support of some Arab countries for the PA is their submission to US President Donald Trump's decision to cut aid to the PA.

Prior to the signing of the normalization agreement between Israel, Bahrain and the United Arab Emirates (UAE) on Sept. 15, Trump said during a meeting with Israeli Prime Minister Benjamin Netanyahu that the Palestinians were dealing with wealthy countries that financed them. “Why did you pay when they treat the United States with such disrespect?” he added.

Majdalani said, “Unfortunately some Arab countries [that he did not mention] have obeyed Trump’s decision and have officially informed us that the US administration asked them to refrain from supporting and financing the PA. These countries have told us, ‘We will not be able to assist you moving forward.’”

He noted that instead of implementing their decision to activate the Arab safety net that they previously approved in support of the Palestinians, Arab countries are currently developing a network of pressure and extortion in conjunction with US pressure.

Majdalani stressed that the decline in financial support for the PA reflects a decline in the official Arab position and indicates that Arab countries are reneging on their obligations toward the Palestinian people while choosing to join the US project aimed at solving the Palestinian issue without achieving Palestinian rights.

Also, the remarkable progress made at the level of reconciliation between Fatah and Hamas is one of the reasons behind the decline in Arab support.

Saleh al-Arouri, deputy head of Hamas’ political bureau, said in statements to the movement’s Al-Aqsa satellite channel on Oct. 17, “There are Arab countries that have stopped financial support for the PA based on a US decision. Arab countries have contacted Fatah to inform it that the United States is against the path of national unity with Hamas.”

Azm said that the US efforts to pressure the Palestinians are crystal clear. The United States, he said, is inciting against the United Nations Relief and Works Agency for Palestine Refugees in the Near East and calling for its funding to stop, all the while raising the issue of prisoners and the support provided for their families to incite against the PA.

The European Union is currently the biggest donor to the Palestinians, but recent reports have suggested that the EU would halt its support for the PA if it refuses to receive clearance funds from the Israeli side.

According to Azm, however, the EU did not indicate its intention to stop aid to the PA, and European embassies are currently discussing the aid that they will provide for the next year. He noted that European countries are supporting certain sectors through vital projects.

The PA crisis lies in the lack of financial liquidity, and this has prevented it from paying the salaries of public employees in full for the fifth month in a row, let alone covering current expenses and fulfilling its commitments toward poor families.

Nasr Abdul Karim, a professor of finance and economics at the Graduate Studies Department of the Arab American University, told Al-Monitor that the halt in the Gulf aid to the PA is linked to the recent Gulf-Israeli normalization deals. This normalization, he said, is the fruit of yearslong secret relations and contacts. He noted that Gulf countries were influenced by the US decision to stop supporting the Palestinians.

Abdul Karim said that Arab support for the PA may stop for good in the coming year, and this will definitely take its toll on the PA, which is going through its worst financial crisis caused by the 40% decline in domestic revenues due to the coronavirus pandemic. He said that the PA stopped accepting clearing funds from Israel, and these account for about 65% of the PA total revenues.