Why did Saudi Arabia halt its aid to Palestinian Authority?

The Palestinian government announced recently that Saudi Arabia has not been paying its monthly aid to the Palestinian Authority since April, which will negatively affect the economy. 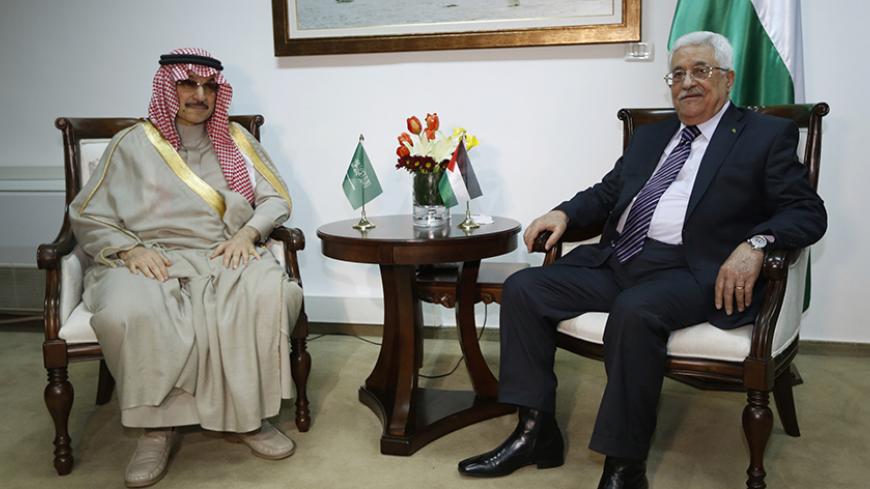 The Palestinian government continues to talk about its fiscal deficit and questions its ability to meet Palestinians' economic needs. Most recently on Oct. 24, Palestinian Prime Minister Rami Hamdallah said that the Palestinian Authority (PA) is facing a severe financial crisis, calling on nations and donors to fulfill their obligations toward the Palestinians per the Oslo Accord signed between Palestinians and Israelis in 1993.

On Oct. 30, the director of the Budget Department at the Palestinian Ministry of Finance, Farid Ghannam, pointed to Saudi Arabia's failure to meet its financial obligations toward the PA since April, noting that the value of this seven-month failed contribution is estimated at $140 million. Ever since January 2013, Riyadh has raised the sum of its monthly financial support to the PA from $14 million to $20 million.

On Oct. 26, Ahmad Majdalani, a member of the PLO's Executive Committee, confirmed that the PA has not been receiving financial support from Saudi Arabia. He attributed this to economic factors in light of the Saudi Treasury’s economic crisis due to the war it is fighting in Yemen and the oil prices slump.

Al-Monitor tried to contact Ghannam several times but to no avail. However, a former Palestinian minister of economy who is familiar with the PA’s financial status, told Al-Monitor on condition of anonymity, “The PA wanted to keep Saudi Arabia’s failure to provide financial support away from the media, because it does not want to create any tension. The PA’s officials contacted their Saudi counterparts to find out the reason behind the delay in funds but have yet to receive any answers.”

In addition to Saudi Arabia’s failure to meet its financial obligations toward the PA, the relationship between the two parties has been declining against the backdrop of President Mahmoud Abbas’ failure to reconcile with Hamas and to respond to the Arab Quartet’s demands to allow Mohammed Dahlan back into Fatah's ranks after Abbas dismissed him from the movement in May 2011. The internal Fatah dispute is also a reason for the decline in the PA’s relationships with Jordan, Egypt and the United Arab Emirates (UAE).

Jamal Nassar, the chairman of the budget committee in the Palestinian Legislative Council (PLC), told Al-Monitor, “Saudi Arabia's failure to pay its share of support for the PA is mainly due to political reasons in light of the chill in the political relations between the two. The lack of Saudi support will certainly affect the PA’s budget and this will be evident in future measures such as reducing the government expenditure in vital aspects such as staff salaries and operating expenses, per the finance minister's decisions.”

On Sept. 15, a World Bank report stated that the Palestinian economy is facing a budgetary crisis because foreign aid to the PA dropped by 50% in the past three years, putting huge pressure on the budget.

For his part, Palestinian Foreign Minister Riyad Malki said Sept. 9 that foreign support for the PA dropped by 70% compared to 2014 and 2015. The PA’s financial situation requires seeking new sources, like the Arab states, to overcome the tough situation. He demanded to supply an Arab security network that would give the PA $100 million monthly to face its financial crises and pressure.

Nasser Abdel Karim, an economics teacher at Birzeit University, told Al-Monitor, “Stopping Saudi support might not have a negative impact on the Palestinian budget. The proof is that the PA is paying its employees’ salaries normally despite the halted Saudi aid since months. The PA is increasingly relying on financial resources from taxes, customs, fees and offsetting charges. These amount to around $250 million per month, which means Saudi Arabia's $20 million constitute less than 10% of Palestinian local funds. The Saudi decision will not have a huge impact. However, it might push the PA to austerity measures and expenditure cuts to maintain its financial stability.”

Palestinians are well-aware that the Gulf states’ financial aid, like Saudi Arabia’s, is conditional, even if indirectly. The aid banks on the PA’s commitment to the general political line of the kingdom. When Palestinians deviated from this, the support of Saudi Arabia and the Gulf states stopped, namely as soon as late PA President Yasser Arafat supported Iraq’s invasion of Kuwait in 1990. It was then that the Gulf states decided to kick out the Palestinians living in these countries and cut off funding to the PLO before the PA was established in 1993.

Khalil Shaheen, the director of the Palestinian Center for Policy Research and Strategic Studies - Masarat, told Al-Monitor, “When Saudi Arabia halted its aid to the PA, it was clearly expressing the decline and coldness in relations between them. Palestinian officials’ statements reflected this decline on Sept. 1 when they attacked the stances of some Arab capitals [without specifying which ones] for meddling with Palestinian affairs and considered these interventions an Arab desire to impose tutelage on Palestinians. Perhaps the statements did not resonate well in Saudi Arabia, hence the decision to stop its financial aid to the PA.”

Although the PA has broken the silence and announced Saudi Arabia’s decision to halt its aid, the kingdom’s next step toward Ramallah is hard to predict as it has yet to confirm or deny said news. Will the aid halt persist, or will Saudi Arabia take back its decision and resume helping the Palestinians? And will this depend on the PA’s agreement to meet Saudi Arabia’s demands in the internal Palestinian issues like reconciliation between Abbas and Hamas, or Abbas and Dahlan?