Did PA receive Saudi reward for its support?

Saudi Arabia has resumed aid to the Palestinian Authority in a surprising move that raises questions about the kingdom’s motives behind the decision. 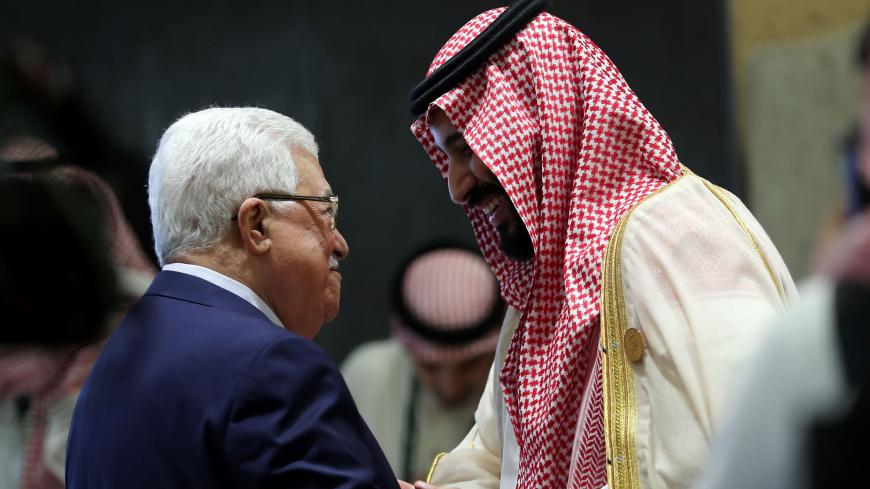 An ever-worsening financial crisis has been plaguing the Palestinian Authority (PA) since the beginning of 2018. Foreign support for its budget has been declining and it is expected to keep on doing so given the current political conditions. As a result, the PA will no longer be able to perform its duties and meet its economic, financial and social commitments. Its financial deficit for 2018 has already reached 2.6 billion Israeli shekels ($697 million).

In August, Washington cut $200 million in aid to projects in the Palestinian territories and to PA salaries, after the United States declared Jerusalem as the capital of Israel in December 2017 and transferred its embassy there in May. As a result, the PA had to take severe austerity measures that affected the salaries of its employees and reduced the budgets of many sectors of the government after foreign aid dropped by 70%.

However, in a surprising development, Saudi Arabia's ambassador to Egypt and permanent envoy to the Arab League, Osama Nugali, announced Nov. 11 the transfer of $60 million to the PA, as part of the kingdom’s monthly contribution for August, September and October 2018. He stressed that the kingdom will always support the Palestinian cause at various political, economic and humanitarian levels.

Although Nugali never mentioned rewarding the PA for its solidarity with Saudi Arabia, the resumption of its support for the Palestinians, which it had skipped the past three months without explaining the reasons, raises several questions, especially as to whether or not it is linked to the PA’s official position in solidarity with the kingdom over the killing of Saudi journalist Jamal Khashoggi in October inside the Saudi Consulate in Istanbul.

On Nov. 15, the Palestinian presidency praised the measures Saudi Arabia had taken regarding the Khashoggi case and reiterated its confidence in the Saudi judiciary. On Oct. 14, Palestinian President Mahmoud Abbas issued a statement stressing that Palestine would always stand by the kingdom. On Oct. 20, the PA announced its adoption of the Riyadh narrative of the Khashoggi case.

Saudi Arabia's relations with the Palestinians have been strained since November 2017 after Saudi Crown Prince Mohammed bin Salman asked Abbas to support the US vision of peace with Israel. The resulting tension led Saudi Arabia to cut support for several months.

By supporting Saudi Arabia in the Khashoggi case, the PA has challenged the Palestinian street that opposed the kingdom, be it through petitions demanding to reveal Khashoggi's killers or the positions of Palestinian writers who were disturbed by the Saudi behavior in this case. Meanwhile, worshippers prayed for Khashoggi at Al-Aqsa Mosque Nov. 16 in protest to Saudi Arabia’s role in the Khashoggi affair.

Khalil Shaheen, director of research at the Palestinian Center for Policy Research and Strategic Studies - Masarat, told Al-Monitor, “Saudi Arabia’s support shows that it was pleased with the PA’s position in Khashoggi's case. The PA has steered clear of disturbing the kingdom, which ended up granting it financial support,” although no such support was promised to the PA prior to the Khashoggi case.

Shaheen added, “The PA is well-aware that a regional alignment is forming and believes that by standing by Saudi Arabia, it will have the financial and political support it needs. It is no secret that President Abbas is satisfied with King Salman rejecting the US 'deal of the century' and not forcing Palestinians into policies they do not agree with.”

In May, Saudi Arabia announced in a statement to the Royal Court that its humanitarian and development assistance to the Palestinian people between 2000 and 2018 amounted to $6 billion, but the recent resumption of its support to the PA raises three observations in particular.

First, for Riyadh to resume its support for Ramallah without coordination with Washington does not seem like an easy task since it does not have the courage to challenge the Trump administration, given the tension between them over the Khashoggi case, which means Riyadh most likely got the US blessing before resuming aid.

Second, the resumption of Saudi support for the PA coincides with Qatari support for the Gaza Strip in October worth $150 million. This reflects the regional rivalry between Saudi Arabia and Qatar to increase their influence in the Palestinian territories.

Third, with this financial support to the PA, Saudi Arabia may want to overshadow its relations with Israel and stop any Palestinian objection to it.

Nael Mousa, professor of economics at An-Najah National University in Nablus, told Al-Monitor, “The latest Saudi financial support for the PA comes to stabilize its existence and enable it to manage its functions in the West Bank since the US and Israeli interests do not lie in causing chaos in the Palestinian territories. The Saudi aid is temporary, although Saudi Arabia never explicitly said so. The Saudi aid helps prevent the living conditions in the West Bank from deteriorating in light of the decreasing international support for the PA and the shaky Saudi-Palestinian trade relations. These relations have become limited to simple Palestinian exports to the kingdom such as cheese and olive oil.”

Saudi Arabia's support of $60 million came after Qatar's massive support to the Hamas-controlled Gaza Strip on Oct. 10, as it provided $150 million in emergency humanitarian aid to alleviate the humanitarian crisis in the besieged enclave.

This reveals Saudi intentions to stop Qatar from monopolizing financial aid to the Palestinians and attempt to compete with it in this role, especially in light of the escalating crisis between them since June 2017 when Gulf countries boycotted Qatar.

While Hamas thanked Qatar on Oct. 10 for backing Gaza, it has been silent about Saudi support for the PA, while Fatah has described Qatar's support for Gaza as deepening Palestinian division.

Jamal Nassar, chairman of the budget committee in the Palestinian Legislative Council, representing Hamas, told Al-Monitor, "Saudi financial aid to the PA is not enough to save it from its suffocating crisis. It is only temporary assistance, but it does not provide enough support to keep up with the increase in the PA's expenses. This aid is more about propaganda and has no real impact on the PA’s financial recovery.”

The PA’s staggering financial crisis coincides with a sharp drop in international support, which forces it to hold onto any support it can get. Perhaps Saudi financial support — albeit sporadic — is the only source of aid the PA can rely on right now.

The PA’s concerns about the imminent announcement of the US deal of the century bring it closer to Saudi Arabia, which is withdrawing support for this deal. Despite losing public support by standing by Saudi Arabia in the Khashoggi case, the PA is gaining much-needed financial support.