The Palestinian Authority keeps mum on the alleged visit of Benjamin Netanyahu to Saudi Arabia, as it does not wish to get on the wrong side of Riyadh. 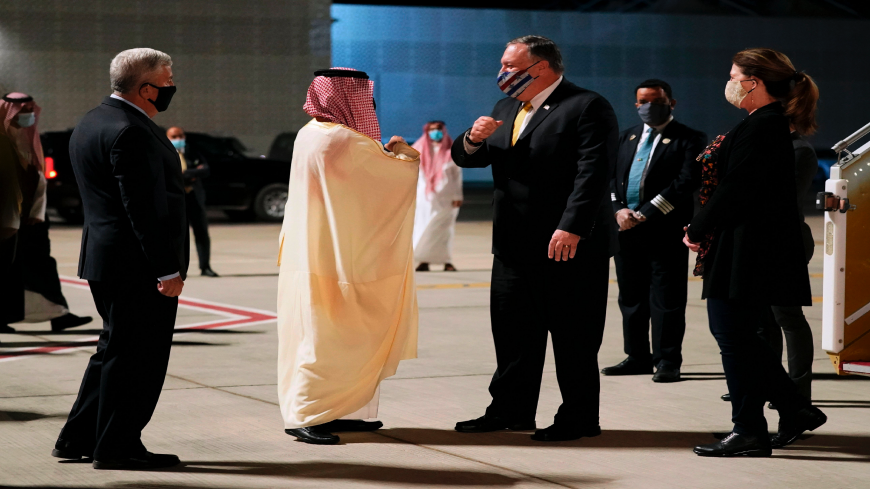 RAMALLAH, West Bank — The Palestinian Authority (PA) remains silent on what has been leaked about the visit of Israeli Prime Minister Benjamin Netanyahu to Saudi Arabia on Nov. 22, where he met with Saudi Crown Prince Mohammed bin Salman in the presence of US Secretary of State Mike Pompeo.

The PA and Fatah officials refuse to comment on the matter. Al-Monitor tried to contact several Fatah leaders, but they declined to speak on the record.

Al-Monitor, however, learned from sources in the Fatah movement that President Mahmoud Abbas has instructed officials not to address the normalization ties between Arab countries and Israel in the media.

“There is a decision not to talk about this in the media because the PA does not want in any way to send the wrong message to Saudi Arabia or lose its support. Riyadh is of major importance to us. But there is some news that it is best for us, as Palestinians, not to comment on,” a source in Fatah told Al-Monitor on condition of anonymity.

The PA is keeping mum as it does not want to face off with regional heavyweight Saudi Arabia, particularly since it has been attempting to reduce tensions with Arab countries that have normalization agreements with Israel. Saudi Foreign Minister Prince Faisal bin Farhan Al Saud denied Netanyahu’s visit in a statement Nov. 23, which came as comfort to the PA, sparing it some embarrassment for its decision to remain silent.

Since Abbas came to office in 2005, Palestine has joined the axis of moderate Arab countries led by Saudi Arabia along with Egypt and Jordan. Since then, the PA has been keen not to anger Riyadh, to consult with it on all of its political steps and to support all of the kingdom’s decisions, including the war in Yemen.

The PA’s silence on Netanyahu’s visit to Saudi Arabia can be read in the context of its stances toward the kingdom over the years. The Palestinian government is banking on the Saudi-declared position regarding its commitment to the Arab Peace Initiative put forward in 2002.

In a virtual interview with Reuters on the sidelines of the G20 Leaders Summit, which his country is hosting, the Saudi foreign minister said, “We have supported normalization with Israel for a long time, but one very important thing must happen first: a permanent and full peace deal between Israelis and Palestinians.”

The PA is also keen on distancing itself from its opponents in the region, namely the Iranian axis, all the while approaching the rivals of this axis, including the Iranian opposition. Fatah has participated in several conferences with the Iranian opposition over the past years. It is also careful not to criticize Saudi Arabia, making sure to renounce any statement by Palestinian leaders against Riyadh.

On Oct. 24, the Palestinian presidency issued a statement regarding the remarks of Abbas Zaki, a member of the Fatah Central Committee, saying that “Zaki’s comments during an interview on al-Mayadeen TV about Saudi Arabia and normalization [with Israel] does not represent the official Palestinian position, which does not tolerate any undermining of any brotherly Arab sovereign state.”

The statement also stressed “the depth of fraternal relations between the State of Palestine and the Kingdom of Saudi Arabia, which have always been based on mutual respect and appreciation between the people and leaders of the two countries.”

Zaki had said that “US President Donald Trump is revealing [the identity] of his collaborators one by one. Americans want to give Saudi Crown Prince Mohammed bin Salman a medal,” adding that Saudi Arabia is well aware that if it follows the path of normalization, “there will no longer be a Kaaba, no al-Masjid al-Nabawi and the future will be gloomy.”

Another reason that might explain the PA’s silence on Netanyahu’s visit is that it comes at a time when Palestinian officials have softened their stances against the Arab countries that normalized ties with Israel. The PA reinstated its ambassadors to the United Arab Emirates and Bahrain after having recalled them following the signing of the agreements with Israel. The PA also turned a blind eye to the visit of Bahraini Foreign Minister Abdullatif bin Rashid Al Zayani to Israel on Nov. 18.

Over the past months, the PA has been grappling with a devastating financial crisis for several reasons, namely the decline of Saudi aid by 77.2% during the first eight months of the year, dropping from $130 million last year to 107 million shekels ($31.7 million) at the beginning of 2020.

Therefore, the PA is hoping that by remaining patient and silent, Saudi money will start to flow again — especially with the end of Trump’s presidency, as he had requested Arab countries freeze aid to Ramallah.

The Israel Hayom daily, which is close to Netanyahu, revealed Nov. 23 the details of the prime minister's meeting with Salman, reporting that Saudis are interested in resuming negotiations between Israel and Abbas to reach a preliminary agreement and that Riyadh is willing to help transfer funds to the PA and the Gaza Strip.

Omar al-Ghoul, a writer and political analyst close to the PA, told Al-Monitor, “Saudi Arabia denied Netanyahu’s visit to the kingdom, which the PA [took at face value].”

He stressed that the PA is not weak and will not be weak in its positions. “The PA deals with reality in the Arab world without any exaggeration. As a political regime, it deals responsibly positively with the status quo in the region in order to avoid any unjustified loss,” Ghoul said.

“There has been a general unhealthy atmosphere in the Arab region, which the PA has to face in a positive way to protect the interests of the Palestinian people. The PA does not have to clash with any Arab country, and [it] is keen on establishing good relations with all parties and [keeping] bridges open with Arabs in light of the current difficult situation,” he added.