Relations between the Palestinian Authority and Iran have taken another bad turn, with a top Fatah official accusing Iran of worsening the Palestinian division by financially “adopting” families of Gazans killed or wounded in the Great Return protests. 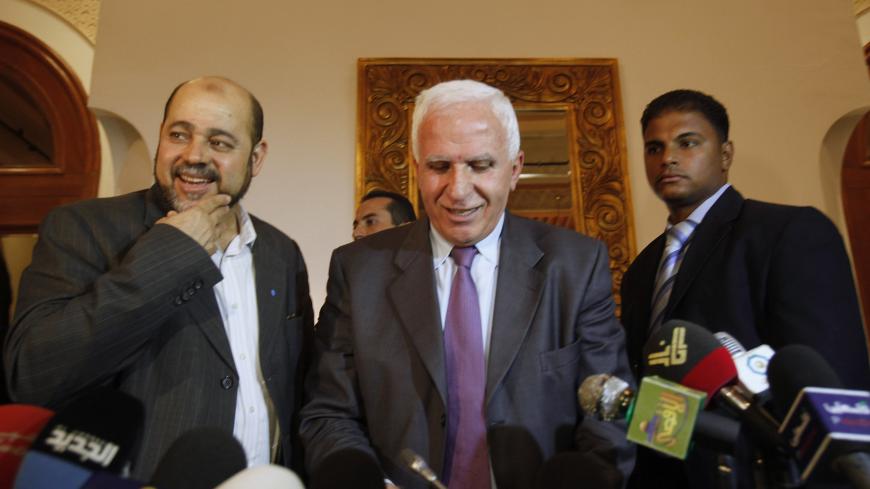 RAMALLAH, West Bank — There's no end in sight to the tensions between the Fatah-led Palestinian Authority (PA) and Iran, especially in light of Iran’s improving ties with Hamas. The PA pegs that improvement as the main reason for its failed attempts at reconciliation with Hamas and Hamas’ ongoing control of the Gaza Strip.

Azzam al-Ahmad, a member of Fatah’s Central Committee and the PLO's Executive Committee, made scathing comments against Iran on Nov. 27, saying it's the No. 1 sponsor of the rival Palestinian factions' division.

The Fatah-led PA controls the West Bank. Hamas, which is considered a terrorist group by the United States, the European Union, Israel and several other countries, ousted Fatah from ‎‎the Gaza Strip in 2007. The PA, however, still controls Gaza's purse strings and uses its financial power to try to control Hamas.

Ahmad said Iran is interfering with the internal Palestinian struggle by funding Hamas directly. He made his comments on the same day Iran announced, during the Islamic Unity Conference in Tehran, its decision to financially “adopt” families of Palestinians killed and wounded in the Great Return protests along the border with Israel. The weekly protests began last March.

In a TV interview, he said, “If Iran had good intentions, it would have adopted all of the Palestinian revolution martyrs. But it did not even adopt one martyr in Jerusalem, only those who were killed in Gaza, because it wants to ensure the continuation of the division — its trump card in political maneuvers.”

Ahmad’s remarks came after the Nov. 26 failure of the last round of reconciliation talks between Fatah and Hamas in Cairo under the auspices of Egyptian intelligence.

Iran didn't take long to respond to Ahmad’s comments. Iranian Foreign Ministry adviser Hussein Sheikh al-Islam told the Risala newspaper, which is affiliated with Hamas, “The adoption decision was made based on the recommendation of the Return and Resistance Committee, one of the Islamic Unity Conference committees,” adding that it is currently helping 500 families.

“We make sure to send our funds in secure ways so that they reach their recipients and beneficiaries, rather than through unreliable channels,” he said, in a jab at the PA.

The PA’s strained relations with Iran are likely to drag on. Fatah spokesman Atef Abu Seif told Al-Monitor, “Our stance toward Iran is based on several arguments. First, we refuse any external interference in the Palestinian political decision, which is exactly what Iran is doing by supporting Hamas.”

He added, "Any foreign support that does not pass through the PA further deepens the division and contributes to turning the Gaza Strip into an independent entity."

He criticized the decision to send aid to the Gaza Strip and not the West Bank. “Many martyrs fell in the West Bank and Jerusalem, but [their families] were not supported. The funds were allocated only to the Gaza Strip, which is part of the discrimination in the struggle. This is unacceptable, as it's not right for foreign parties to [interfere with] the Palestinian struggle.”

Abu Seif also charged that Iran is trying to forge ties with Palestinians apart from the Palestinian leadership, noting that Iran and Hamas are both parts of what is known as political Islam.

The PA has long accused Iran of deepening the Palestinian division and supporting Hamas, or of sending donations or aid to the Palestinians by bypassing the PA.

In February 2016, Iranian Ambassador to Beirut Muhammad Fath Ali announced Iran’s support of Al-Quds intifada that broke out in the West Bank. He promised to offer $7,000 to every family that lost a member in Jerusalem, and $30,000 for every family whose house was demolished by Israel.

This statement sparked a media clash between the two sides. Sheikh al-Islam, the Iranian Foreign Ministry adviser, said Iran would send funds through its own channels, which prompted PA government spokesman Nabil Abu Radina to retaliate by saying that bypassing the legitimate Palestinian leadership violated the law, including international law, and was unacceptable interference in Palestinian and Arab domestic affairs.

The PA is also diligent not to anger the Saudis in many cases. For example, despite accusations that top Saudis were involved in the October assassination of Saudi journalist and Washington Post columnist Jamal Khashoggi in Turkey, the PA issued a brief statement saying that Saudi Arabia is a state of justice, values and principle; the statement didn't even mention Khashoggi’s case. The PA has also kept silent on the Saudi war in Yemen. This can't be separated from Riyadh’s financial support to the PA, most recently with a $60 million transfer Nov. 11 to the Palestinian government's budget.

Hani al-Masri, director of the Palestinian Center for Policy Research and Strategic Studies (Masarat), told Al-Monitor, “Palestinians shouldn't be aligned with any of the region’s axes. We need to have the support of both the Arab countries and the region to our cause.”

He added, “Although the Palestinian leadership is more inclined toward the Saudi axis, it didn't sever relations with Iran. Palestinians should realize that Iran is not an enemy. This is a very important point. We have common [interests] with Iran, but Tehran’s project in the area does not benefit Arabs,” he said.

Masri stressed the importance of Palestinians strengthening ties in the region — including with Iran and Saudi Arabia — to serve the Palestinian cause.

Ahmad Jamil Azam, an international relations professor at Birzeit University near Ramallah in the West Bank, told Al-Monitor, “The tense relations between the PA, Fatah and Iran are nothing new. The PA believes that the same Palestinian faction that's dragging its feet in achieving reconciliation is receiving funds from Iran."

He added, “The PA is also discontented with the fact that, while many countries that support Hamas, like Turkey and Qatar, have maintained channels of dialogue with the Palestinian leadership, Iran makes no overtures in this direction."