The Palestinian government says it recently approved the National Strategy for Combating Money Laundering and Terrorism Financing in a bid to protect the economy, but many believe the step targets Hamas directly. 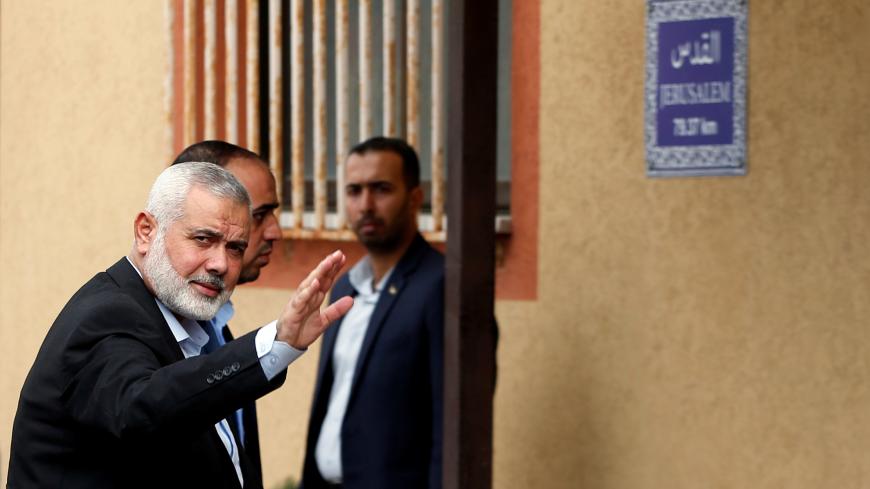 Amid the ongoing rift and faltering round of negotiations between rival Palestinian movements Fatah and Hamas, the Fatah-led Palestinian Authority (PA) is taking another step to crack down on Hamas activities in the West Bank.

In a not-unusual exchange of rhetoric, Hussein al-Sheikh, a member of the Fatah Central Committee, declared Nov. 27 that no reconciliation will take place unless Hamas ends its control of the Gaza Strip. Hamas spokesman Sami Abu Zuhri replied the same day, pointing out that Hamas won the Palestinian Legislative Council (PLC) elections in 2006 and Fatah lost. He said Fatah must stop being so arrogant toward Hamas.

But five days earlier, the Palestinian Cabinet took more concrete action, approving the National Strategy for Combating Money Laundering and Terrorism Financing. The strategy was cultivated by the National Assessment Team set up by Palestinian officials in 2016. The team represents public and private institutions as well as Palestinian civil society organizations.

In their decision, the ministers did not refer to Hamas by name, but President Mahmoud Abbas has used the word “terrorism” on several occasions this year in association with Hamas’ armed operations against Israel.

Samir Abdullah, a former Palestinian minister of labor and planning in Ramallah and a senior researcher at the Palestine Economic Policy Research Institute - MAS, told Al-Monitor, “Implementing this strategy is important for the Palestinian economy. The authorities need to be aware of the purpose, source and beneficiary of every bank transfer, even if this might affect banking secrecy."

A bank employee told Al-Monitor on condition of anonymity, “Every now and then, the PA provides Palestinian banks with blacklists that include names of individuals who aren't allowed to open bank accounts or whose accounts must be closed. These individuals are usually suspected of transferring funds from the Gaza Strip to the West Bank, especially in support of Hamas. When one of these individuals shows up at a bank to open an account, the bank employee apologizes for not being able to comply with their requests, based on PA instructions.”

Nazih al-Banna, an activist in the charity sector, told Al-Monitor, "The strategy reflects the PA actions against charities, which are facing tremendous difficulties transferring money from Gaza to the West Bank and vice versa. These difficulties have increased since June 2017, as banks started requesting the identity of bank transfer beneficiaries. They are also demanding invoices and documents detailing the charities’ bank transfers.”

Palestinian charities face harassment from Israel and the PA, which accuse them of providing financial support to Hamas, despite the absence of any evidence. Since the beginning of the Palestinian division in 2007, and especially in recent years, Israel and the PA have been keen on cutting off any source of financial assistance received by charities.

In addition to the PA’s efforts to confiscate Hamas funds, the Israel Security Agency, or Shin Bet, launched in September a large-scale campaign against the movement's funds in Jerusalem and the West Bank, seizing 300,000 Israeli shekels (roughly $80,600), along with jewelry and vehicles belonging to an undisclosed number of Hamas members.

A Palestinian official close to Abbas told Al-Monitor on condition of anonymity, “The PA is part of the international community and can't afford to [allow] any action that jeopardizes regional security … hence our ongoing crackdown on illegal money transfers within our lands.”

Further showing that this is an issue of concern for the PA, Prime Minister Rami Hamdallah spoke in July at a Ramallah seminar on the risks of money laundering and terrorism financing. Hamdallah said that to address the crimes, Palestinians will face regional and international challenges and must keep up with international efforts to enforce UN Security Council resolutions on terrorism financing.

Yahya Moussa, a Hamas deputy in the PLC, sees an ulterior motive in the PA's efforts.

"The PA is moving within an international and regional system aimed at protecting Israel by drying up Hamas’ financial resources," Moussa told Al-Monitor. "This strategy is an extension of US security control over the PA security apparatus. The PA has adapted its agenda to the whims of Israel and the United States in a bid to fight what it calls terrorism — thus dashing any reconciliation hopes with Hamas.”

Washington does seem to be involved in the PA's efforts to cut funding for armed groups. On Sept. 20, the US State Department confirmed that the PA was pursuing counterterrorism efforts and conducting investigations into financing sources. It noted that the PA laws criminalize the provision of any financial support for terrorism.

Islam Shahwan, a security expert and former spokesman for the Ministry of Interior in Gaza, told Al-Monitor, “This strategy involves the PA in the Islamic Military Counter Terrorism Coalition in Saudi Arabia." Such involvement has been evident as the PA pursues associations, businesspeople and traders while closing their bank accounts and confiscating their funds. The PA, Shahwan said, is also leading investigations related to charges of providing financial support to Hamas and moving funds to the West Bank from Gaza and abroad.

Hamas is facing great difficulties in the West Bank as the PA and Israel lie in wait to quash any of the movement's efforts to secure a foothold there, especially by transferring funds — regardless of whether the funds are intended to provide aid to families of Palestinians who were wounded or killed while fighting against Israel, or to establish an organizational infrastructure.

Since these actions are keen to rein in any Hamas activity, they could compel the movement to seek ways to circumvent this strategy.