Palestinian individuals and institutions are complaining about procedures implemented by the Palestinian Authority to monitor exchange office and bank transactions suspected of aiding Hamas. 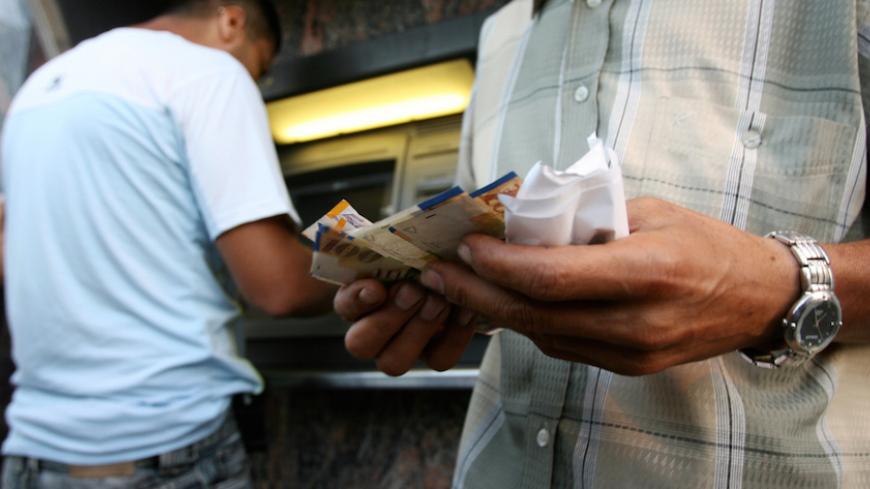 Palestinians rely on banks and money exchange offices for their financial transactions — but so do Palestinian factions abroad and their members in the territories. Therefore, the Palestinian Authority (PA) sometimes imposes strict policies on the offices, fearing money will reach Hamas-affiliated figures and institutions.

On March 28, Quds Net News Agency quoted what it said were well-informed Palestinian political sources as saying security forces have disrupted large money transfers worth millions of dollars to personal accounts and Palestinian institutions. The money, the sources said, was to fund activities against the PA. The security forces have tightened their auditing of these undisclosed accounts and have been scrutinizing banks to prevent money transfers to anti-PA parties.

These actions are related to the crisis in May, when numerous charities were left without support after Palestinian banks seized the groups' money transfers on the charge that they were affiliated with Hamas.

Mohammad al-Attal, head of the Student Friends Association in the Gaza Strip, told Al-Monitor recently that “some banks have been refusing to process money transfers from donors to charities since early 2016."

"As a result, we have accumulated $330,000 in debt, since we were forced to secure this amount to distribute aid to the needy and pay for the operational expenses of the association. When we headed to other banks, they refused to give us the IBAN [International Bank Account Number] due to security instructions they received from the PA, which wants to punish Gaza and its charities for political reasons.”

Munir al-Barsh, president of the National Association of Moderation Development, said the group has suffered under the PA procedures. “Thirty-one charity associations were no longer able to provide their services as a result of the PA’s pressures on banks. Moreover, banks refused to open new accounts for 50 charities and returned hundreds of bank transfers sent from the donors,” he told Al-Monitor.

“This halted 40,000 aid programs" involving $2 million per month. "The procedures affected 11 schools for orphans and disabled children, including 9,000 students, as well as 20 health centers frequented by half a million patients a year, and it deprived 7,000 university students of financial aid.”

The orphans’ aid program implemented by Human Appeal is one of the most important charity programs for Hamas. The international organization makes monthly transfers to beneficiaries on behalf of sponsors residing abroad, particularly in the Arab Gulf states. In addition to the bank checks disbursed to beneficiaries, Human Appeal also delivers in-kind aid to their homes.

Zayed Shukair, banking operations director at Palestine Islamic Bank, told Al-Monitor, “Banks have no problem handing down transfers to any institution producing legal documents. Sometimes, the transfers are directly handed to the beneficiary, which is a more transparent financial process. We do not mind handing down transfers to any association directly if the necessary supporting documents are provided.”

These charity organizations are thought by many to be an important financial resource for Hamas. Even if the movement does not directly benefit from them, the charities relieve it from a heavy financial burden by sponsoring tens of thousands of needy families in Gaza. The PA probably imposed restrictions on banks and associations to tighten its noose on Hamas.

A Palestinian security official in Ramallah told Al-Monitor on condition of anonymity, “The PA measures aimed at monitoring the bank accounts of individuals and institutions increased at the beginning of 2016 in a bid to reveal the nature and size of the transfers being made, especially when the transfer amounts to more than $500,000. In such cases, we are entitled to know the identity of both the sender and the recipient. After we monitored several transfers, we learned that these transfers are made by parties hostile to the PA with the aim of causing security unrest in the West Bank.”

Omayya Joha, a famous Palestinian cartoonist who often criticizes the PA, told Al-Monitor she was surprised a few months back when her bank account was closed. Joha would not disclose the name of the bank she had been using for five years. She learned her account was closed, like many others, because someone considered her close to Hamas and hostile to the PA. Joha was forced to open a new account.

Ayman Ayesh, director general of nongovernmental organizations in the Interior Ministry in Gaza, told Al-Monitor the ministry has received numerous complaints from Palestinians about the security measures.

“This shows the PA’s security encroachment upon purely humanitarian issues carried out by charities," Ayesh said. "Meanwhile, banks operating in Gaza have been refusing to accept our signatures insofar as bank accounts are concerned."

The Palestinian security follow-up has not been limited to banks; it has included currency exchange offices scattered across the Palestinian territories. Exchange offices in the West Bank have been repeatedly subjected to Israeli raids for allegedly transferring funds to Hamas militants.

In May, Palestinian security forces arrested journalist Mohamed Awad of Ramallah on charges of smuggling hundreds of thousands of shekels to Hamas through currency exchange offices. What’s more, many Palestinian journalists had their money transfers withheld by the parties they work with.

Raed Hamid, owner of a currency exchange office, told Al-Monitor he has been dealing with international companies to transfer money for years.

“At the beginning of 2016, however, we received instructions from the Palestinian security agencies about a blacklist including individuals and institutions to whom financial transfers should not be executed. The list is regularly updated," Hamid said. "For example, the disbursement of a transfer of $2,000 to any given citizen requires the approval of the security services and the identification of its source, even though some of the transfers are destined to the families of martyrs, prisoners and orphans.”

Parliament member Mona Mansour, a Hamas representative on the Palestinian Legislative Council, told Al-Monitor that the PA’s campaign against some bank accounts has been going on since 2006, following Hamas’ victory in the legislative elections.

“Some banks have even closed our own accounts out of fear of being accused of supporting terrorism, and they forced us, the elected [parliament members], to open new accounts with other banks at the behest of Palestinian security parties,” she said.

Banks and currency exchange offices have come to constitute a new front between Hamas and the PA, as the latter continues to tighten the noose on the movement, which is reeling under a severe financial crisis and is trying to manage its affairs in Gaza despite many harsh and unprecedented austerity measures.