​Palestinian banks in the Gaza Strip froze the accounts of dozens of associations and civil society institutions, sparking a wave of anger among them and the citizens who benefit from the services they provide. 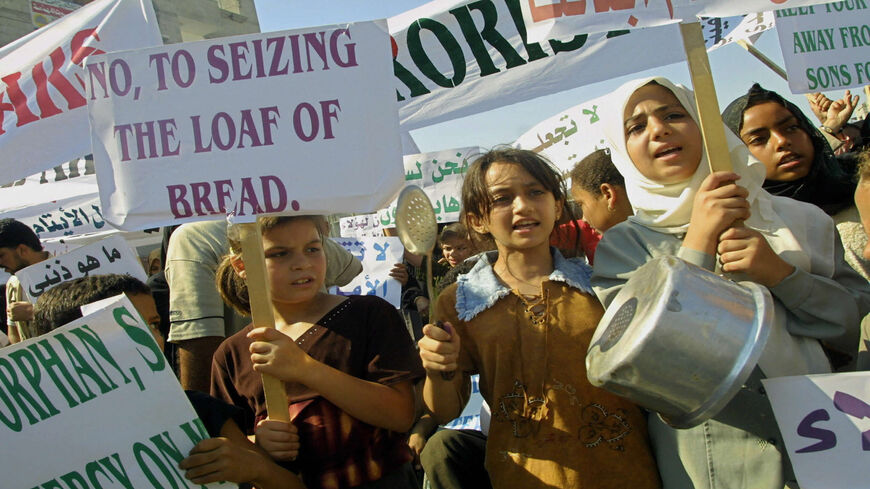 GAZA CITY, Gaza Strip — Palestinian banks in the Gaza Strip closed the bank accounts of dozens of associations and civil institutions, sparking anger among those associations and citizens who benefit from the services they provide — a step that prompted accusations against banks that they are tolerating Israel’s campaign against Palestinian civil society organizations.

In a Nov. 4 statement, the Palestine Civil Society Defense Coalition condemned the decision to freeze bank accounts, deeming it as an extremely dangerous step that undermines the Palestinian civil society and its active organization, especially since it was taken on the part of Palestinian national economic institutions that are supposed to serve the national economy in the context of the establishment of the Palestinian state.

The coalition called on the Palestinian Monetary Authority (PMA) and official Palestinian institutions to take urgent measures to protect civil society organizations from the banks’ arbitrary decision, and block Israel’s attempts to “encroach on our civil and national organizations.”

Some of the institutions impacted include the Al-Rahma Charity Association, Aman Palestine, Deir Al Balah Rehabilitation Society and Dar Assalam.

Ayman Ayesh, director-general of Public Affairs and NonGovernmental Organizations in the Interior Ministry in Gaza, told Al-Monitor that freezing the NGOs' bank accounts in the Gaza Strip is part of the banks’ measures against these organizations in the coastal enclave.

He said that the Interior Ministry has recently received several complaints from some 80 NGOs whose accounts were closed.

“When we checked with the banks, they told us they had directives to freeze these accounts until the NGOs have settled their administrative situation. This measure affects the associations’ financial flow, activities, administrative and strategic structures,” Ayesh added.

The Palestinian banks have yet to make an official statement about their decision. Meanwhile, in a statement Nov. 4, the PMA said that banks froze the accounts of the associations that had not renewed their license, had not held elections for public bodies for years and have yet to update the proxy of their authorized signatories in a way that contradicts their bylaws and the law requirements.

The PMA noted that these NGOs have the right to reactivate their accounts upon the completion of the aforementioned procedures and to update the proxy of their authorized signatories according to the legislation in force in the State of Palestine.

A source in one of the associations affected by the closures, speaking to Al-Monitor on condition of anonymity, said the association submitted its official files to the Ministry of Interior in Ramallah, to complete the procedures requested by the banks, but the ministry rejected the request citing "security reasons."

The Palestinian banks, however, are unlikely to reverse their decision for fear of possible sanctions by Israel as part of its fight against Palestinian civil society institutions labeled as “terrorist.”

Israeli Defense Minister Benny Gantz issued a decision Oct. 22, classifying six Palestinian institutions on the terrorist list, claiming that they have ties with the Popular Front for the Liberation of Palestine — a decision that was met with Palestinian and international backlash.

Israel brushed off all criticism in relation to its decision. On Nov. 7, Israeli media outlets reported that the chief of the Central Command in the Israeli army signed a military order designating six Palestinian human rights institutions as “terrorist” in the West Bank.

As per the decision, the Israeli army has the green light to take immediate action against these institutions, arrest their employees on suspicion of belonging to “a terrorist organization,” as well as to raid their offices and confiscate their belongings.

Ayesh said that the PMA wants to subject NGOs to a series of illogical procedures and force them to obtain licenses from the Ramallah-based Interior Ministry, despite having met all the legal requirements and administrative procedures with the Interior Ministry in Gaza.

He stressed that this falls within the framework of political rivalries between Palestinians.

Ayesh explained that Gaza’s NGOs have been indeed trying to renew their licenses and follow-up on all administrative matters with the Ramallah Interior Ministry, “[but] there has been a deliberate slowdown on part of the Ramallah ministry.”

He added, “The procedure may take up to six months to a year, which hinders the NGOs from meeting all administrative and legal requirements within the specified timeline."

Meanwhile, Mustafa al-Sawaf, a political analyst close to Hamas, told Al-Monitor that this was not the first time that Palestinian banks have frozen the accounts of NGOs that provide services to a large segment of the poor and orphans, accusing the banks of overlooking Israel’s war against the civil society associations in the besieged enclave.

“Banks are not taking decisions to serve the Israeli occupation,” he said.

Sawaf added that a finger is pointed now at the banks, stressing that the NGOs are seeking to open new accounts. He also denounced the PMA’s statement that he said justified the banks’ measures.

“It’s not within the PMA’s remit to monitor administrative work and monitoring the general elections, which are the prerogative of the Interior Ministry,” Sawaf said.

He stressed that what is happening falls within the political rivalry between Ramallah and the Gaza Strip. “This political game aims at pressuring Gazans and triggering angry protests against the Hamas government. This game is now known to everyone,” he said.

Sawaf made the link between the closure of the NGOs' bank accounts and the Israeli decision to classify some Palestinian human rights and civil institutions on its terrorist list, stressing that the Palestinian Authority and banks are cooperating with Israel to fight any party that provides aid to the Palestinian people and enables them to defend their rights.

The decree is in direct conflict with the decision of the Cairo talks that called for the respect of public freedoms, while the amended law restricts the right of assembly and organization, and the right to exercise activities independently from ministers and the executive authorities, turning NGOs into branches affiliated with ministries that will take over the roles of the organizations’ board of directors.

Moeen Rajab, an economic analyst, told Al-Monitor that the law amendment is in line with fierce Israeli attacks against Palestinian NGOs in order to tarnish the image of these NGOs before the international community and the donors, in a bid to cut off their funding and stop their activities in defending Palestinians’ rights in the face of the Israeli war crimes.

Commenting on the banks’ decision to freeze the NGOs’ accounts, Rajab said that banks should at least give the associations a prior notice to follow up on their administrative procedures before taking such a drastic measure and to inform them in writing and not verbally as has happened.

“Freezing bank accounts [of NGOs] will have a very negative impact on the citizens who benefit from the services provided by the NGOs,” Rajab concluded.