The National Bank opened its branch in the Dahiat al-Barid neighborhood in Jerusalem on April 17, allowing Palestinians to fulfill their banking needs in Israel without having to cross into the West Bank. 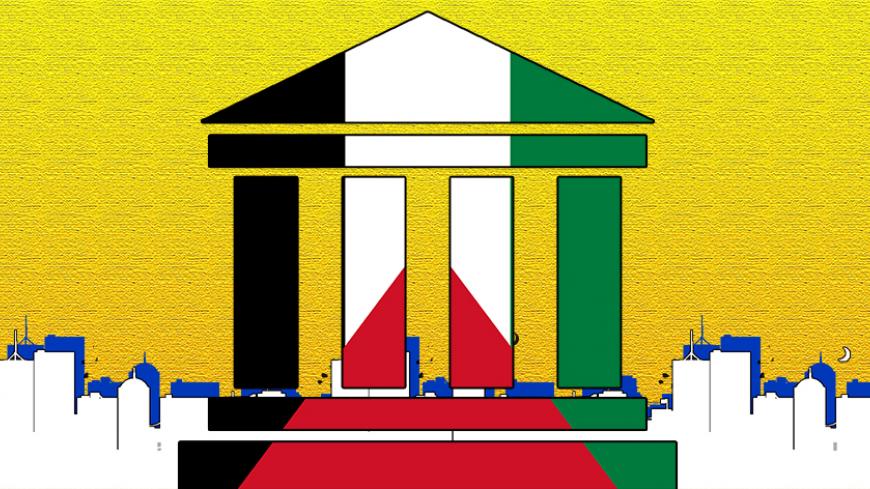 GAZA CITY, Gaza Strip — The National Bank (TNB) announced April 17 the inauguration of the Dahiat al-Barid branch in al-Ram, northeast of Jerusalem, in a first for banks in Palestine since 1967 after the annexation of East Jerusalem to Israel. Hundreds of Palestinian customers residing in Jerusalem have been flocking to the branch to open bank accounts and have their banking transactions executed by a Palestinian bank.

TNB’s move encouraged two other banks to take the same step. The Bank of Palestine and the Bank of Jordan obtained approval by the Palestinian Monetary Authority (PMA) but are waiting for equipment requirements to be met to start operating in the city of Jerusalem. The opening of bank branches aims to facilitate banking operations with the Palestinian Jerusalemites living on the other side of the separation wall, in light of the difficulty of movement from Israel to the West Bank to reach Palestinian banks.

“Since the beginning of our work, we have been looking forward to serving the residents of Jerusalem. We obtained the initial approval from the PMA two years ago, but we encountered some hindrances and procedures that delayed the opening,” said TNB general manager Ahmad al-Haj Ali. He told Al-Monitor that TNB had to meet several conditions set by Israel concerning the entry of supplies and equipment in order to open its new branch.

“Last year we obtained the needed approvals and permits from Israel, mainly the license to work in premises suitable to be operated as a bank,” he added, pointing to the difficulty of obtaining permits for Palestinians to construct new buildings in Jerusalem amid strict Israeli procedures and obstacles.

He said TNB rented a house dating to 1967 that, after some renovation and restoration, works for customers in Jerusalem.

He said TNB faced difficulties in bringing in devices, equipment and cables to connect the branch with the TNB head office in Ramallah, which required coordination with more than one Israeli authority. “The opening of this branch is a great achievement at the national, economic and commercial levels,” he said.

Haj Ali indicated the bank decided to open the new branch due to the longstanding lack of services for the Palestinian residents of Jerusalem, pointing out that many Palestinian Jerusalemites have been forced to deal with Israeli banks, as they had no other option in the absence of a Palestinian alternative.

As for the economic outcome expected from this step, he said the branch will contribute to financing the residents’ small- and medium-sized projects, which could curb unemployment and poverty.

He also noted that TNB launched a program to empower women economically by granting loans that will enable women to achieve their ambitions and projects, which could directly improve households’ income and help integrate Jerusalemite women into the labor market, pointing out that the poverty rate among Arabs has reached about 53%, according to 2016 statistics by the National Insurance Institute of Israel.

He said loans and financial aid will empower Jerusalemites to survive life crises with a better quality of life, which would encourage them to remain in Jerusalem and claim their right to the land.

Haj Ali asserted that the residents of Jerusalem and its environs have substantial financial and banking needs. “They are in dire need of Palestinian banks to meet these needs. The residents of Jerusalem had to travel for several hours and cross Israeli checkpoints to reach Palestinian banks in the Palestinian territories for a simple financial transaction that would have taken them few minutes if a branch existed on the Israeli side. Since the opening, customers have been flocking to open accounts, although the branch did not resort to any advertising activity.”

He also said the financial institution will be on the lookout for any illicit banking activity. “Israeli citizens shall be treated as foreigners. Before accepting to execute any transaction for Israeli citizens, we must identify the reasons why they chose to deal with us in order to avoid any money laundering or tax evasion attempts.”

He said the Palestinian banking system is weak and limited in the absence of an official currency and cannot compete with the strong and solid Israeli banking system.

The governor of the PMA, Azzam al-Shawwa, told Al-Monitor, “The approval granted by the PMA to three Palestinian banks in al-Ram comes as part of the PMA's efforts to deliver banking services to all citizens in different governorates. Al-Ram is a vital economic zone in Jerusalem, one of the most densely populated governorates with a population estimated by official bodies at about 430,000 people.”

He indicated that providing banking services to the residents of Jerusalem, home to several religious landmarks, many companies, and commercial and industrial enterprises and hotels, is economically profitable and falls within the scope of the PMA’s objectives to provide and distribute banking services across the country.

He pointed to the PMA’s constant efforts to support the people of Jerusalem by facilitating their access to sources of funding to enable them to develop their abilities to contribute to economic and community development.

Shawwa said that when licensing bank branches, the PMA takes into consideration the extent to which the bank applies best practices when it comes to equipping branches and takes additional security and safety measures in areas not under Palestinian control to prevent customers’ personal information from being leaked to Israeli authorities.

Palestinian banks also hope to see the PMA exert more efforts to expand the distribution of Palestinian bank branches across the Palestinian territories so as to boost the economy and promote development.

In the meantime, all eyes are on the newly opened or to-be-opened branches in Jerusalem to see if the facilities on offer will enable Palestinians to battle poverty and establish projects that contribute to the improvement of their economic and social life to support the Arab presence in Jerusalem.