Recent developments in the Palestinian village of al-Ram might indicate a long-term plan to demarcate a future border along the separation wall. 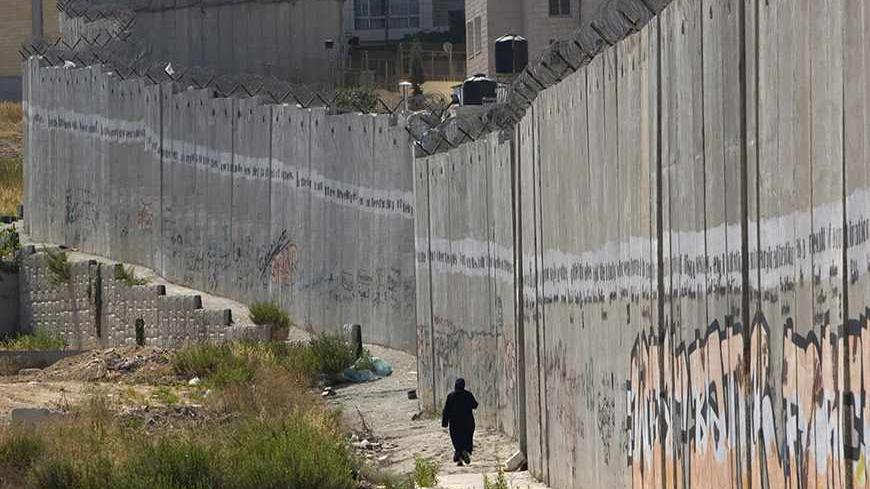 A Palestinian woman walks along the controversial Israeli barrier in al-Ram in the West Bank on the outskirts of Jerusalem, July 6, 2010. - REUTERS/Baz Ratner

The bustling town of al-Ram, with a population of over 25,000, is strategically located between Jerusalem and Ramallah. For a long time, the town’s geography was its blessing. Today, it has become its curse.

Al-Ram’s main entrance was once the Jerusalem-Ramallah road just past the suburbs of Shufat, Beit Hanina and Dahiyat al-Barid. But then the wall was built, dividing half of Dahiyat al-Barid and placing the entire town of al-Ram on the other side of the wall away from its normal access from either side of the Jerusalem-Ramallah road. All shops, including the recently opened branch of the Arab Bank, that were once on the main road suddenly found themselves facing a 10-meter-high wall with no access to either Jerusalem or Ramallah. To get to the two main cities, one must now exit the rear of the town, which is the most poorly maintained, least properly zoned part.

The population of al-Ram, made up almost entirely of east Jerusalemites with Israeli blue ID cards and yellow licensed Israeli car plates, suddenly found themselves surrounded and isolated. Residents must now take the long way to get to school, work or any other location that used to take minutes to reach.

Worst yet, the city has become a lawless area. Israel, which technically and legally is responsible for the security of al-Ram — as it is declared part of Area C — has totally ignored the town. Meanwhile, Israel does not allow Palestinian police to reach al-Ram because of the Oslo Accords, which consider Area C the sole domain of Israel for both security and administrative issues. The Israelis have provided east Jerusalemites living on the other side of the wall with some access to administrative services by allowing a branch of the post office and other offices within the nearby Qalandia checkpoint.

As for security, the Israelis have abandoned al-Ram and its inhabitants. This legal vacuum has been a bonanza for drug dealers as well as individuals on both sides of the wall who are running away from the law. Anyone wanted by either Israel or the Palestinian government can hide in al-Ram without being caught.

This state of lawlessness has gone on for years, but this week things changed. The Palestine News Network reported that over 600 Palestinian security officials entered the town and nearby Dahiyat al-Barid upon the request of local authorities and apparently after the approval of Israeli security. On the evening of Nov. 8, jeeps with the Palestinian government’s emblem, carrying armed security officials from the police, intelligence service and preventive police came from Ramallah to the town without any hindrance.

Some have argued that the presence of Palestinian security in an area that is supposed to be under Israeli security was approved for selfish reasons. The Israelis, who also appear to be suffering from this enabling environment for criminals to roam free, agreed to the intervention of the Palestinian police to safeguard themselves from the effects of a criminal-infested area so close to Jerusalem and Israel.

The more important question about the al-Ram campaign is whether this is temporary or permanent. Initially, and based on information quoted by the mayor of al-Ram, residents expected the police presence to last 10 days. But there has been no confirmation that they have withdrawn. Instead, rumors are flying that the presence of Palestinian police might continue and could be permanent.

Of even more importance is whether the Israeli security wall, which Israel has regularly insisted was not the border between Israel and Palestine, is quickly becoming just that. A recent article by former Israeli Prime Minister Ehud Barak called on his government to unilaterally withdraw from the West Bank, alluding to the Israeli-built security wall becoming the new border.

While the people of al-Ram breathed a sigh of relief when they saw criminals harassing them being picked up, some are wondering if this is the beginning of a long-term policy shift to allow Palestinian police to play a more prominent role in some Area C communities.

Other Jerusalem communities that, similar to al-Ram, straddle the wall and are criminal hotbeds include al-Izzariya, Abu Dis and Anata. If we see Palestinian security presence in these communities soon, the Palestinian nightmare that the wall — completely keeping east Jerusalem as part of Israel — will become the new border between Israel and Palestine.